One of the most frustrating things about debating feminists and feminist academics is how readily they reach for words such as “abuse,” “harassment” and “safety” – particularly, it seems, when they are losing the argument.

Yesterday I debated Dr Emily Grossman on women in science and, sure as night follows day, she reached for the same vocabulary afterwards, claiming on Twitter that she was “absolutely reeling” from the “mysogynistic [sic] backlash” and that she “hadn’t quite realised the extent of #everydaysexism.”

Absolutely reeling from the mysogynistic backlash my @SkyNews debate has received. Hadn't quite realised the extent of #everydaysexism. Wow.

That troubled me, because I hear this allegation a lot and I wouldn’t like to think that just because I have a large and enthusiastic fan base that women will stop debating me on important topics because of the bigoted social media backlash that follows.

For instance, I debated left-wing comedian Kate Smurthwaite on the BBC’s Big Questions a while ago and she, too, claimed that a barrage of hateful and misogynistic comments arrived on her doorstep after she lost her temper during the discussion. That time, once again, I couldn’t find an example of what she was talking about, and she wasn’t able to produce more than one or two decidedly contentious instances.

It seems mean-spirited to fact-check when a woman claim she feels attacked, but so often are important discussions shut down by these sorts of claims I thought it might be worth looking into this example, since Grossman is one of the more calm, respectable and erudite opponents I’ve been put up against. I’m also troubled by the “guilt by association” tactic some opponents use – Smurthwaite in particular.

FFS, this is probably the worst online barrage of online misogyny I've ever faced. @Nero do you think this is big or clever. It's horrible.

It seemed highly unlikely to me that someone as distinguished as Grossman would simply concoct allegations for sympathy on social media because she felt unhappy about the way the debate had gone. I messaged Grossman, asking her for examples of misogynistic tweets so I could name and shame the perpetrators. She declined to provide any.

So, in the interests of fairness and thoroughness, I did what I guess any feisty feminist academic would do in the situation: I had a researcher go through the tweets she received yesterday. All of them, in fact: 567 tweets and counting, as we go to press. It took a while. 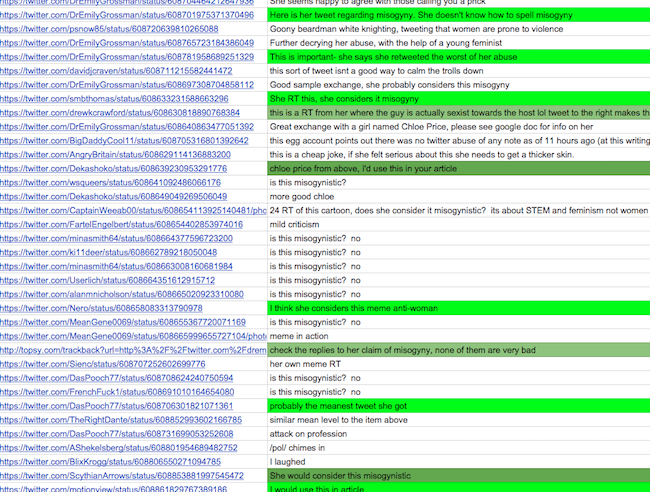 Of the 567 tweets we examined, many were supportive. Many, of course, challenge her and discuss her debate performance.

We found no instances of outright misogyny, though there were of course plenty of boisterous comments and lots of criticism of Grossman’s arguments. There were a few obliging comments about her looks, as there were about mine, but I presume Grossman is mature and sensible enough to take compliments as intended.

This is particularly weird because Grossman claims she retweeted the worst of the abuse. Yet an inspection of her Twitter feed reveals little in the way of hateful invective.

There was a little trolling and some slight meanness. I think anyone in the public eye is used to getting disobliging comments. It would be a shame to think that women find the slightest criticism grounds for complaint – though, of course, if you accept Dr Grossman’s view, in the video above, that women are delicate, fragile creatures, I suppose it’s possible she is practising what she preaches.

@DrEmilyGrossman @SkyNews "when you criticise them, they cry." Way to prove those misogynists wrong! #grrrlpower #wowjustwow #icanteven

As is so often the case, the most robust criticism of the feminist position came from other women: in particular, yesterday, from an animator called Chloe Price, who objected to Grossman’s arguments that women need special treatment in order to survive in competitive environments.

Price’s critique is strongly-worded, but it’s a stretch to accuse another woman of misogyny.

There is always the possibility that somehow the worst of the harassment was deleted between being sent and our analysis. But this seems unlikely: a contemporary tweet from an observer also claims that no harassment or abuse could be located at the time.

Our conclusion was that her claims are unfounded. (I suppose it would be cheap to observe that had Grossman really experienced the levels of “misogyny” she claims, she might be able to spell it.) In fact, the tweets directed at her were remarkably tame, by internet standards, particularly since she purposefully goads readers at several points: for example, by retweeting a comment about “pathetic and threatened men.”

The most charitable interpretation available is that Grossman, who was making jokes off-air in the studio about crying, abruptly lost her sense of humour when she sensed political advantage, retweeting comments like this that were clearly harmless in the context of the debate, during which crying was mentioned repeatedly.

I think @Nero has pissed off Dr. Emily Grossman on #skynews – Hope she didn't burst into tears afterwards pic.twitter.com/TqDcvWNR6b

We could find perhaps three tweets that crossed the line – but this is debatable. Even these three were not abusive or hectoring, per se, but they lacked the lightness of touch and good nature of the majority of criticism and could, if we were interpreting very generously, be seen as overly mean.

As you can see, any sexism on display is closer to Jack Kennedy than Jack the Ripper. And when you compare it to tweets I received, they pale. (Appearing on television to question feminist dogma is tantamount to blasphemy on social media: I’ll spare you the names I’m called on a daily basis.)

As it happens, the only instance of outright sexism we could find was from one of Grossman’s supporters: a gay man who complained that the presenter, Kay Burley, habitually “fawns over” blokes in a since-deleted tweet. (Grossman retweeted one of his other remarks.) When challenged, the individual admitted he rarely watches Sky News.

To those of us watching the antics of feminists and feminist academics, it can be tough to escape the conclusion that they deploy the word “misogyny” simply to indicate disagreement, and perhaps as a signal to white knights that they need backup because their arguments are failing.

That does other women a disservice, I think, because, as with racism, homophobia and all the other accusations of bigotry those of us on the right have to duck and weave around, over-used words lose their power to shock – and, ultimately, to damage. Just like all those fake rape claims on American campuses at the moment.

Which means that the next time someone really is unacceptably rude to a woman solely because of her gender, bystanders will be less affected by it and less likely to come to her aid and censure the offending tweeters.

Much of this, in the end, comes down to interpretation. Certainly, it can be disorientating and distressing when a television performance does not go as planned and one receives a lot of negative comments. But is criticism of a woman intrinsically different to criticism of a man? If you believe, as Grossman apparently does, that women need to be treated with kid gloves because they can’t handle challenges like men can, then perhaps you will find some of the tweets directed at her to be unacceptable.

But it seems a high bar to set a man who wants to debate a woman, that he should not only give her special dispensation in the debate itself but police the activity of every one of his (in this instance) 50,000 Twitter followers, and somehow insulate her from the joyful, irreverent style of internet commentators at large. 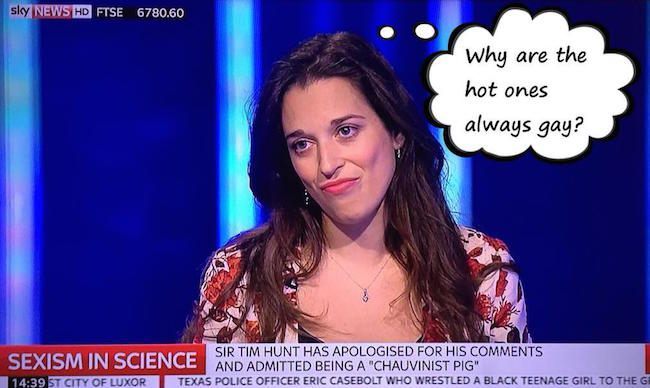 Grossman is a beautiful, accomplished and articulate woman, and we had a thought-provoking, spirited debate. What I don’t understand is: why did she feel the need to cook up charges of woman-hating afterwards? We are awaiting comment.