Trains from London to Europe have been turned back after reports of ‘protesters’ on the tracks, while roads in Calais are being set on alight after strike action by French Ferry Port workers. The perfect storm of incidents has rendered the English Channel effectively closed, with Britain’s Foreign Office telling drivers waiting at Calais to lock their doors to keep potentially violent, would-be migrants away.

Latest updates to this story will be added below this line 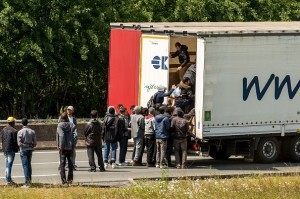 Migrants climb in the back of a lorry on the A16 highway leading to the Eurotunnel on June 23, 2015 in Calais, AFP PHOTO / PHILIPPE HUGUEN

UPDATE [6:00PM]: The deputy mayor of Calais has repeated the proposal to move the border frontier between France and England from the English Channel to the South of England itself.

By expanding French territory into mainland Britain, Calais authorities hope to kill the immigration bottleneck that leaves thousands languishing around the town hoping to get to England. They could then travel directly across the Channel to England before meeting a border guard.

Deputy Mayor Mignonet told journalists: “Calais is not the destination. As you’ve heard, (migrants) want to get into trucks, they want to get to England.

“England has got to realise that it is not our responsibility. The English border is in Calais and I’m requesting, such as (Calais mayor) Natacha Bouchart, for the border to be transferred back in Dover and in Folkestone.

“We can’t just accept any more, to be blamed for immigrancy. Again, they want to go to England, they are not coming to Calais, they go through Calais to get to England”.

UPDATE [5:05pm] More pictures are emerged of riot police on the tracks. You can see them all here.

UPDATE [3:50PM]: Eurostar has now said that train services will be closed for the rest of the day.

The story as of [3:30PM]: Eurostar has issued a statement: “Eurotunnel has reported tunnel closure; we’ll update shortly as to the likely impact on our trains,” with the French Twitter account stating, “Confirmation that due to French Port workers present on our tracks, our service is currently suspended.”

Britain’s Foreign Office has warned those in cars and trucks waiting to board ferries and trains at Calais that would-be migrants may try to forcibly access vehicles in their attempt to enter Britain, and slow-moving and stationary drivers should keep their vehicles locked.

Meanwhile, Kent Police in the UK have announced that Operation Stack is in effect, partially closing down the major road, the M20, from Dover to London. Stack effectively shuts off some of the roads to lorry drivers, and is costly to the businesses affected. The move is rarely implemented, and only in ever in crisis situations.

The UK government also warned, “There is a high threat from terrorism. Due to ongoing threats to France by Islamist terrorist groups, and recent French military intervention against ISIL, the French government has warned the public to be especially vigilant and has reinforced its security measures.”

Video obtained by ITV shows striking French workers being pepper-sprayed to get them off the roads.

The industrial action is believed to be ending at 8pm tonight, though the entire backlog could take up to three days to clear.