The German police union has spoken out about the volume of refugees flooding into the country, saying tens of thousands of arrivals are going undocumented because they lack the resources to adequately deal the problem.

German law required police to stop and fingerprint all migrants crossing the Austrian border into Germany, the most common route from the Mediterranean to Germany, and the wealthy Northern European states beyond. Police say the sheer number of people now crossing into Germany has totally overwhelmed the number of officers available, and their obsolete computer equipment is only holding the recording process up, reports TheLocal.de. 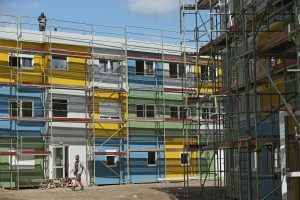 Berlin’s new container city to house migrants. Germany has built so many container homes for migrants, there is now a national shortage of shipping containers for conversion / Getty

Worse, once police have checked up on migrants arriving and looked for past evidence of criminal convictions, they are required to send the individuals on to the Federal Office for Migration and Refugees, but there is no sort of recording of whether they actually go or not. Police believe 45,000 people have entered Germany this year alone without permission, and without being recorded. Although some will continue on to other countries, many will have stayed, falling between the cracks to become invisible to the system.

As for the arrivals who are officially recorded and are therefore eligible for state aid, the resources available to accommodate refugees are now becoming severely limited as all reserves are becoming exhausted. While some newcomers are housed in converted hotels, commandeered old-people’s homes, and former town houses, many others live in vast tent and container cities. But now Hamburg police, where 200 to 300 new people arrive every day, are complaining the entire country is now running out of tents because demand is so high.