I am just completing my BA joint honours degree in Candy Crush and Rape Culture studies and wondered whether you could kindly advise me on my career options.

A bit about me: I’m a vicious sociopath looking for an utterly pointless job which pays me vast amounts of money while making the world an uglier place. Though I’ve considered applying to Goldman Sachs and various French arms manufacturers, they strike me as insufficiently evil for my purposes. Ideally this job should have a caring image so that hot chicks want to sleep with me. My skills include lying, puppy factory-farming, and burning ladybirds with a magnifying glass. I appreciate I might sound like a bit of a crazy mixed up kid. But I thought if anyone could solve my problem, it would be you….

As you can imagine, I get this kind of letter from the younger generation all the time. And up until now I’ve had no hesitation in telling these future masters-of-the-universe where to go:

“Head for Scotland, my son,” I tell them. “And get your snout deep into the wind farm trough. If you have no conscience, no morals, no aesthetic sensibility, no understanding of free markets; if you hate wildlife, people and the natural landscape, if you loathe private property, if you want to show how much you despise the traditions of the nation that once yielded Adam   Smith, James Watt, James Boswell, Charles Rennie Mackintosh and the rest, then the Scottish wind industry is undoubtedly the place for you.”

But I think in the light of recent events I may have to reconsider my advice. Obviously the Scottish wind industry remains as evil and pointless as ever it was – and the destruction it has wrought on the landscape of what was formerly one of world’s more strikingly beautiful countries has been truly spectacular. Only the Taliban at Bamiyan or ISIS at Palmyra can really come close to matching the wind industry’s scorched-earth zeal in places like Scotland, Ontario, Texas, Denmark, Australia and New Zealand.

This map, produced last year by the John Muir Trust, gives a good indication of how impressively these veritable Attilas of aeolian slaughter have done their work. 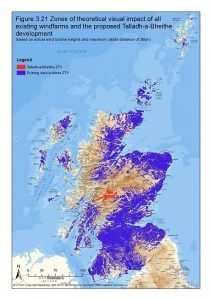 Scotland used to be a remarkably wild, unspoilt place. Not any more, though. There’s now only 40 per cent of Scotland left where wind turbines are not blighting the view. (And already that figure is out of date because lots more turbines have sprung up since like skeletons in Jason of the Argonauts, and many more are planned).

And let’s not forget the human cost: all those Scots whose rural tranquillity and health have been jeopardised by these bat-chomping, bird-slicing, subsidy-troughing eco crucifixes.

Sadly, though, it seems the golden age of renewable rapine may be drawing to a close. Cameron’s “greenest government ever” has finally decided to call quits on the vast subsidies which have been drawing unscrupulous rent-seeking corporatists to Scotland like sharks to blood. The renewables troughers are shrieking like staked vampires.

WWF Scotland director Lang Banks said the decision risked undermining the development of the cheapest form of renewables in the country, and was “bad news” for Scotland’s clean energy ambitions.

Jeremy Sainsbury, director of Natural Power, a renewables consultancy which employs about 300 people, mainly in Scotland, said the firm has opportunities to deploy its workforce to projects overseas.

But he added: “It’s not very healthy that Westminster has come out with this, which is clearly based on the views of some Tory MPs from middle England without really assessing the impact on investment in jobs in Scotland, or Wales for that matter, and without properly dealing with the implications in relation to the plans of those countries for delivery of their 2020 targets or their environmental commitments.

During First Minister’s Questions at Holyrood, she said: “I think it severely undermines any Tory claims to be pro-business.”

She added: “This decision comes despite the UK energy secretary admitting on radio this very morning that onshore wind is one of the most cost-effective ways of developing renewable energy.”

Ms Sturgeon argued that the move would also send out the wrong message ahead of a conference in Paris later this year aimed at getting a new global agreement on climate change.

The Scottish government believes the decision would have a disproportionate impact on Scotland, as about 70% of onshore wind projects in the UK planning system were in the country.

But personally, methinks Lady Macbeth doth protest too much. After all, long after her own name and that of her predecessor Alex Salmond are but distant memories, visitors to the blighted industrial zone formerly known as rural Scotland will be able to view their handywork on every hill top. It will be like the final scene in Spartacus, only with wind turbines instead of crucifixes.