Veteran British Comedian John Cleese has gone public with his support for Britain leaving the European Union, and has revealed a remarkable plan for the continental power bloc to improve its ailing fortunes in the absence of Britain.

Interacting with fans on Twitter after joking that his daughter’s pet dog was looking forward to Donald Trump building the United States border wall, he more seriously turned his attention to the European Union.

And his ire was not reserved simply for bureaucracy and democracy, but for the mass migration currently plaguing Britain:

We were usually swimming against the tide ; and the EU bureaucracy took away any trace of democratic accountability https://t.co/pkGNYyqTCF

It should give up the Euro, introduce accountability,and hang Jean-Claude Juncker https://t.co/JtN3VwKPRi

And he hit out at EU threats to Britain:

I rather thought that plan had failed. I'll call Jean-Claude Juncker and ask if this was why he was threatening us https://t.co/HcKG14ndEs

There's been trading for millennia. I can't see that stopping.And don't we buy more from the EU than they do from us https://t.co/chzz7eu0aD

I would have thought that limiting immigration more effectively would reduce competition for work and protect jobs https://t.co/0KnkdMMofv

I think you're trying to convert me to my own position

And took the fight to the Remanians:

A 'Remain' supporter attributes my sordid selfishness to my being a baby-boomer.No,I was born in 1939 – a 'Phony War' baby,according to Eric

The only sad thing is that so many people seem to believe that anyone who disagrees with them must be doing so for bad motives.

Reflecting the views of potentially millions of formerly undecided British voters, Mr. Cleese tweeted: “If I thought there was an chance of major reform in the EU, I’d vote to stay in. But there isn’t”.

If I thought there was any chance of major reform in the EU,I'd vote to stay in.But there isn't.Sad.Sorry,Paddy. 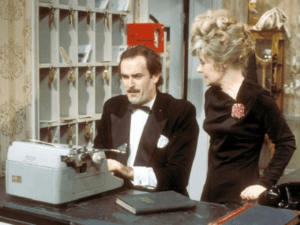 The tweet was inevitably followed by a torrent of support and abuse from Mr. Cleese’s nearly five and a half million Twitter followers.

Answering some points tweeted at him about the European Union, veteran comedian Mr. Cleese told followers about Britain’s lack of power to influence policy and legislation inside the European Union: “We were usually swimming against the tide ; and the EU bureaucracy took away any trace of democratic accountability”.

Mr. Cleese said the argument for leaving the European Union was about a lot more than just the money, which he called “the nub of the ‘Remain argument”, remarking that Britain had traded with the world for millennia without the EU. He also touched on mass migration, saying that while he wasn’t against migration itself but said it was worth “haggling over the numbers”, and that in his opinion “limiting immigration more effectively would reduce competition for work and protect jobs”.

As for what reforms the EU needed to survive, Mr. Cleese again mixed politics and humour, suggesting Europe do to with it’s Luxembourgian president Jean-Claude Juncker as the Italians did with Mussolini, as well as ditching the Europe currency which has dragged Greece to its knees and now threatens to do the same to France, as well as opening the bloc up to real accountability.

It should give up the Euro, introduce accountability,and hang Jean-Claude Juncker https://t.co/JtN3VwKPRi

Mr. Cleese’s expression of desire for Britain to leave the European Union is not by far his first foray into British politics. The comedian, who is perhaps best known for being a Monty Python co-founder but is also well regarded for his other comedy television shows and films is also a long-time supporter of the British Liberal Democrats, and their successor parties.

The Python’s long-time political interest in government being opened to accountability and democratic processes may have influenced his decision to back Britain leaving the European Union.