An elderly priest has been killed in a hostage situation in a church south of Rouen, Normandy, northern France this morning by alleged Islamist attackers. His killers, who are understood to have been shot dead by French police.

UPDATE 1630 — Arabic sermon given in church before kneeling priest executed France’s Le Figaro reports the eye-witness account of a nun who managed to escape the Normandy church this morning while it was under attack by Islamist killers and raise the alarm. The paper states that one of the “executioners” gave “an Arabic sermon from the altar”, and that deceased Father Jacques Hamel was forced to kneel before the men went for his throat with a knife.

The paper also reports both of the killers had fake guns and imitation explosives.

UPDATE 1530 — Arrest Linked to Killer An arrest has been made following this morning’s attack. French police said the man held in custody was connected to the terrorist who has so far only been identified as ‘AK’, who was the killer already known to security services and wearing an electronic tracking device.

UPDATE 1430 — Church was on terror hit list The Saint-Etienne du Rouvray church attacked this morning was on a terror list found on the computer of Sid Ahmed Ghlam in Aprile 2015, according to a report by Britain’s Sun. The paper states the computer came to be examined by the would-be terrorist after he accidentally shot himself in the leg while preparing an attack and called an ambulance in Paris.

The Rouen church was one of a number of places of worship on the Muslim’s lists of targets to hit.

UPDATE 1400 — Church killer was “known to security services”
At least one of the Islamists who was shot dead by police this morning after killing a Catholic priest was known to French security services. Britain’s Sky News reports one of the killers was even electronically tagged and was being monitored by counter-terrorism officers. Le Figaro reports the killer had tried to travel to Syria in 2015 but was forced to return.

He was charged with criminal association and being associated with a terrorist organisation and detained. He was later released with an electronic tag.

UPDATE 1320 — Islamic State claims responsibility, French President François Hollande confirms terrorist attack Media sources associated with the Islamic State have claimed the Rouen terror attack as their own, remarking that two of their own “soldiers” were responsible. Shortly beforehand the French President François Hollande told press that it was an act of terrorism and that both attackers had proclaimed their allegiance to the Islamic State. He called it a “disgusting attack”.

“Every day now we have a new story of bloodshed and European leaders need to face facts rather than spend their time trying to convince people this isn’t a problem. Juncker, Merkel and other EU leaders who oversaw the mass migration without any security checks have blood on their hands.

“May needs to up her game.

“Normandy, the home of the D-Day landings where thousands lost their lives to free Europe from fascist tyranny has today witnessed a different form of fascism.

“But we defeated the Nazis so we can defeat these murderers if our leaders admit to what we are facing.”

UPDATE 1240 BST — Pope Francis Condemns ‘Barbarous Murder’ of Priest in Normandy
In the written statement sent to Breitbart News, papal spokesman Father Federico Lombardi, said that the Holy See was “shocked” by this latest news, which is added to a whole series of violent attacks in recent days, “creating immense sorrow and worry.”

Lombardi said that the Pope “shares in the sorrow and horror over this absurd violence,” offering his “most radical condemnation” of the act as well as his prayers for the victims. 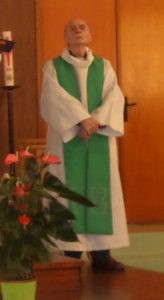 UPDATE 1230 BST — Image of slain priest
A picture of the elderly Father Jacques Hamel has emerged on Facebook. Eulalie Garcia, who works near the church, told the British Express: “He was someone who was treasured by the community. He was very discreet and didn’t like to draw attention to himself.”

He said: “I have learnt with sadness of the killing this morning at the Church of Saint-Etienne du Rouvray. The three victims: the priest, Father Jacques Hamel, 84, and the perpetrators of the assassination.

“Three other people were injured, one very seriously. I cry out to God with all men of good will. I would invite non-believers to join in the cry!

UPDATE 1145 BST — Front National Responds to Slaughter
Leaders of the surging populist-right party the Front National have responded to this morning’s attack. Party leader Marine Le Pen tweeted this morning, remarking that the low-tech, simple nature of the attack will strike fear into the hearts of the French. She said: “The terror continues in Rouvray. The modus operandi makes it clear that we have to fear new attacks by Islamist terrorists”.

Marine’s neice Marion Le Pen, meanwhile was also tweeting. She wrote: “They kill our children, murdering our policemen and slaughtering our priests. Wake up!”.

UPDATE 1130 BST — Murder in region famous for liberation of Europe from Nazism The church south of Rouen is just 30 miles East of the landing beaches where American, British, Canadian, and other Allied troops landed in 1944. The city was heavily bombed in the build-up to the liberation and was largely rebuilt after the war.

The city of Rouen sits on the River Seine in the north of France and is the capital of the region of Normandy. French heroine and “martyr” Joan of Arc was put on trial in the city in the Middle Ages, which retains a strong Christian ethos.

UPDATE 1110 BST — Priest named
The martyred priest who according to reports was either beheaded or had his throat cut has been named locally as 86 year old Father Jacques Hamel. He was ordained in 1958.

UPDATE 1050 BST — Police speak of ‘Islamists’
Fast-moving reports from Normandy this morning suggests the attackers shouted Islamist slogans including “Daesh” — Arabic for ‘Islamic State’ and “Jihad” as they entered the church. Other clues to the potential motive for the brutal attack that has seen a priest murdered — possibly beheaded according to reports — include reports of local police speaking of “Islamists” and the fact the French anti-terror prosecutor has been given the case to investigate.

The Story so far:

A hostage situation developed during the daily mass this morning when two attackers entered a church in Rouen, France and took a number of hostages. Between four and six hostages were thought to have been taken, however reports in French media including Le Figaro now suggest the priest leading the mass “had his throat cut” by the attackers.

Given that one hostage, thought to be the parish priest, was killed before police were able to end the situation a force spokesman has said there will be a “comprehensive review”.

Police sources report the two hostage takers were “neutralised” by police and are understood to have been shot dead.

France3  television Normandy reports police and special forces vehicles have arrived on-site and “a dozen shots” have been fired. A priest and a number of worshippers are understood to be among the hostages.