The German government has refused to award medals or give recognition to the two Italian police who shot Berlin attacker Anis Amri after pro-Mussolini pictures emerged from their social media accounts.

Days after the Berlin Christmas market terror attack which killed 12 and injured almost 50 others, the Tunisian migrant behind the attack, Anis Amri was found and shot dead in Italy. The policemen who shot Amri, Cristian Movio and Luca Scatà, were considered heroes by the German government and were to be awarded a medal until their social media accounts revealed hardline sympathies, Corriere Della Sera reports.

While German Chancellor Angela Merkel has thanked the pair for their actions in stopping Amri, the social media profiles and the hardline imagery are beyond the pale for the German government which has strict laws on the promotion of fascism or nazism.

The Instagram profile of Luca Scatà, the officer who shot Amri, showed him dressed in a Union Jack hoodie while giving the fascist “Roman” salute. The picture, taken in November of 2015, is tagged “Rome,” “Europe,” and “Roman Salute”. 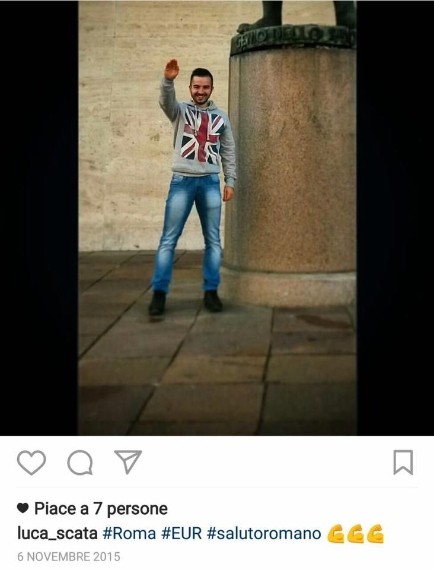 Also on Mr. Scatà’s Instagram was a picture of former Italian fascist dictator Benito Mussolini with a caption underneath the picture that described the former il Duce as “betrayed” by “infamous” traitors. The post, which was written on the 28th of April, the anniversary of Mussolini’s death, claims that Scatà is “on the side of that Italy, of those Italians, who did not betray and did not surrender”. 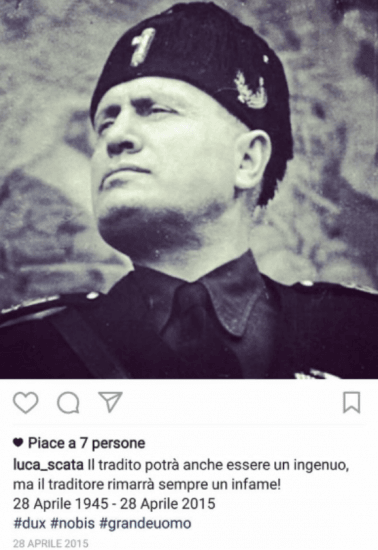 Cristian Movio, who was shot by Amri, also shared hardline posts on his Facebook page. Some of the posts were general anti-migrant slogans and pictures and one was a Coca-Cola bottle with the name “Adolf” on it.

Internal affairs expert Stephan Mayer of the Bavarian Christian Social Union (CSU), the sister party of German Chancellor Angela Merkel’s Christian Democratic Union (CDU), defended the government’s choice not to honour the pair saying, “The federal government’s decision not to give an award to these two cops is absolutely correct because of their obvious neo-fascist attitude”.

Both police officers were transferred from their posts after their names were revealed to the public. So far, there has been no word if they will face any disciplinary action over the social media posts.

Italy has become a hotbed for Islamic State radicalism over the course of the migrant crisis. Near where Amri was shot in Milan, the Libyan government claimed there was a terror cell operating in the region.

In December, an Italian intelligence report said the problem could be much larger than a few lone wolves, saying that an Islamic State general had smuggled in 400 fighters, all posing as asylum seekers.