BARECLONA, Spain (AP) — When crowds in downtown Barcelona fell silent for one minute Friday to honor the victims of the terrorist attack in the city, one thing was conspicuously absent: any reference to Catalan’s burgeoning independence drive.

As the separatist movement has gathered momentum in recent years and builds to an Oct. 1 referendum that the central government in Madrid argues is illegal, the Catalan flag has become a common sight in Barcelona, the capital of the wealthy region. The red-and-yellow flag with the blue star symbolizes its long-desired independence from Spain.

When the silent tribute began in the Placa Catalunya (Catalonia Square) and a few people raised both Spanish and Catalan flags, jeers rang out. People shouted, “Fuera la bandera!” — “Get rid of the flag!”

It was a poignant moment of unity for Barcelona and for Spain. There was a feeling of standing together after Thursday’s deadly van rampage in the city’s famous Las Ramblas district. 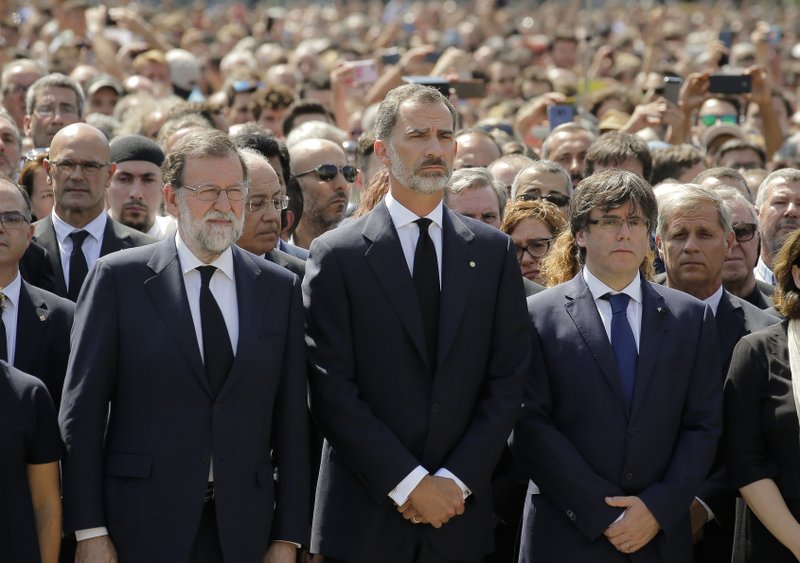 “We’re here for the victims and to protest what happened,” said Anna Esquerdo, a Barcelona store assistant. “This is not about anyone’s politics.”

The political friction seemed to melt away as authorities swiftly reacted.

Prime Minister Mariano Rajoy flew in from Madrid to consult about the security operation alongside Carles Puigdemont, president of the regional government, and Ada Colau, the mayor of Barcelona. The latter two are fierce supporters of the secession that Rajoy adamantly refuses.

In an editorial Friday, the daily newspaper El Pais urged officials to set aside their political squabbling and, specifically, their breakaway efforts.

“An attack on this scale must be a wake-up call that brings back to reality Catalan political forces, which, from the regional government to the regional parliament and pro-independence groups, have turned the specter of secession into the one and only issue on the Catalan political agenda in recent years,” the editorial said.

But Puigdemont sternly rejected such notions. Asked in an interview with radio station Onda Cero whether the attack had changed his political goals, he replied that terrorism “has nothing to do with” the drive for independence.

Fighting terrorism is a common, global effort, whatever people’s political preferences, he said.