Denmark has become the latest country in Europe to outlaw the wearing of Islamic face veils, in the same week that a study revealed nearly three-quarters of Britons would back a ‘burqa ban’.

A survey by the Pew Research Center found that 71 per cent of Britons said they supported a ban on the religious garment, which is associated with Islamic fundamentalism and the oppression of women.

As country after country in Europe enact their own bans in an effort to alleviate the continent-wide problems with social cohesion caused by self-segregating Muslim communities, such findings indicate support for UKIP’s 2017 manifesto pledge to ban the burqa in the UK.

The law on a full ban on face coverings was approved on Thursday by a parliamentary vote and will come into effect in August 2018.

Infringement of the law will result in financial penalties and anyone forcing a person to wear garments covering the face by using force or threats can be fined or face up to two years in prison.

Of all the liberal Scandinavian nations, Denmark takes the hardest line on integration and asylum-seeking.

Two women stand next to women wearing niqab as they visit the Senate on November 23, 2016 in the Hague, the Netherlands.
(Photo credit STR/AFP/Getty Images)

Austria passed a law in May 2017 which banned wearing full-face Islamic veils in public as part of a wider integration package.

Violators face fines, and after the legislation coming into effect in October 2017, some 50 fines had been issued as of the end of March.

High-profile radical Islamic extremists have defied the law, including Swiss activist Nora Illi who was detained by police in Vienna after she and three other women wore full-face Islamic veils in the centre of the city.

Algerian millionaire and political activist Rachid Nekkaz has promised to pay the €150 fines of any Muslim woman who falls foul of the law in Austria.

The Eastern European country has a Muslim community accounting for 15 per cent of its total population (7 million) but its parliament passed a nationalist coalition-backed law to fine and cut the benefits of women who cover their faces in public. 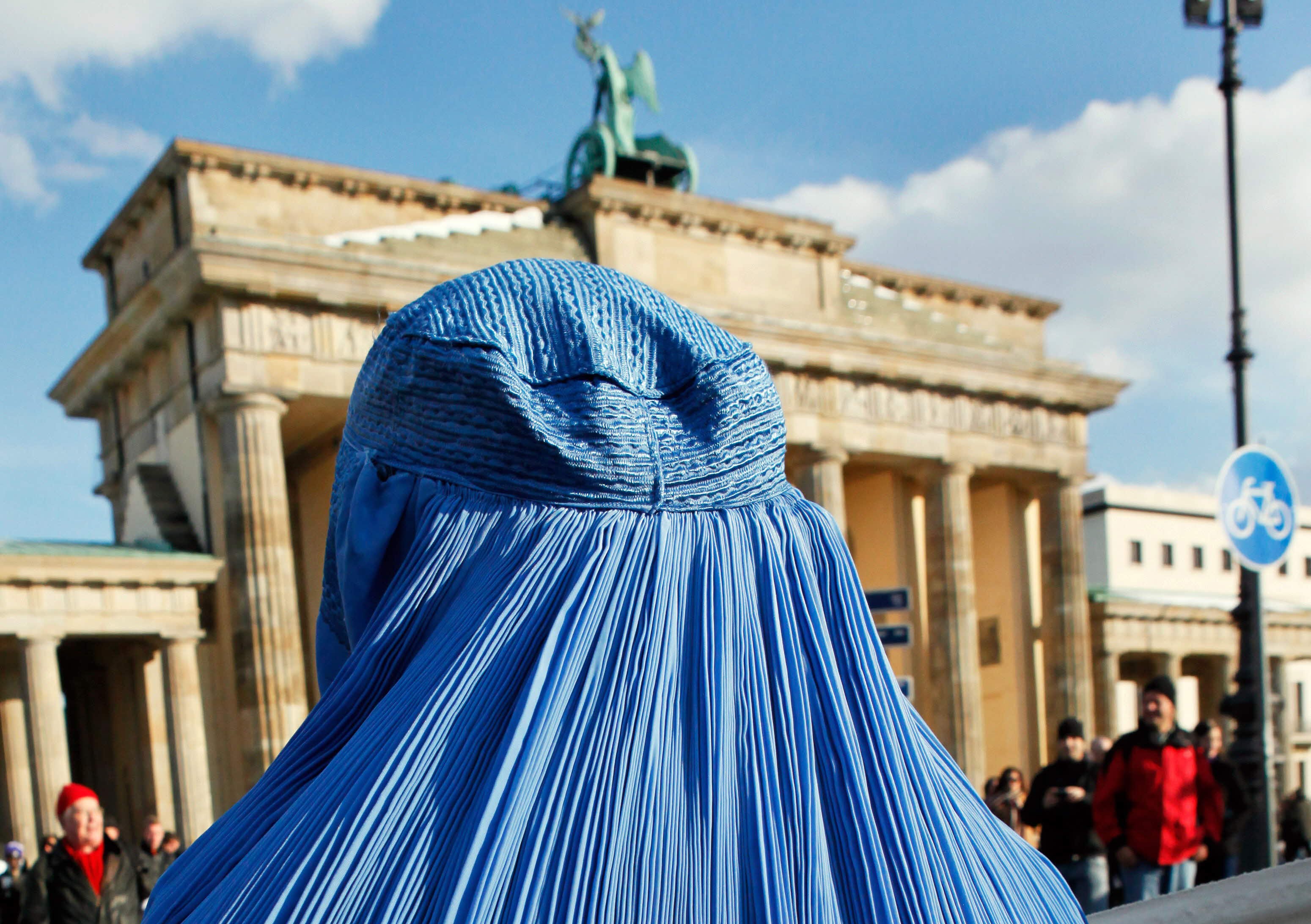 Picture taken on February 20, 2010 shows a woman wearing a burka during a demonstration against the German Bundeswehr army’s deployment in Afghanistan in front of the Brandenburg Gate in Berlin.  (Photo credit DAVID GANNON/AFP/Getty Images)

The Baltic republic banned the garment on security grounds, despite reports that only three women in the country were wearing them.

Replacing several regional bans on obscuring one’s identity, Belgium introduced a national ban on the full-face veil in the summer of 2011.

Belgium has a notable Muslim population in some Brussels suburbs, including the Molenbeek ‘no-go zone’ which has connections to well-known jihadist terrorists, including the perpetrators of the November 2015 Paris Bataclan attacks and one of the 2004 Madrid terror bombers.

Author and former editor in chief of Breitbart London Raheem Kassam wrote extensively on the no-go zone in his book No-Go Zones: How Sharia Law Is Coming to a Neighborhood Near You.

France became the first country in Europe to enforce a complete ban on the burqa. Any woman, French citizen or foreign national, could be fined for leaving their house with their face covered.

In the summer of 2016, several French seaside towns attempted to ban the shariah-approved swimming garment known as the “burkini”, but the regional laws were overturned by France’s highest administrative court.

France has the largest Muslim minority in Western Europe, at five million people. 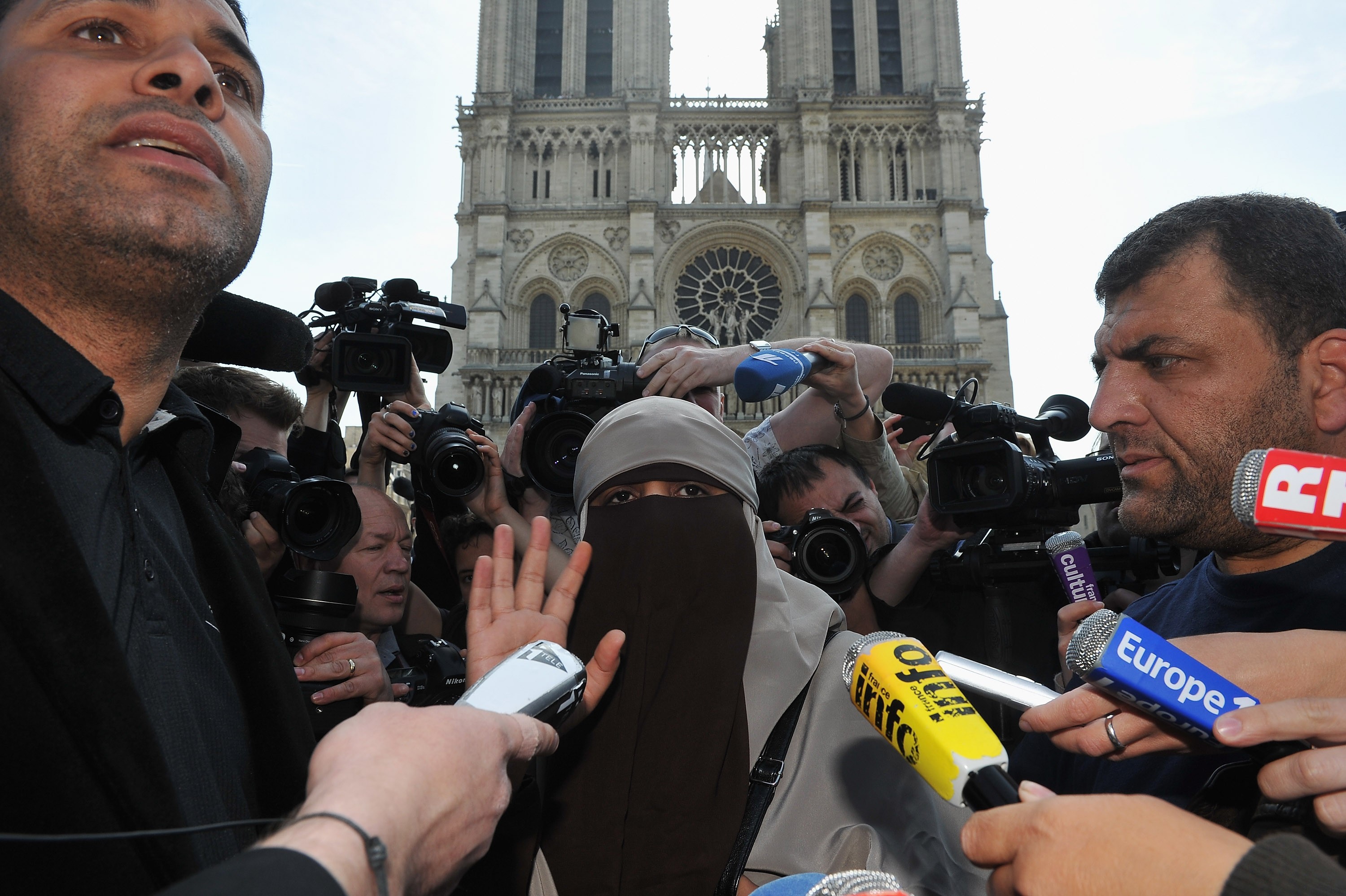 PARIS, FRANCE – APRIL 11: Kenza Drider addresses the media as she demonstrates against the ban of the ‘niqab’ or full-face veil in public places, on April 11, 2011 in Paris, France. (Photo by Pascal Le Segretain/Getty Images)

There are regional bans in place across Europe, including the Swiss canton of Ticano banning the face veil in 2015. A public vote on a national ban may be held across Switzerland in the coming year.

Several towns in Italy and its northern region of Lombard have banned the veil, as has the Spanish city of Barcelona, and Norway banned them in schools in 2017.

Germany lawmakers approved a partial ban in April 2017 which applies to public servants — such as election officials, military, and judicial staff — performing their duties. Half of the country’s 16 states have prohibited teachers from wearing headscarves, and conservative Bavaria went on to ban full-face veils in schools, polling stations, universities, and government offices in early 2017.

In the Netherlands in November 2016, MPs backed a partial ban where it would be illegal to cover your face in some public places, such as on public transport and in schools and hospitals. The Dutch senate is yet to approve the bill.

– Burqa Bans in Africa and the Middle East –

In West Africa, Cameroon (one-fifth Muslim population) and Chad (55 per cent Muslim) both banned the burqa on security grounds in 2015, following suicide bombings.

Christian-majority Gabon, which had not suffered any Islamist attacks, was inspired to enact the ban following what happened in Cameroon.

In the Middle East and North Africa, Morocco banned the manufacturing, marketing, and sale of the burqa in January 2017, and Syria banned the face veil in universities in 2010 to enforce its secular identity.

The Near-Eastern nation of Turkey has taken a hard Islamist turn under President Recep Tayyip Erdoğan, but after the fall of the Ottman Empire in 1922, founder of the Turkish Republic Mustafa Kemal Atatürk led the country onto a path of secularisation.

In the 1970s, the headscarf was banned in government offices, hospitals, universities, and schools, but the country’s mood has become more fundamentalist in recent years, with the ban being lifted in 2013.

A woman wearing a burqa walks past the Palace of Justice in The Hague on December 1, 2014. (Photo credit JERRY LAMPEN/AFP/Getty Images)

In Egypt in 1953, President Gamal Abdel Nassar laughed at a suggestion by the Muslim Brotherhood that the hijab should be mandatory.

Yet following the so-called Arab Spring in 2011 and the brief presidency of the Muslim Brotherhood’s Mohamed Moris, women complained that the Islamists had made the situation worse in Egypt, with women telling of being harassed on the street for not covering their hair.

Similarly, after the 1979 Islamic Revolution in Iran, the secular, modernising country regressed with laws enforcing strict social codes and clothing laws for women, including the enforcement of wearing the hijab.

In early 2018, a series of protests against the hijab led to several women being arrested because they uncovered their hair in public.