Hungarian Identitarian movement leader Abel Bodi was suspended from Facebook this week for sharing a Breitbart London article that reported on his detainment and deportation from the UK earlier this year.

Mr. Bodi, who leads the Hungarian branch of the Identitarian movement, told Breitbart London that he had been suspended from his personal Facebook account for the second time in a week for posting the article in question, which he had shared in April, and provided a screenshot showing Facebook claiming the post “violates our community principles”. 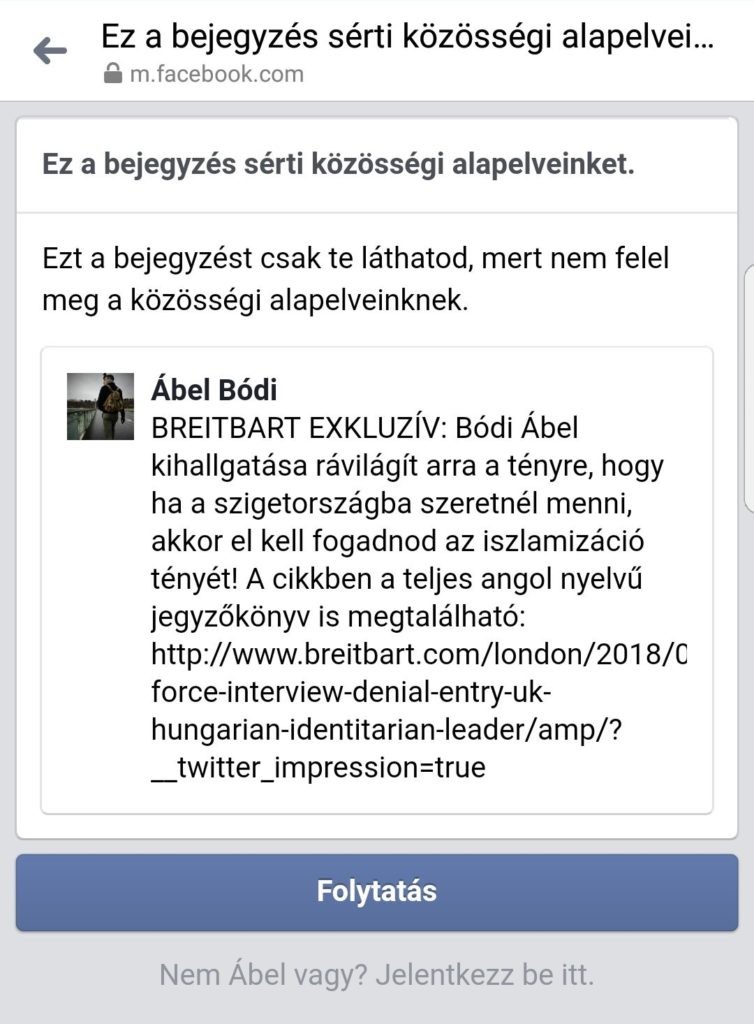 The article was an exclusive story in which Breitbart London obtained the documents from Mr. Bodi’s interview with the UK border force in April.

During the interview, Bodi was asked a range of questions by a border forces officer including why he was seeking to enter the UK and was even quizzed as to why he thought illegal migrants entering the UK were a threat.

The document Bodi was later given to justify his entry ban also noted his counter-Islamisation beliefs to be one of the causes for the ban leading some to speculate that acceptance of Islamisation is a requirement to enter the country.

Bodi, along with Austrian Identitarian movement co-leader Martin Sellner, were both detained over the same weekend as they had both been scheduled to speak at a conference held by the UK branch of the movement Generation Identity. The event took place without the pair but ended in violence after Antifa extremists were alerted to the private location of the event by far-left activist group HOPE not Hate.

Bodi’s suspension comes after a massive crackdown by the social media platform Instagram on Identitarian accounts, including Martin Sellner’s.

Twitter user @hnelke1973, real name Holger Nelke from Dusseldorf, took credit for the suspension of several Identitarian Instagram accounts last week writing: “Another one bites the dust… following my earlier report Instagram took down another account of the Identitäre Bewegung aka Generation Identity. Seems like they are finally getting it sorted. Martin Sellner and his racist bunch are removed left, right and center.”

Another one bites the dust… following my earlier report Instagram took down another account of the Identitäre Bewegung aka Generation Identity. Seems like they are finally getting it sorted. Martin Sellner and his racist bunch are removed left, right and center. #ChuffedToBits pic.twitter.com/Hvy88jBNWh

Bodi told Breitbart London that he assumed the social media suspension may be related to a planned protest against the arrest and imprisonment of former English Defence League leader turned citizen journalist Tommy Robinson who was sentenced to 13 months in jail late last month for breaching terms of a suspended sentence for contempt of court by filming outside of an ongoing trial in Leeds.

The protest would follow several other Identitarian protests against the imprisonment of Robinson that have already taken place outside of British embassies in Berlin and Vienna.