Three radical Islamic terrorists who beheaded two female backpackers in the Atlas Mountains in Morocco have been sentenced to death by firing squad.

Carpenters Youness Ouaziyad and Rachid Afatti and street merchant Abdessamad Ejjoud were sentenced on Thursday for the murders of Maren Ueland, 28, from Norway, and Louisa Vesterager Jespersen, 24, from Denmark.

A fourth man, Khaiali Abderahman, was sentenced to life imprisonment, while another 19 accomplices were give prison terms ranging from five to 30 years, reports Sky News.

Maren and Louisa, who were flatmates at Norway’s Bo University, had been backpacking, unguided, in the area to the south of Marrakesh when they were murdered whilst camping at the base of the range’s tallest mountain, Mount Toubkal, in December 2018.

An anti-terrorism court in Sale, near Rabat, had heard that the men had pledged allegiance to the Islamic State before the murders, while French media reported that Ejjoud had served a prison sentence in Morocco for trying to join Islamic State in Syria and had been released in 2015.

During the trial, Ejjoud, an underground imam believed to be the ringleader of the terror cell, had said: “We loved Islamic State and prayed to God for it.”

The Islamist also said that he had planned a number of terror attacks, including on churches and synagogues, but chose instead to kill the two Scandinavian women. The court heard that the men took four days to identify the women as their targets, choosing Maren and Louisa because other tourists were accompanied by guides. The three terrorists filmed the decapitations and posted them online. 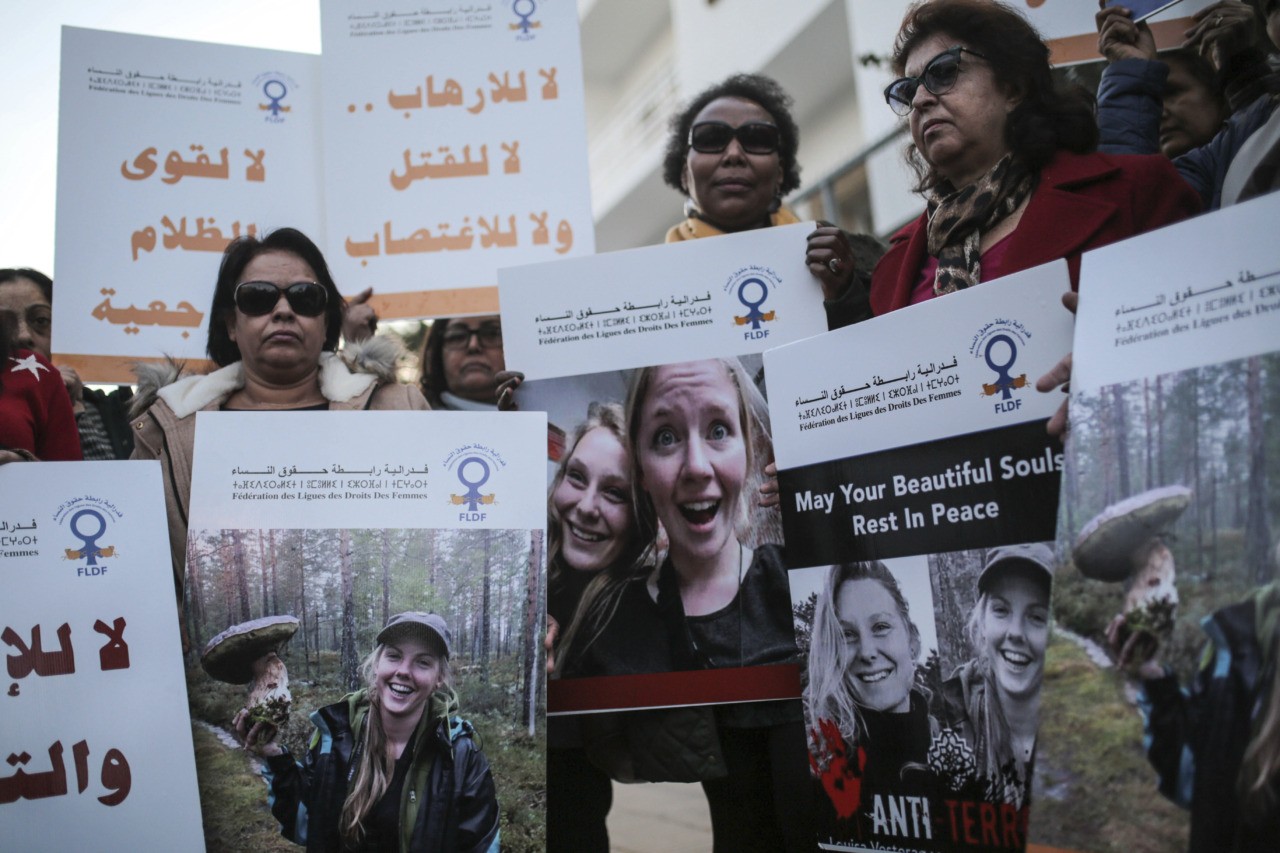 Moroccan women carry photos of 28-year-old Norwegian Maren Ueland and 24-year-old Danish Louisa Vesterager Jespersen, during a candlelight vigil outside the Danish embassy in Rabat for the two Scandinavian university students who were killed in a terrorist attack in a remote area of the Atlas Mountains, Morocco, Saturday, Dec. 22, 2018. Moroccans gathered Saturday in front of the Norwegian and Danish embassies in Rabat in a candlelight vigil to honour two Scandinavian university students killed in a terrorist attack in the Atlas Mountains. Banner in Arabic reads “No to terror, murder, rape”. (AP Photo/Mosa’ab Elshamy)

Their bodies were found on December 17th, and the post-mortems revealed 23 injuries to Louisa’s body and seven on Maren’s.  Authorities do not believe the murders were directed by Islamic State, and said that the ISIS supporters had not been in contact with any militants in warzones.

Prosecutors described Affati, 33, Ejjoud, 25, and Ouaziyad, 27, as “bloodthirsty monsters”, with prosecutor Khalid El Kerdoudi telling the jury: “We can’t be lenient toward these human beasts.”

Morocco has not executed a criminal since 1993, after the country introduced a moratorium on capital punishment that year.

The defence had called for leniency during the trial, alleging that there had been “mitigating circumstances on account of their precarious social conditions and psychological disequilibrium”, with their lawyer saying on Thursday that he would be appealing the death sentences.

This is not the first time Western tourists, or destinations popular with Western visitors, have been targetted by Islamist terrorists. In July 2018, Islamic State claimed responsibility for the murder of four touring cyclists in Tajikistan, who were killed when an extremist mowed them down with their car. The terrorists then jumped out of the vehicle and stabbed and shot the survivors. The victims had hailed from the United States, Switzerland, and the Netherlands.

The summer of 2017 also saw a number of fatalities at tourist hotspots. In June, al-Qaeda-linked gunmen killed five at a tourist resort in Mali; in July, an Egyptian man reportedly shouting that he wanted to kill foreigners fatally stabbed two tourists and wounded four others at a Red Sea resort; and in August, Islamist extremist gunmen killed 18 at a Turkish restaurant popular with tourists in Burkino Faso.

In June 2015, 38 people were killed when a terrorist opened fire at a popular resort in Tunisia, with Islamic State saying they were behind the attack. Of the fatalities, 30 were British, two were Irish, two German, one Belgian, one Portuguese, and one Russian.