The night’s incidents started at around 9:30 pm on Thursday when several fires were reported in a derelict building near Vallerey Square and other fires at an abandoned garage in the Devèze district of Béziers, broadcaster BFMTV reports.

Once police arrived on the scene, a group of people attacked them with firecrackers and rocks. But with the protection of the police, firefighters were able to get the first fires under control.

An hour later, at around 10:30 pm, a fire was reported at the Maurice Et Katia Krafft middle school. When police and firefighters arrived on the scene, they were again attacked by a group of up to 30 people armed with rocks, fireworks, and other projectiles. Police say the attackers had covered their faces to avoid identification.

After police reinforcements arrived, firefighters were able to tackle the blaze. A source told BMFTV that the main damage included “broken windows” and that “a fire was started in the gym and two adjoining rooms”.

However, more considerable damage was caused to the nearby Tamaris primary school, some three minutes’ walk away. “The Tamaris school was severely damaged by fire. Several rooms and classrooms are completely destroyed,” says the source. “The fumes spread in almost the entire establishment, resulting in all the classrooms becoming blackened from smoke.”

Between around 10:30 pm and 11:00 pm, police said that a gang of around 20 people wearing “Halloween-type masks” disturbed traffic at the Pierre Verdier roundabout in another part of the city.  The attackers deposited “a moped as well as garbage containers” on the road. They then “set [the garbage bins] on fire while throwing stones at vehicles as they passed by”, according to the source.

Calm only returned to the area at 12:30 am after police reinforcements arrived. No arrests were made during the night, though earlier on Thursday evening, police detained a 15-year-old male for throwing stones at officers near one of the schools that were later set on fire. One firefighter was injured during the night’s activities.

“In total, three cars, a moped and several garbage containers were burned in the night in different districts of Béziers,” the source told the broadcaster. 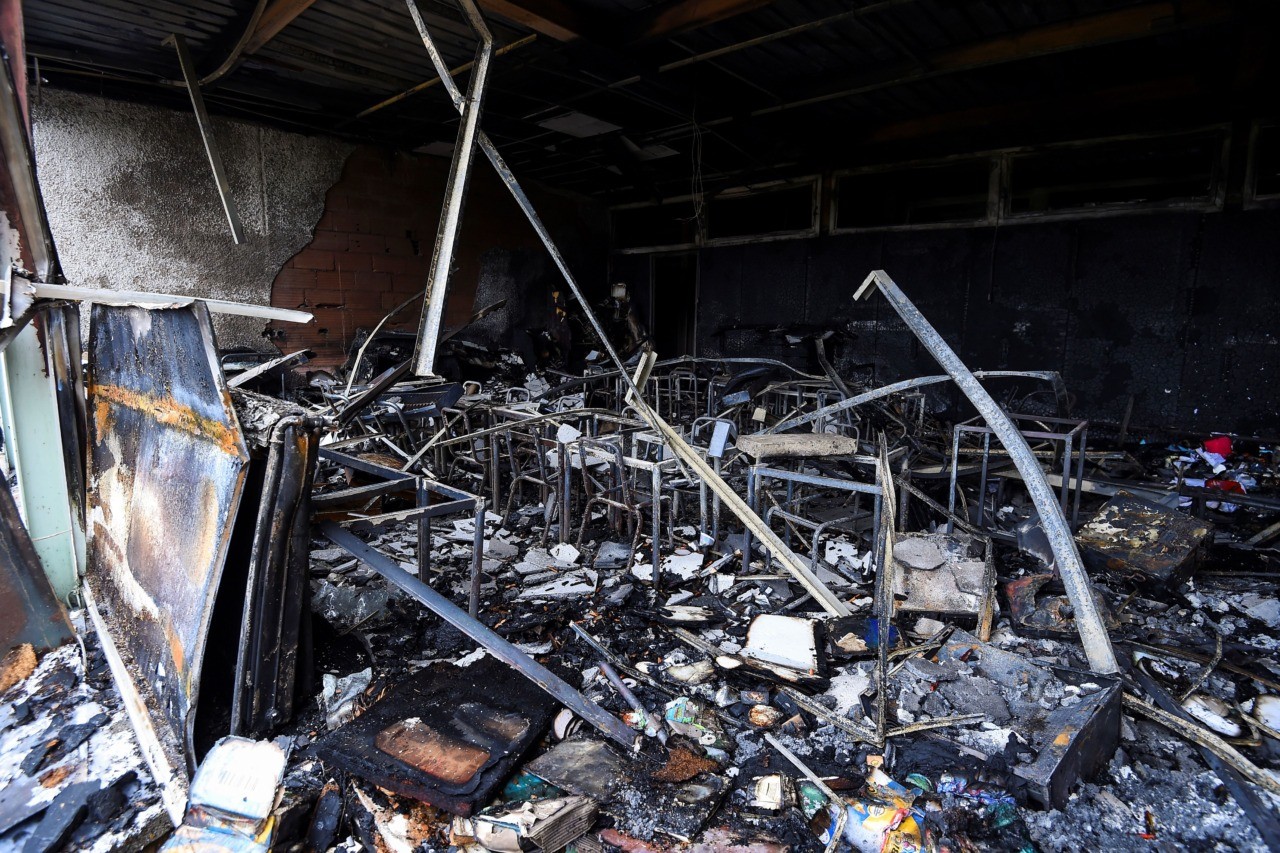 A picture taken on November 1, 2019, shows the damages at the Tamaris elementary school in Beziers, southern France, after a fire of criminal origin destroyed several classrooms overnight. (Photo by SYLVAIN THOMAS/AFP via Getty Images)

Robert Ménard, the firebrand mayor of Béziers, commented on the violence saying: “A minority rots the lives of people in the neighbourhood. We must punish them harshly and not just be satisfied with words.”

He also gave more details on the damage to the primary school, saying it would likely need to be rebuilt.

French Minister of National Education Jean-Michel Blanquer also gave a statement condemning the arson attack. Interior Minister Christoph Castaner said: “Arson of a school is an offence to the Republic. Along with Jean-Michel Blanquer, I condemn these unacceptable acts. They can not go unpunished: everything will be done so that their authors respond to justice.”

The incident is not the first time police and firefighters have had to deal with guerilla-like tactics employed by individuals in troubled areas of French cities. Last year, in the city of Mulhouse, a group of around 50 youths clashed with police for several hours, attacking officers with rocks and iron bars.