London Police forcibly shut down an anti-lockdown protest in Trafalgar Square on Saturday, using their batons to beat protesters as they tried to disperse the demonstration, which the police claimed violated the UK’s coronavirus regulations.

After two hours of peaceable assembly in which the protesters listened to speeches against the lockdown and chanted for freedom, police stormed into the crowds, pushing people to the ground and ultimately hitting some protesters over the head with batons.

In a Breitbart London exclusive video, women and small children were seen fleeing from the violent clashes that ensued. Women were heard screaming, and men were seen with blood pouring from their heads.

Protesters were heard shouting, “Stop hitting people,” and telling the officers that they have blood on their hands. 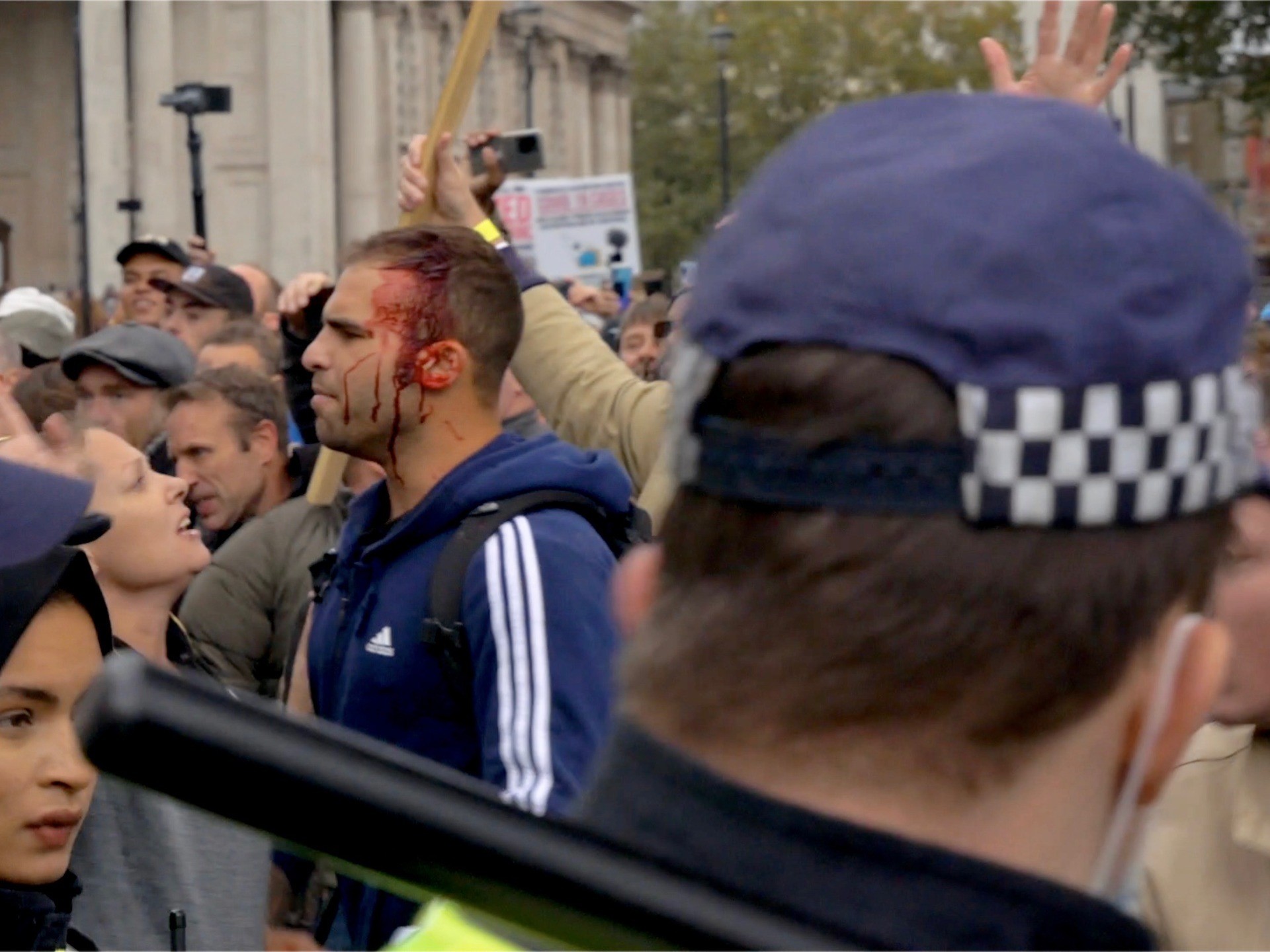 A man is seen with a bloody face after clashing with police at an anti-lockdown Protest in Trafalgar Square, London on September 26th, 2020. Kurt Zindulka, Breitbart News

A woman who was present as the police stormed the protest told Breitbart London: “My God, they just came through like a cohort of centuries. It was awful, and my friend saw them just knock a man to the ground, and he just went flying.”

“It was so shocking,” she said, “I’m quite saddened that our police behaved like that.”

The woman said that she was conflicted as she comes from a police family. She said that she was “absolutely disgusted by how they behaved” but noted that she believes many of the officers are just following orders and are concerned about keeping their jobs.

She lamented that she feels the United Kingdom is now similar to living under communist rule in East Germany, saying that the police tactics were “like the Stasi”.

In contrast to the heavy-handed tactics employed against the anti-lockdown demonstrations, the Metropolitan Police Service (MPS) appeared to have taken a much more hands-off approach during months of Black Lives Matter protests in the British capital, despite the force admitting that policing BLM and counter-protests had “contributed” to a rise in attacks on officers.

In a statement, the Metropolitan Police Service (MPS) said that 16 protesters were arrested during the demonstration in Trafalgar Square and the march in Hyde Park.

The MPS said that they were arrested on charges of breaching the coronavirus regulations, public order offences, violent disorder, and assaults on nine police officers.

The statement did not reveal how many protesters were injured by the police during the shutdown operation.

Sadiq Khan, June 6 on BLM protest: “I stand with you and share you anger & pain”

Sadiq Khan today on anti-lockdown protest: “ This is not acceptable… leave now”

Once agin, one rule for some… and another for others 🏼‍♂️ https://t.co/GHeE9OBTiy

The leader of the operation, Commander Ade Adelekan, said: “As the crowds began to swell in Trafalgar Square, it became impossible for people to maintain social distancing and keep each other safe. Likewise, there appeared to be no efforts by organisers to engage with crowds and keep those assembling safe from transmitting the virus.”

“This lack of action voided the risk assessment submitted by event organisers the night before. Therefore, today’s demonstration was no longer exempt from the coronavirus regulations. In the interest of public safety, officers then worked quickly to disperse crowds. I am grateful to those members of the demonstration who listened to officers and went home,” Commander Adelekan added.

Earlier this month, Prime Minister Boris Johnson announced that the government would be banning gatherings of more than six people, with protests, “if organised in compliance with COVID-19 Secure guidance”, being exempt.