In an exclusive interview with Breitbart London, Swedish journalist Jojje Olsson said that the threats he received from the Chinese embassy in Sweden will not deter him from working to expose the horrors committed by the communist regime in Beijing.

Olsson, who has been based in Taiwan for the past four years after previously living in Beijing for seven years and a year in Hong Kong, received an email from the Chinese embassy in his native Sweden on April 8th, which warned him that he will face “consequences” for his reporting. 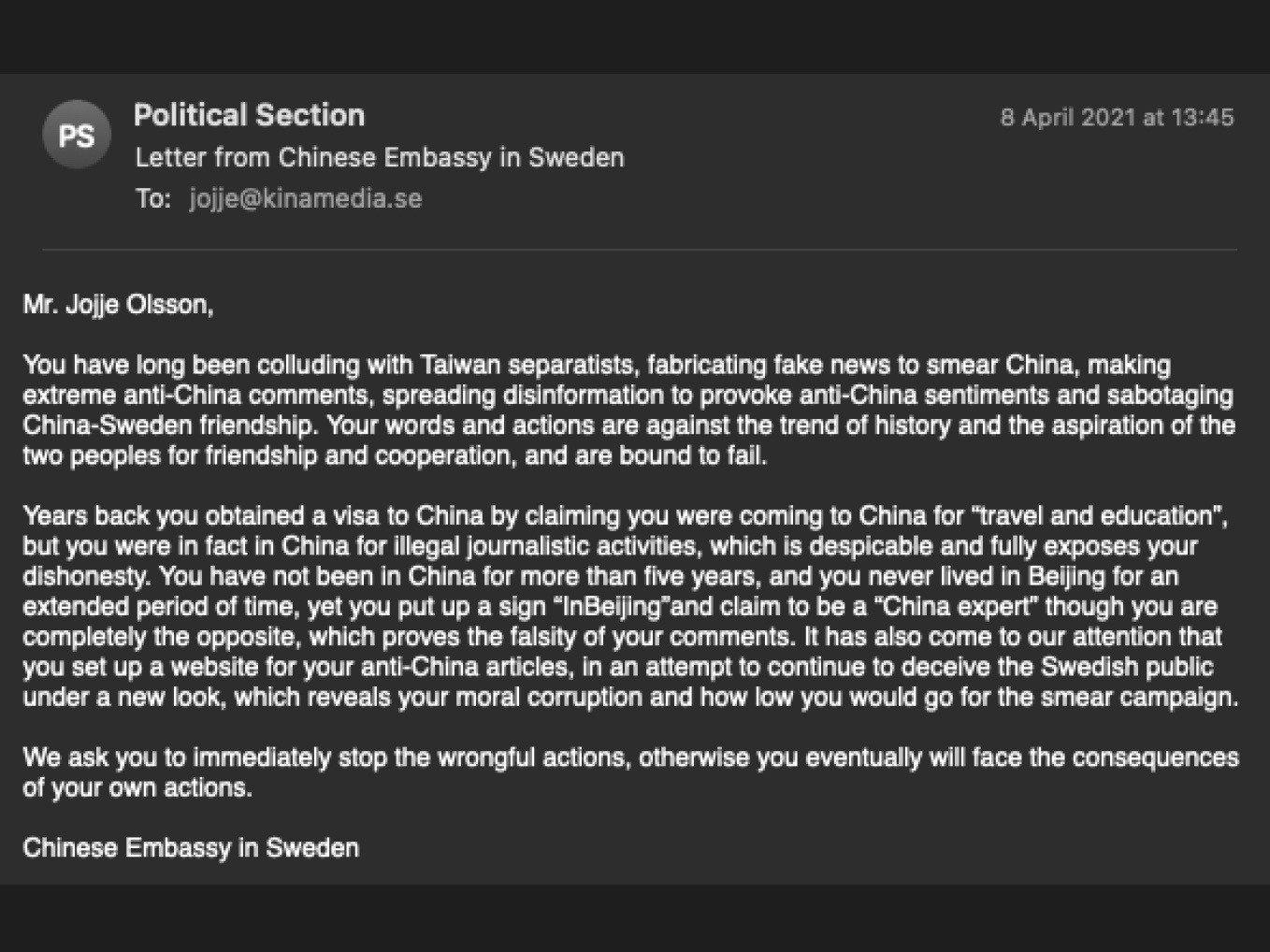 Screenshot of an email sent to Swedish journalist Jojje Olsson from the Chinese embassy in Sweden on April 8th, 2021. Credit: Jojje Olsson

Speaking to Breitbart London, Olsson said: “I have been targeted by the Chinese embassy multiple times, starting from the summer of 2017 when the embassy for the first time mentioned me by name on its website.”

Olsson said that he believes that it is “obvious” that the latest attacks from the CCP came as a result of his reporting on Xinjiang, which he said has “replaced Hong Kong as the most sensitive issue for the Chinese regime” and that reporting on the alleged genocidal treatment of the Uyghurs often draws reprisals from the Communist Party.

However, Mr Olsson struck a defiant tone, pronouncing that the threats from the Chinese embassy will not stop him reporting on sensitive issues for Beijing, saying that the incident “shows the importance to focus even more on the issues that create such a strong reaction from the regime.”

Olsson’s case and the threatening messages from the Chinese government have been reported on by his own Swedish newspaper, Expressen, who said they had approached the Chinese embassy to ask what “consequences” they had in mind for the journalist.

Mr Olsson told Breitbart London that while he is not worried for his physical safety in Taiwan he would not be surprised if the CCP launches cyberattacks and “smear campaigns” against him in order to damage the credibility of his reporting.

“The Chinese regime has excelled on those measures against journalists, NGOs, or even politicians that it deems ‘harmful’ to Beijing’s interest,” he explained.

The Swedish journalist did say, on the other hand, that he would “absolutely not feel safe to return to China, and after the new national security law, even Hong Kong is out of the question.”

Olsson said that he believes the reason for his blacklisting in China in 2016 came in response to his reporting on Swedish citizens Gui Minhai and Peter Dahlin, who were both detained by the communist regime.

In February, Mr Gui — a former Hong Kong bookseller who published books critical of CCP leaders — was sentenced to 10 years in prison after initially disappearing in 2015. Mr Dahlin, a Swedish human rights activist, was forced to give a Chinese state-media run “confession” in 2016 for allegedly stoking “opposition to the government”.

“Since this became big international news, the Chinese authorities went after Swedish journalists writing on the issue,” Olsson said.

While Mr Olsson said that he is “not in a position to judge” what response the Swedish government should take against the CCP for the embassy’s threats against him, he said that it “is clear that if the Swedish government wants the threats towards Swedish journalists and researchers to end, it is not enough to just repeatedly say that those threats are ‘unacceptable’, without putting any actions whatsoever behind the words.”