The people of Norway celebrated the end of coronavirus restrictions on Sunday after an abrupt announcement from the prime minister.

According to the Associated Press (AP) the celebrations in some of Norway’s biggest cities that police were deployed not to punish people for wearing masks but to quell the “dozens of disturbances and violent clashes” as people piled into the streets, bars, restaurants, and nightclubs.

Rowdy celebrations by hundreds of citizens across Norway started Saturday afternoon and lasted until the early hours of Sunday. Police said unrest was reported in several places, including in the southern city of Bergen and the central city of Trondheim, but the situation was the worst in Oslo.

Long lines were seen outside Oslo’s nightclubs, bars and restaurants late Saturday and police registered at least 50 fights and disturbances during the night. Neither vaccination status certificates nor negative test results are required to enter such venues in Norway.

Among other incidents, Norwegian media reported that police received an alert about a man carrying a machete on a bus in Oslo and people fainting while waiting to get into pubs in Trondheim.

The celebrations occurred after outgoing Prime Minister Erna Solberg abruptly announced on Friday that most coronavirus restrictions would be coming to a halt on Saturday, prompting scores of euphoric people to take to the streets.

“It has been 561 days since we introduced the toughest measures in Norway in peacetime,” Solberg said on Friday at a news conference. “Now the time has come to return to a normal daily life.”

Solberg told critics of his sudden move he had the backing of Norwegian health experts.

“We shall not have strict (coronavirus) measures unless they are professionally justified. People must be allowed to live as they wish,” Solberg told reporters Saturday. 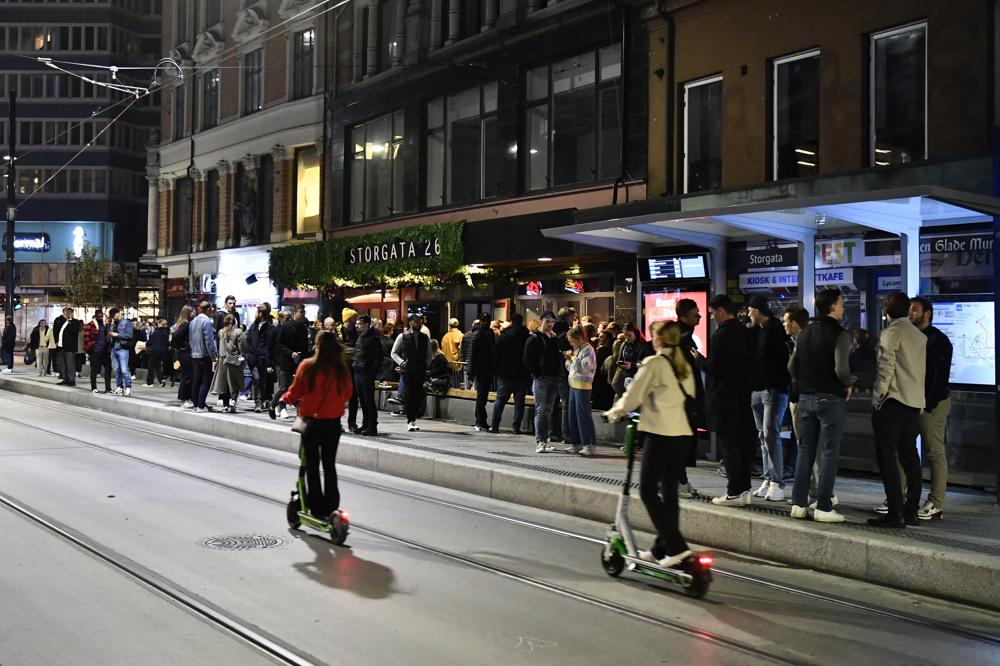 People out on the streets to celebrate the end of the COVID-19 restrictions, in Oslo, Saturday, Sept. 25, 2021. Police in Norway on Sunday reported dozens of disturbances and violent clashes including mass brawls in the Nordic country’s big cities after streets, bars, restaurants and nightclubs were filled with people celebrating the end of COVID-19 restrictions. (Naina Helen Jama/NTB via AP)

Johan Hoeeg Haanes, a nightclub manager in Oslo, told the Norwegian paper VG that people should have been given further notice to prepare.

“That’s exactly what I predicted would happen,” said Haanes. “It was a life-threatening situation in the city because they (government) didn’t give us at least a few days advance notice. This was a dangerous situation, as police said all places were packed.”

Sunday-Tuesday just in: +1.51M doses reported administered over Saturday's total, including 681K newly vaccinated and 105K additional doses. As usual, lower reporting over the holiday weekend. Just hit 75% of adults with at least one dose!