Speaking after a day of swirling controversy over an allegedly lockdown-busting Christmas party at Downing Street, UK PM Boris Johnson has introduced vaccine passports for England and has extended a number of other measures, potentially pointing to an imperilled Christmas for the second year in a row.

Responding to a question from a member of the public on possible mandatory vaccinations, Prime Minister Johnson said that while he had said early on in the pandemic that he “didn’t want us to have a society and a culture where we forced people to get vaccinated”, that he believed “there is going to come a point” where “we are going to have to have a conversation about ways in which we deal with this pandemic”.

The prime minister continued: “I want to be absolutely clear with you: I don’t believe we can keep going indefinitely with non-pharmaceutical interventions, I mean restrictions on people’s way of life just because a substantial proportion of the population still sadly has not got vaccinated.

“And I think we’ll need to have a national conversation about the way forward. And the other things that we can do to protect those who are hard to reach, who haven’t got vaccinated for one reason or another.”

“But that is a stage we will come to, if and when, we establish that the booster is effective against Omicron and the booster is capable of holding Omicron, getting us back into that equilibrium the double jabs got us into with Delta.

“So it’s at that moment we will have to talk seriously about moving on from thinking about further NPIs [non-pharmaceutical interventions],” Mr Johnson said.

Mr Johnson said the fact that Omnicron was spreading considerably faster than the previously well known Delta without the British government understanding whether it was more dangerous or not, revealing there were now 568 confirmed cases in the United Kingdom.

Calling the growth of Omnicron “exponential”, the Prime Minister said that could mean “a big increase of hospitalisations”, hence today’s fresh crackdown. 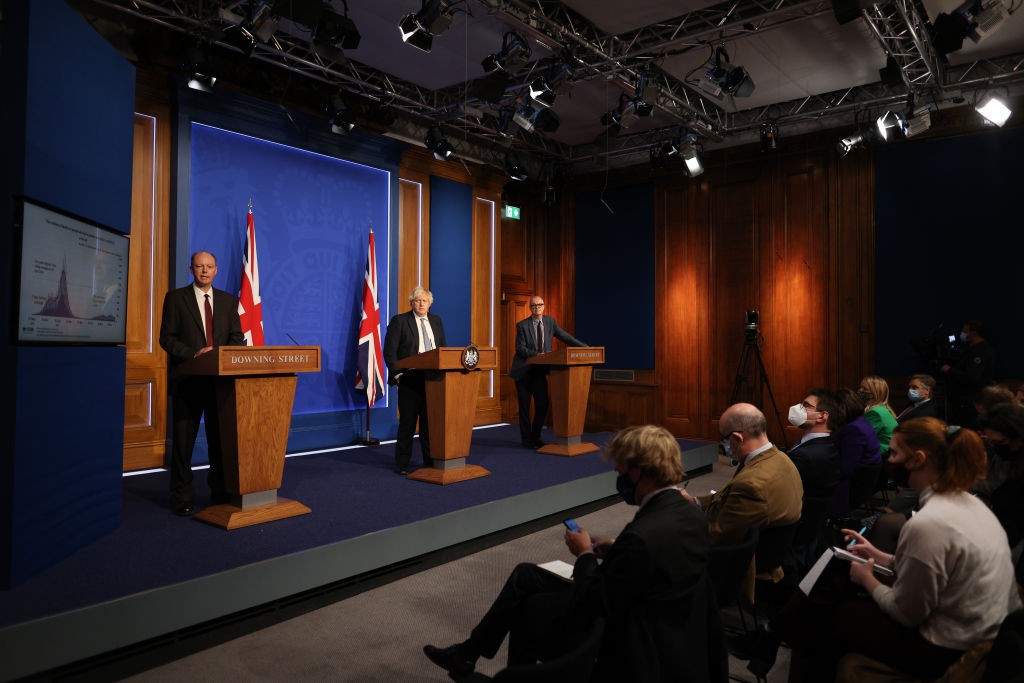 The government is once again asking the public to work from home “if you can” and will extend mask mandates to new indoors spaces including theatres and cinemas, although the Prime Minister said there would be exemptions for “eating” and “singing”.

In a major shakeup, England is to be subjected to mandatory vaccine status passports for some venues. Valid if the individual has two injections — although the Prime Minister made clear that would likely soon change to three — or with a recent negative test, the passes would apply to high capacity venues like nightclubs.

Johnson said they would include indoor venues with an unseated capacity of 500, outdoor unseated of 4,000, and venues of any type with a capacity of more than 10,000.

The Prime Minister told the nation: “…since I last spoke to you it has beocme increasingly clear that Omnicron is increasing much faster than the previous Delta variant and it is spreading rapidly all throughout the world…. it’s now the proportionate and responsible thing to move to ‘plan B’ in England… so we slow the spread of the virus, buy ourselves the time to get more boosters into arms and especially in the older and more vulnerable people.”