TEL AVIV – Mahmoud Abbas’ Fatah movement celebrated the 51st anniversary of its founding with an image of a knife, a bullet, and a rifle with the accompanying slogan, “Revolution Until Victory” and the declarations, “Half a century of sowing terror in the eyes of the sons of Zion” and “With blood we will redeem the homeland and saturate its ground,” Palestinian Media Watch (PMW) reported.

The image (pictured above) appeared on the website of Fatah’s Information and Culture Commission in Lebanon on December 12.

Fatah’s official Facebook page praised the results of its terror attacks as the “sowing of terror” among Israelis alongside a picture of a masked Fatah terrorist.

Another post from December 26, this time with a masked Fatah terrorist with a rifle, vowed to “redeem the homeland with blood.”

“We march, we are not afraid of the fire and we do not fear death,” the post stated. “With blood we will redeem the homeland and saturate its ground. The anniversary is approaching.” 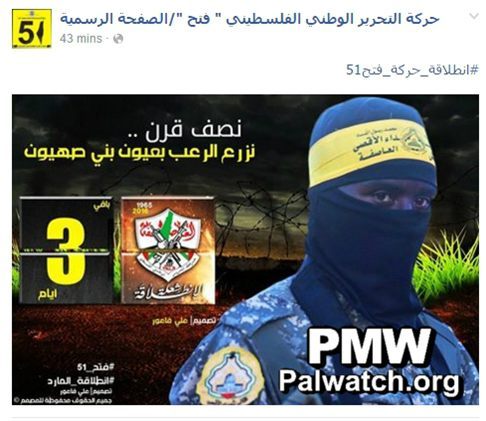 Fatah has repeatedly emphasized its support for violence against Israelis in general and stabbings in particular.

Another image, tweeted by Fatah’s Twitter account, shows a rifle and highlights the outbreak of the “Palestinian rebellion” on January 1, 1965, when Fatah carried out its first terror attack against Israel with an attempt to bomb Israel’s National Water Carrier.