The Iran-backed Hezbollah terrorist group’s flag will be flown through the streets of London on Sunday during the annual Al-Quds march after last-minute attempts to prevent the inflammatory act failed.

More than 13,000 people have signed a parliamentary petition calling for the Lebanese Shi’a group to be fully banned under UK law, an effort to ensure it falls under the same restrictions imposed on the Hezbollah military wing. The petition points out:

Britain proscribes Hizballah’s “military wing” but, at the behest of the Foreign Office, not its “political wing”. Hizballah mocks the distinction. For example in 2012 its Deputy Secretary-General said: “We don’t have a military wing and a political one”.

Hizballah seeks the extermination of Jews. For example in 2004 its Secretary-General said: “If Jews all gather in Israel, it will save us the trouble of going after them worldwide. It has been responsible for terrorist attacks murdering Jews from Buenas Aires to Burgas, and has even been blamed for two bombings targeting Jews in London in 1994.

London Mayor Sadiq Khan said he wrote to Sajid Javid, the new Home Secretary, calling for the flags which bear a dagger and an assault rifle to be banned entirely, but this would not be proceeding. Asked if he would ban the march altogether, Mr. Khan said:  “I think it’s difficult. I haven’t got the powers to do so – it’s a decision for the Home Secretary to make.

“We’ve got to be a bit careful about banning marches.” 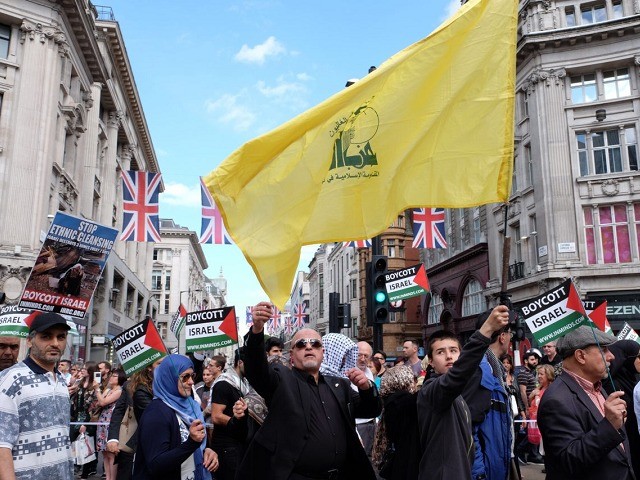 Al-Quds Day marchers take over the streets of London in 2017 . (Rachel Megawhat/Breitbart News).

Al-Quds Day began in 1979, driven by the late Iranian leader Ayatollah Khomeini to call for the State of Israel to be destroyed.

Organisers claim it “unites for the freedom of the oppressed in Palestine and beyond” and it is co-run by the Islamic Human Rights Commission.

Hezbollah is an illegal, anti-Semitic terrorist organisation, designated as a terror organization in its entirety by the Arab League, Bahrain, Canada, France, Israel, Australia, the Netherlands, and the United States. But the European Union, as well as the United Kingdom, maintain a difference between the group’s military and political wings, seeking only to proscribe the former.

Questions have been asked as to why the gov. don’t just proscribe the whole of Hezbollah as a terrorist organization thus ensuring their flag will not be seen on the streets of London. So here is @AlistairBurtUK explaining and no, I still have absolutely no idea!@JournoStephen pic.twitter.com/vuR5221ktg

Metropolitan Police Commander Jane Conners says both she and Commissioner Cressida Dick “share concerns” that the raising of the anti-Israel Hezbollah flag on London’s streets “may be construed as belonging to a terrorist organisation.”

But Conners adds: “Purely holding a flag does not necessarily incite religious or racial hatred. It is the words or actions of the person holding the flag that can cause incitement.”

Organizers of the march have released this video as a prelude to Sunday’s events: