TEL AVIV – The deputy commander of Iran’s Revolutionary Guards (IRGC) boasted recently that the “Islamic army in Syria” was awaiting orders to “eradicate the evil regime” of Israel and Iranian proxy terror group Hezbollah has 100,000 missiles aimed at the Jewish state.

“We are creating might in Lebanon because we want to fight our enemy from there with all our strength,” Hossein Salami said in an Al-Quds day speech translated this week by the Middle East Media Research Institute (MEMRI). “Hezbollah today has tremendous might on the ground that can on its own break the Zionist regime. The Zionist regime has no strategic-defensive depth.” 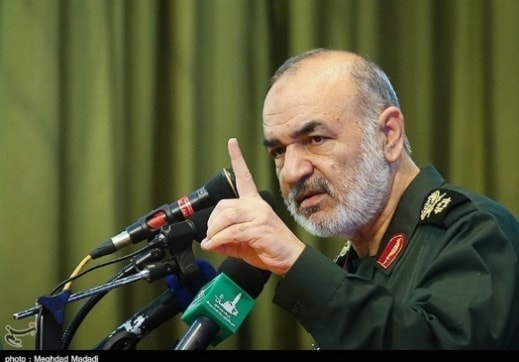 “Today an international Islamic army has been formed in Syria, and the voices of the Muslims are heard near the Golan,” he said. “Orders are awaited, so that … the eradication of the evil regime [Israel] will land and the life of this regime will be ended for good. The life of the Zionist regime was never in danger as it is now.”

Salami added that “the Zionist regime constitutes a threat … to the entire Islamic world. That is the philosophy of the establishment of this regime.”

He praised Ayatollah Ruhollah Khomeini, who “transformed the heart of Iran” with the 1979 Iranian revolution and his vision of a world without Israel.

Khomeini “spread the rationale of eradicating Israel as a new notion in the world’s political discourse,” Salami said. “Since then, the Zionist regime is fearful, delusional, and worried.”

Salami said Israel was to blame for all the troubles of the Muslim world.

“All the problems of the Islamic world stem from the existence of the false, counterfeit, historically rootless, and identity-less regime named Israel,” he said.

Israel has thwarted several possible Iranian missile attacks from Syria over the past few months. In February, an explosives-laded Iranian drone infiltrated Israeli airspace before being shot down. Israel retaliated by hitting the T-4 army base in Syria, killing at least seven members of the IRGC.

In May, the IRGC’s elite al-Quds Force launched 32 rockets at Israeli targets near the border. Four of them were shot down and the rest fell short of Israeli territory.

In response Israel destroyed dozens of Iranian targets in Syria in what was viewed as a military success.

In his speech, however, Salami said Iran succeeded in silencing Israel with the rockets.

“When the Zionists bombed the T-4 base in Syria and killed some young men, they thought that they would get no reaction. They thought that America’s and England’s support could frighten the resistance front. They thought that no one would respond,” Salami said. “But the response came in the Golan, and dozens of missiles were fired, along with the message ‘If you respond, we will flatten the heart of Tel Aviv into dust.’ They were silent, and did nothing further.”