Rep. Duncan Hunter (R-CA) served in the U.S. Marine Corps, completing two tours in Iraq and one in Afghanistan.

Now, however, he says he is fighting a “three-pronged war” — against his Democratic opponent, against the “liberals in the Department of Justice,” and against “the liberal media in San Diego” who are determined to see him ousted.

But Hunter has a battle plan: he is staying on message. His focus on Thursday was border security, with a caravan of thousands of migrants making their way northward through Mexico, and the U.S. military deployed to meet them.

At a press conference atop an hill overlooking the border, Hunter unveiled a new idea, which he shared in a letter to President Donald Trump: use military engineers to build the “foundational road upon which the wall will be built.”

As he explained to the president, the military already builds roads all over the world. The genius of the plan is that the money is already there.

“By utilizing active and reserve military assets, for which funding already exists and whose deployment you have already suggested to address the armies of migrants moving to infiltrate our nation, you will save massive amounts of taxpayer dollars as well as precious time,” Duncan wrote to Trump Thursday.

In an exclusive interview with Breitbart News, Hunter explained further.

“The reality is — people say this, and they are right to an extent — if you build a 50-foot wall, you can get a 60-foot ladder. You can use a plasma cutter and cut through anything. It’s the high-speed road that allows agents to react, that is the enabler for the entire border wall system.”

He noted that U.S. military engineers already train for road-building at sites in other parts of the country. “They’re practicing everywhere in the U.S., just not on the border — just do it there now,” Hunter argued. Using the military to build the wall could cut the wall’s current $25 billion price tag in half, he estimates. 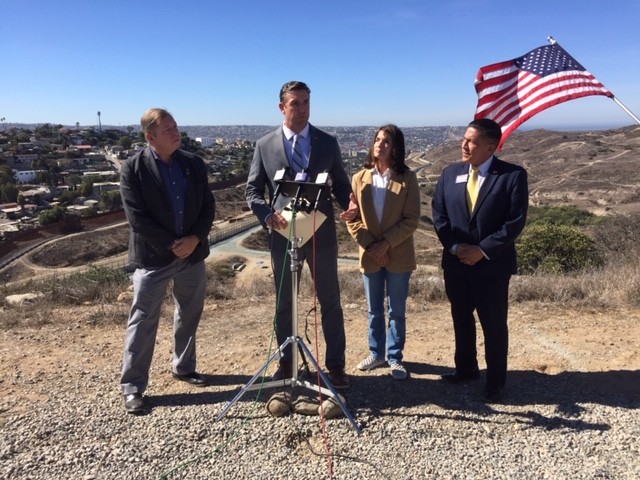 The wall, he said, will also need a road for maintenance purposes, since it will likely use electronic sensors to enable the U.S. Border Patrol to monitor what is happening at any point along the boundary. He pointed to the high-tech systems that Israel uses in its security barrier in the West Bank to keep terrorists out of the country. “We can absolutely learn more from Israel” about building the wall, he argued.

Hunter added that the U.S. faces many of the same risks Israel does, even though “the consequences in Israel, because of the hostility that surrounds them, are more pronounced because they’re so small and it only takes one or two things to happen to make it a really huge deal.” The crime committed by illegal aliens is as dangerous as terrorism, he argues; it is just more dispersed.

The example of Israel is relevant to the race for the 50th congressional district, which is tighter than it has ever been. Hunter has led his challenger, Democrat Ammar Campa-Najjar, in every poll — but the gap has narrowed.

Campa-Najjar, a Palestinian-Mexican “progressive” millennial who backs “Medicare for All” and other far-left policies, was a long-shot candidate until federal prosecutors indicted Hunter and his wife on charges of mis-using campaign funds in August.

Hunter considers the prosecution a political hit, not unlike the Department of Justice’s attempt to eavesdrop on Trump campaign associates in the 2016 race. “They want me out of Congress,” he said Thursday.

He notes that two of the prosecutors attended a fundraiser for Hillary Clinton in 2015, posing for photos with her. They had information about his campaign expenditures for years, he says, but only indicted him after the primary election and before the general election, when it was too late for him to step aside. (California does not allow a political party to substitute another candidate after the primary election.) He says he expects to prevail in court.

In the meantime, he told Breitbart News, “The DOJ handed Ammar his campaign slogans and literature on a silver platter — on purpose.”

In response, Hunter has drawn attention to Campa-Najjar’s unusual family background. He is the grandson of Muhammad Youssef al-Najjar, a Palestinian terrorist who was involved in the massacre of eleven Israeli athletes at the 1972 Olympic Games in Munich, Germany.

“Abu Youssef,” as he was also known, was the deputy to the late Yasser Arafat, the leader of the terrorist Palestine Liberation Organization (PLO), and co-founded its political party, Fatah, which still runs the Palestinian Authority.

Though Campa-Najjar denounced his grandfather’s terrorism earlier this year, he called him a “legend” and a “public servant” in a 2015 Instagram post, and his father, a former Palestinian official, still lionizes Abu Youssef as a “martyr.” (His father also recently referred to the Israeli commandos who killed his father in 1973, including future prime minister Ehud Barak, as “dogs.”)

Perhaps because of those historical associations, which emerged during the primary election, Campa-Najjar changed his legal name after the primary from “Ammar Yasser Najjar” to “Ammar Joseph Campa-Najjar.” He says he has always gone by the latter, except for much of the campaign he has referred to himself as “Ammar Campa.” 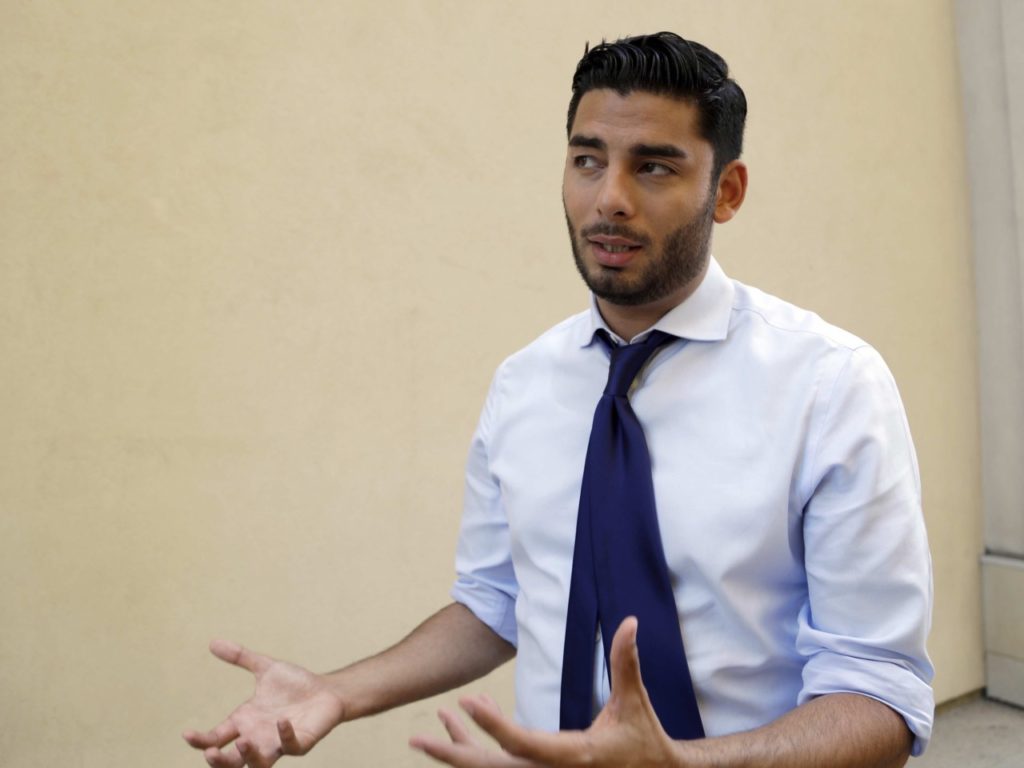 Last year, Campa-Najjar received a campaign donation from a Palestinian ambassador, which he refuses to return. Campa-Najjar has also taken tens of thousands of dollars from the Council on American-Islamic Relations (CAIR), and his campaign also donated money to CAIR.*

Hunter cites these facts to argue that Campa-Najjar is a “security risk” — a claim that provoked an outcry in the media, which accuses Hunter of racism and Islamophobia. But “it’s all factual,” he told Breitbart News.

He half-expected Campa-Najjar to crash the press conference, as he did recently when Hunter’s father held his own conference to lay out the case against the Democrat. But, he muses, that would have backfired. “He’s open borders,” Hunter said. “That’s a bad backdrop for him politically. Imagine talking about the wall — and him saying, ‘I’m not for that.’”

Hunter is not doing his own polling, and he is saving money on overhead by not opening campaign offices. Instead, he said, “We’re spending every resource that we have getting the word out” on Campa-Najjar.

Thus far, Hunter’s strategy seems to be working — though it is still anyone’s guess what will happen on Election Day.

In addition to border issues, Hunter also stresses that the Trump economy has been outstanding for his district. He noted that the average family in the district is saving thousands of dollars per year because of the Republicans’ tax cuts. Moreover, he said, there was an average real increase in annual salaries of $7,000.

“A lot of people do defense work. People are doing construction. People are relatively happy,” he said.

On health care, which is a major theme for Democrats in the closing weeks, he says that claims Republicans want to remove coverage for pre-existing conditions are “baloney.”

“The last health care plan we passed had pre-existing conditions in it,” he said. He laments the fact that the Senate failed to pass the House bill, but is hopeful a solution can be found in the next Congress.

Hunter could not predict whether Republicans would still control all of Capitol Hill. But he credits Trump for the fact that the race for the House is as close as it is.

“If Republicans hold the house, it’s not about the individual [candidates]. It’s about President Trump. If we win, or barely lose, it would have been worse without a President Trump.

“I think people that were trump supporters — they like what he’s doing. And the last thing he hasn’t done, that is not his fault, is building the border wall. He’s got a chance to do it … and he could do it for free,” he said, coming back to his plan.

As for Hunter’s own chances, election night? “I expect to win,” he said.

* In 2007-8, CAIR was named an unindicted co-conspirator in the terror financing trial of the Holy Land Foundation for Relief and Development. That case, in turn, led the FBI to discontinue its work with the organization. In 2009, a federal judge ruled that the government “produced ample evidence to establish” the ties of CAIR with Hamas, the Palestinian terror organization . The United Arab Emirates labeled CAIR a terrorist organization in 2014 (a decision that the Obama administration opposed).