Below is an excerpt from ABC News Senior White House correspondent Jake Tapper’s just-released, “The Outpost: An Untold Story of American Valor,” one of those harrowing, inspiring war stories so fantastic, it can only be true.

Early one morning in October of 2009, 53 American troops stationed at Outpost Keating — a base plopped in the middle of the Afghan nowhere and situated at a strategic disadvantage not to be believed — are attacked by 400 Taliban fighters. Thanks to extraordinary heroism, 45 manage to survive, but eight die due to the kind of military blunders that just break your heart.

From what I’ve read thus far, “The Outpost” is a remarkable feat of investigative journalism and storytelling. If you’ve seen the documentary “Restrepo,” you’ll recognize the vibe, but Tapper digs much, much deeper into who these men are and the hows and why of their situation. The detail delivers the context, and when it comes to investigative journalism, context is absolutely everything. I’ll talk more about this early next week in my interview with the author.

Best of all, without sugarcoating anything, Tapper’s admiration for the American military shines through. While many mistakes were made at almost every level, the author never allows that to manifest into the kind of glib cynicism that so often passes for journalism these days.

Enjoy the excerpt (here’s the book’s website should you want more), it’s the opening of “The Outpost” that sets the story up well. Below that I’ve linked Tapper’s recent interviews with Sean Hannity and Hugh Hewitt.

“The Outpost: An Untold Story of American Valor” — Written by Jake Tapper

At Jalalabad Airfield, in eastern Afghanistan in the summer of 2006, a young intelligence analyst named Jacob Whittaker tried with great difficulty to understand exactly what he was hearing.

The 10th Mountain Division of the United States Army wanted to do what? 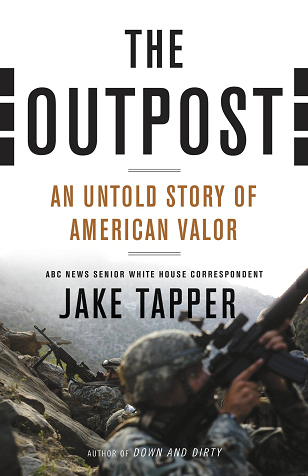 Whittaker had to choose his words carefully. He was just a low-ranking “specialist” with the Idaho National Guard, a very low man on a very tall totem pole. A round-faced twenty-six-year-old, Whittaker had simple tastes — Boise State football, comic books — and a reputation for mulishness belied by his innocent appearance.

Whittaker stared at his superior officer, Second Lieutenant Ryan Lockner, who was running this briefing for him and Sergeant Aaron Ives. Lockner headed intelligence for Task Force Talon, the Army’s aviation component at Jalalabad Airfield, in Nangarhar Province, adjacent to the Pakistan border. Military leaders considered this area, officially designated

Regional Command East, the most dangerous part of an increasingly dangerous country.

Lockner had an assignment. Soldiers from the 10th Mountain — a light infantry division designed for quick deployment and fighting in harsh conditions — had recently come to this hot corner of Afghanistan and would soon be spreading throughout the region, setting up outposts and bases. More specifically, they would be establishing a camp in Nuristan Province.

The members of the intelligence team led by Lockner didn’t know much about Nuristan, as U.S. forces had generally been focusing their efforts on Kunar Province, which had become a haven for Taliban insurgents and foreign fighters sneaking in from Pakistan to oppose the American “infidels.” During one operation in Kunar the previous summer, in 2005, nineteen U.S. troops — Special Forces — had been killed by such insurgents, and since then, the United States had increased its presence there. Helicopters flying in and out of Kunar Province were fired upon at least twice a week, every week, with small arms and/or rocket-propelled grenades (RPGs).

Nuristan was farther north, a province so mythically untamed that one of the greatest writers of the English language, Rudyard Kipling, had chosen it as the setting for his 1888 novella “The Man Who Would Be King.” One of Kipling’s British adventurers, Daniel Dravot, describes Nuristan as a place where “no one has gone…and they fight, and in any place where they fight a man who knows how to drill men can always be a King.” “You’ll be cut to pieces before you’re fifty miles across the Border,” warns Kipling’s narrator. “The people are utter brutes, and even if you reached them you couldn’t do anything.”

The region’s previous brigade commander, Colonel Pat Donahue, hadn’t thought Nuristan had much strategic value, so conventional forces hadn’t been posted there, and no one had troubled to find out much about the native people, the Nuristanis, a distinct and outlying ethnic group within Afghanistan. In a departure from his predecessor’s policy, Donahue’s replacement — Colonel John “Mick” Nicholson, the commander of the 10th Mountain Division’s 3rd Brigade, known as the Spartan Brigade — ordered the establishment of small outposts throughout the area in the summer of 2006, in an attempt not only to stop the Taliban fighters who were streaming in from Pakistan, often with bushels of weapons, but also to win over the locals, who were predisposed to a suspicion of outsiders.

Lockner had just returned from Forward Operating Base Naray, in Kunar Province, where he’d met with officers of the 10th Mountain Division’s 3rd Squadron, 71st Cavalry Regiment, or “3‑71 Cav.” They’d told him of their plan to set up an outpost in the Kamdesh District of Nuristan Province, for which he would be in charge of identifying suitable helicopter landing zones. The new base would sit adjacent to the Nuristan hamlet of Urmul. A small settlement missing from most maps, Urmul was home to fewer than forty families of Nuristanis, or roughly two hundred people, who lived in houses made of wood and rock and mud sealant. The residents were primarily subsistence farmers trying to eke out a living through both crops and livestock, but the U.S. Army knew little more than that about them. Coalition forces likewise had next to no intelligence about the enemy in Nuristan — its numbers, its location, its intentions, or, most important, its capabilities — which was one of the reasons the brass was pushing to build a base there. This was the essential difficulty of the task at hand: the higher-ups in the U.S. Army needed to know about the enemy in this unexplored province, so in order to learn as much as they could, they were going to stick a small group of troops in its midst. For all Lockner knew when he flew over Urmul to reconnoiter, the hamlet might have been Osama bin Laden’s secret compound.

Here’s the transcript from Jake Tapper’s terrific interview with Hugh Hewitt. You can click here to see the Hannity segment.