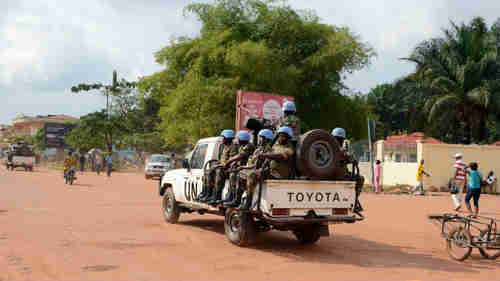 UN peacekeepers on patrol in Bangui in December 2014 (AFP)

Bangui, the capital city of Central African Republic (CAR), is experiencing its worst violence in almost two years. The violence was triggered on Saturday when the body of a Muslim motorbike taxi driver was found outside a mosque in a majority Muslim neighborhood. Dozens were killed in clashes between Muslim ex-Seleka militias fighting Christian anti-Balaka militias. An estimated 40,000 people were forced to flee their homes.

On Monday, members of the Christian anti-Balaka militias attacked the prison on Monday, freeing hundreds of soldiers and militiamen. Buildings have been looted or destroyed, and shops and businesses were forced to close.

United Nations peacekeepers fired warning shots in the air to disperse thousands of Christian protesters calling for the rearming of CAR’s national army. The U.N. has yet to rearm the military after many officers were linked to the anti-balaka Christian militia that carried out brutal attacks against Muslims.

Bangui was calmer on Wednesday, though the local Red Cross were quoted as saying it was still too dangerous on Bangui’s streets to pick up bodies.

According to UN spokesman Leo Hobbs:

We fear that the violence we’re seeing in Bangui is a return to the dark days of late 2013 and 2014, when thousands were killed and tens of thousands had to flee their homes.

CAR is a huge country, geographically, and although violence in Bangui makes all the headlines, there is continuing violence between Christians and Muslims across the country. A kind of chilling symbol of the level of violence in these clashes is that, as we reported in March, almost every one of the 436 mosques in CAR have been destroyed.

Much of the violence outside of Bangui is simply not being documented, according to Lewis Mudge of Human Rights Watch, when he was interviewed on al-Jazeera (my transcription):

Thousands of French and African Union peacekeeping forces have succeeded in bringing the fighting under control in Bangui, but the atrocities have spread north and east to villages far beyond the grasp of the peacekeeping troops.

As I have explained in the past, CAR’s last generational crisis war was the 1928-1931 Kongo-Wara Rebellion (“War of the Hoe Handle”), which was a very long time ago, putting CAR today deep into a generational Crisis era, where a new crisis war is increasingly likely.

By bringing the violence in Bangui under control for a while, the UN peacekeepers have removed CAR from the headlines, and given the impression that the war was almost over. But in fact, this war is far out of the control of the peacekeepers. As I have said repeatedly, whether it is in the headlines or not, this is a generational crisis war, and it will not end until it has run its course. And that will not happen until it reaches some kind of horrific, explosive climax which, right now, is nowhere in sight. BBC and Reuters and Bloomberg

One thing that the United Nations have been pushing for is that Central African Republic have new national elections, in order exude a sense of normalcy. Elections had been scheduled for October 18, but now they are being postponed.

From the point of view of Generational Dynamics, elections are nice to have, but when you have tens or hundreds of thousands of Muslims and Christians slaughtering each other, burning down each other’s homes, raping each other’s wives and decapitating them, then no one is going to stop to vote.

CAR’s Christian foreign minister Samuel Rangba gave a speech on Wednesday to the United Nations General Assembly in New York. He would like the UN to lift its arms embargo, so that the government can import weapons and rearm the army and police:

You can’t support a country without the military and public force necessary to establish the authority of the state.

I doubt that anyone seriously believes that arming the Christian security forces would bring the violence to an end, or would do anything but increase the violence against Muslims.

Pope Francis is scheduled to visit Bangui soon, as well as Nairobi in Kenya and Kampala in Uganda. However, the resurgence of violence in CAR may force the visit to be canceled. According to Bishop Nongo Aziagbia:

The situation in Bangui is a matter of great concern. If stability is not re-established, that might affect a number of things, including the papal visit. We’re praying for reason, peace and understanding.

Unfortunately, it’s going to be a long time before reason, peace and understanding prevail in Central African Republic. AP and Catholic Herald and International Crisis Group