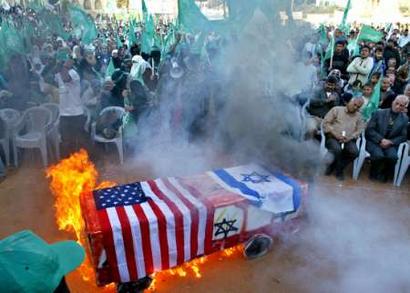 How deep are the ties between the so-called antiwar group Code Pink and the terrorist group Hamas? Deep enough that Hamas guaranteed Code Pink’s safety when the group led an international delegation of anti-Israel leftists to Gaza in late December for the ‘Gaza Freedom March.’

Code Pink claims to have delivered “tens of thousands of dollars in humanitarian aid” to Hamas-controlled Gaza to protest a blockade of the terrorist enclave by the civilized world.

Before Code Pink departed for Egypt where the march was based, co-founder Medea Benjamin told the Western Massachusetts publication The Reminder that Hamas “has pledged to ensure our safety.”

Hamas organized the ‘Freedom March’ in Gaza for Code Pink and provided security. The terrorist group protected the marchers during their two-day stay in Gaza by establishing tight control over their movements and contacts in Gaza and by forcing them to stay in a Hamas-owned hotel that one marcher described as “the nicest hotel I’ve ever stayed at. The 5 star Commodore hotel in Gaza city with a view of the Mediterranean Sea.”

Hamas ‘Prime Minister’ Ismail Haniyeh addressed the marchers in Gaza by cell phone, while other Hamas officials spoke in person.

Code Pink was co-founded by Jodie Evans, a top donor and fundraiser for President Barack Obama. Jodie Evans has maintained close ties with Obama and his administration throughout the first year of Obama’s term in office, including two visits to the White House in June just days after a previous Code Pink trip to Gaza where they were given a letter from Hamas to deliver to Obama. The White House visitor log below shows Jodie Evans’ name circled in red. 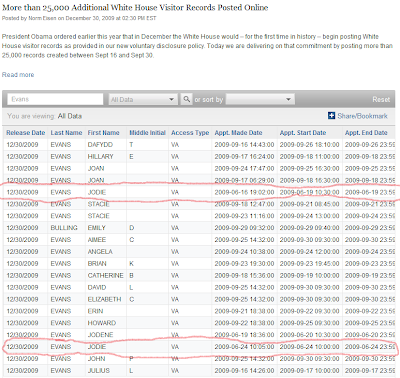 Code Pink says it has organized seven delegations to Hamas-controlled Gaza in the past year.

Jodie Evans and Code Pink were joined in Egypt on this visit by other friends of Obama, including his Hyde Park, Chicago neighbors, former Weather Underground terrorists Bill Ayers and Bernardine Dohrn.

Code Pink’s initiation of its pro-Hamas, anti-Israel campaign followed a September 2008 meeting with Hamas patron President Mahmoud Ahmadinejad of Iran in New York City. Two months later, shortly after Obama was elected U.S. president, Jodie Evans and Code Pink visited Iran at the personal invitation of Ahmadinejad. The group stayed mainly in Tehran and was taken by the head of the U.S. Desk of Iran’s Foreign Ministry Davood Mohammad Niar to visit the holy city of Qom.

Since its inception in 2002, Code Pink has worked closely with terrorist groups and state sponsors of terrorism to undermine the United States’ efforts in the war on terror. At the same time, the group has been embraced by the ‘progressive’ wing of the Democratic party at all levels, including the White House.

Code Pink’s latest trip to Gaza was timed to mark the one year anniversary of Israel’s defensive action in Gaza in December, 2008 to stop Hamas’ indiscriminate rocket attacks on Israeli civilians. Over 3300 rockets had been launched from Gaza into Israel in the preceding months.

Code Pink endorsed the “Cairo Declaration to End Israeli Apartheid” by the the anti-Israel, pro-Hamas leftists gathered for the ‘Gaza Freedom March.’ The declaration calls for a boycott of Israel encompassing economics, travel, academics, culture and sports, with a focus on intimidating workers through trade unions.

Jodie Evans and Code Pink called the tunnels “the commercial lifeline for the people of Gaza” in a statement issued January 7th announcing that Code Pink was joining a lawsuit against the Egyptian government over construction of the subterranean barrier.

Israeli Prime Minister Benjamin Netanyahu said this past week that Iran uses the tunnels to smuggle rockets into Gaza for use against Israel.

A U.S. Treasury Department statement issued in 2003 gave a succinct description of U.S. sanctions against Hamas:

Under Executive Order 13224, the United States government may block the assets of HAMAS (which it has done) and the assets of individuals and entities owned or controlled by; acting for or on behalf of; or providing support, financial or otherwise, to designated terrorists and terrorist organizations. HAMAS has been designated as a Foreign Terrorist Organization (66 Fed. Reg. 51088) and as a Specially Designated Global Terrorist (SDGT) under Executive Order 13224, “Blocking Property and Prohibiting Transactions with Persons who Commit, or Support Terrorism.”

Will Code Pink be prosecuted by Obama’s Justice Department for aiding Hamas?

Fat chance as Obama received about $33,000 in illegal campaign contributions from Gaza during his presidential campaign which the campaign reported to the FEC as having been made from the state of Georgia. The campaign eventually returned the money to the Gazans.