PHILADELPHIA (AP) — The death toll climbed to seven Wednesday with the discovery of another body in the wreckage Wednesday as investigators tried to determine why an Amtrak train hurtled off the tracks while rounding a sharp curve.

More than 200 people were injured in the wreck that plunged screaming passengers into darkness and chaos Tuesday night.

According to CBS Philadelphia, sources say that dozens out of the 238 passengers and five crew members on board the train are still unaccounted for in the wake of the derailment

Investigators recovered the locomotive’s black box data recorders and said they expected them to yield crucial information, including how fast the train was going when it jumped the tracks in an old industrial neighborhood not far from the Delaware River shortly after 9 p.m.

“It’s a devastating scene. There are many first responders out there. They are working. They are examining the equipment, seeing if there are any more people in the rail cars,” Robert Sumwalt of the National Transportation Safety Board said.

Mayor Michael Nutter said some people remained unaccounted for, though he cautioned that some passengers listed on the Amtrak manifest might not have boarded the train, while others might not have checked in with authorities.

The dead included an employee of The Associated Press and a midshipman at the U.S. Naval Academy.

“We are heartbroken by what has happened here,” Nutter said.

The train was en route from Washington to New York with 238 passengers and five crew members listed aboard when it lurched to the side and flew off the tracks at a notorious curve not far from the scene of one of the nation’s deadliest train wrecks more than 70 years ago.

The speed limit is 70 mph just before the curve and 50 mph along the curve itself, the Federal Railroad Administration said.

Passengers scrambled through the windows of toppled cars to escape. One of the seven cars was severely mangled. Hospitals treated more than 200 people for injuries that included burns and broken bones. At least 10 were hospitalized in critical condition.

The accident closed the nation’s busiest rail corridor between New York and Washington – snarling the morning commute and forcing thousands of travelers to find some other way to reach their destination – as federal investigators arrived to begin examining the twisted wreckage, the tracks and the signals.

The conductor survived and was expected to give a statement to police. The train also had a video camera in its front end that could yield clues to what happened, Sumwalt said.

Amtrak inspected the stretch of track on Tuesday, just hours before the accident, and found no defects, according to the Federal Railroad Administration.

Passenger Jillian Jorgensen, 27, was seated in the quiet car – the second passenger car – and said the train was going “fast enough for me to be worried” when it began to lurch to the right.

The train derailed, the lights went out and Jorgensen was thrown from her seat. She said she “flew across the train” and landed under some seats that had apparently broken loose from the floor.

Jorgensen, a reporter for The New York Observer who lives in Jersey City, New Jersey, said she wriggled free as fellow passengers screamed. She saw one man lying still, his face covered in blood, and a woman with a broken leg.

She climbed out an emergency exit window, and a firefighter helped her down a ladder to safety.

“It was terrifying and awful, and as it was happening it just did not feel like the kind of thing you could walk away from, so I feel very lucky,” Jorgensen said in an email to the AP. “The scene in the car I was in was total disarray, and people were clearly in a great deal of pain.”

Award-winning AP video software architect Jim Gaines was among those killed. Gaines, a 48-year-old father of two who joined the news agency in 1998, had attended meetings in Washington and was returning home to Plainsboro, New Jersey.

The Naval Academy did not immediately release the name of the midshipman killed. It said the student was on leave and heading home.

All seven train cars, including the engine, were in “various stages of disarray,” Nutter said. He said there were cars that were “completely overturned, on their side, ripped apart.”

An AP manager, Paul Cheung, was on the train and said he was watching a video on his laptop when “the train started to decelerate, like someone had slammed the brake.”

“Then suddenly you could see everything starting to shake,” he said. “You could see people’s stuff flying over me.”

Cheung said another passenger urged him to escape from the back of his car, which he did. He said he saw passengers trying to get out through the windows of cars tipped on their sides.

“The front of the train is really mangled,” he said. “It’s a complete wreck. The whole thing is like a pile of metal.”

Gaby Rudy, an 18-year-old from Livingston, New Jersey, was headed home from George Washington University. She said she was nearly asleep when she suddenly felt the train “fall off the track.”

The next few minutes were filled with broken glass and smoke, said Rudy, who suffered minor injuries. “They told us we had to run away from the train in case another train came,” she said.

Another passenger, Daniel Wetrin, was among more than a dozen people taken to a nearby elementary school.

“I think the fact that I walked off kind of made it even more surreal because a lot of people didn’t walk off,” he said. “I walked off as if, like, I was in a movie. There were people standing around, people with bloody faces. There were people, chairs, tables mangled about in the compartment … power cables all buckled down as you stepped off the train.”

Several people, including one man complaining of neck pain, were rolled away on stretchers. Others wobbled as they walked away or were put on buses. An elderly woman was given oxygen.

The area where the wreck happened is known as Frankford Junction, situated in a neighborhood of warehouses, industrial buildings and homes.

It is not far from the site of the 1943 derailment of the Congressional Limited, from Washington to New York, which killed 79 people.

Amtrak carries 11.6 million passengers a year along its busy Northeast Corridor, which runs between Washington and Boston.

The mayor, citing the mangled tracks and downed wires, said: “There’s no circumstance under which there would be any Amtrak service this week through Philadelphia.”

Images from witnesses and local media: 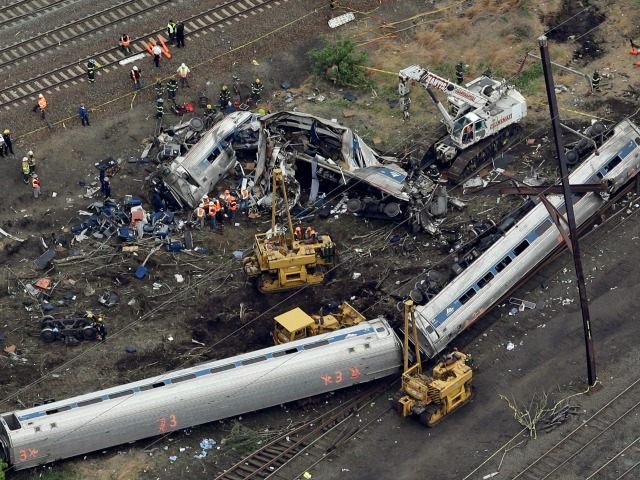 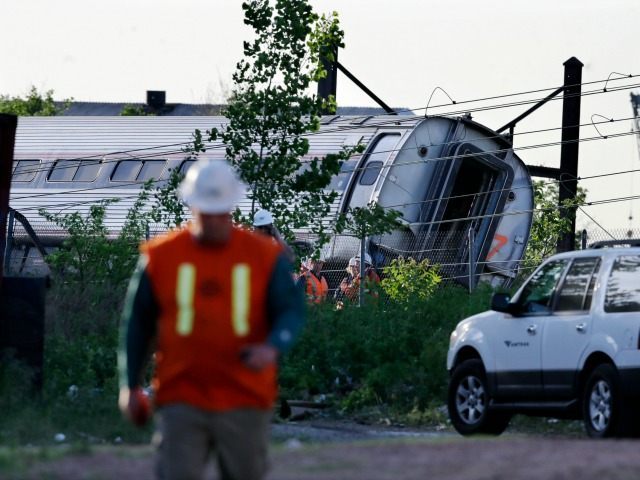 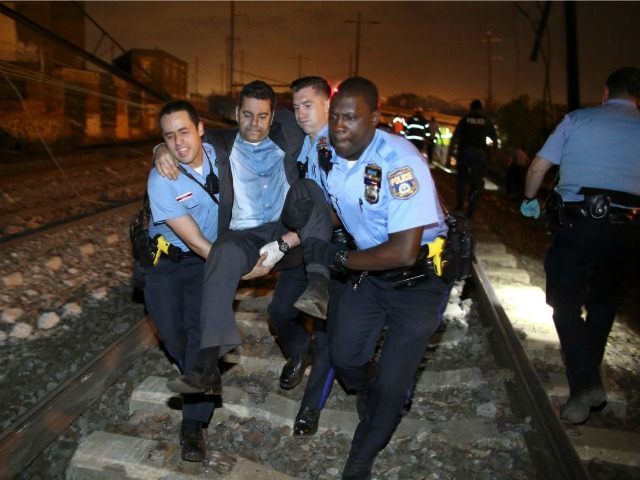 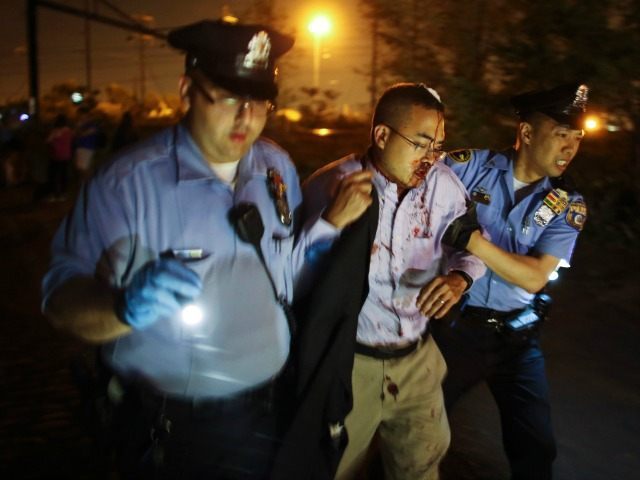 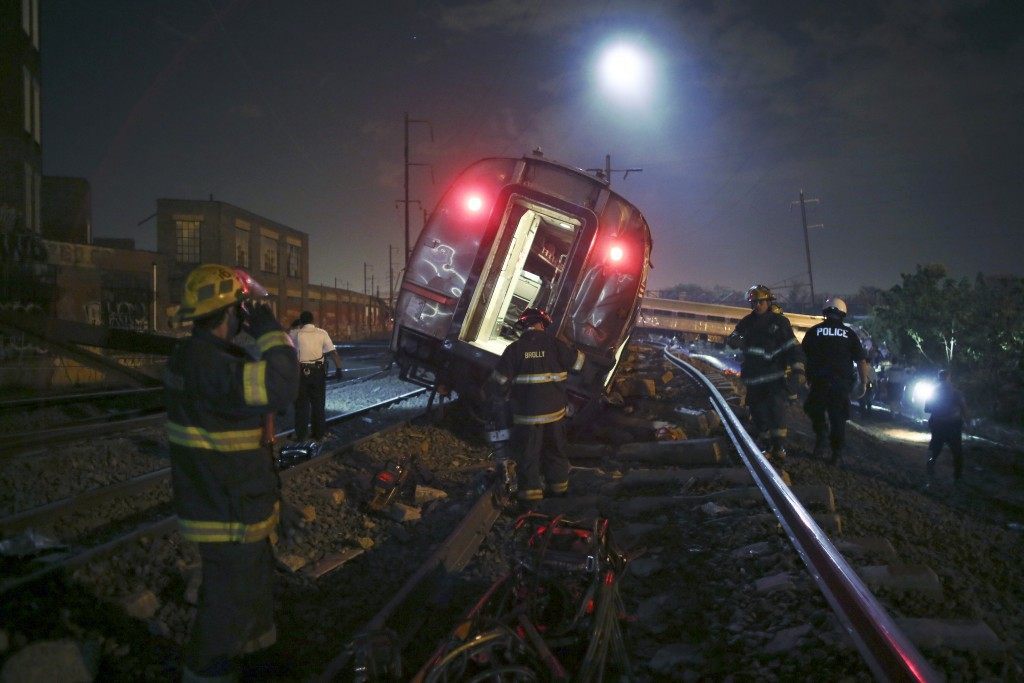 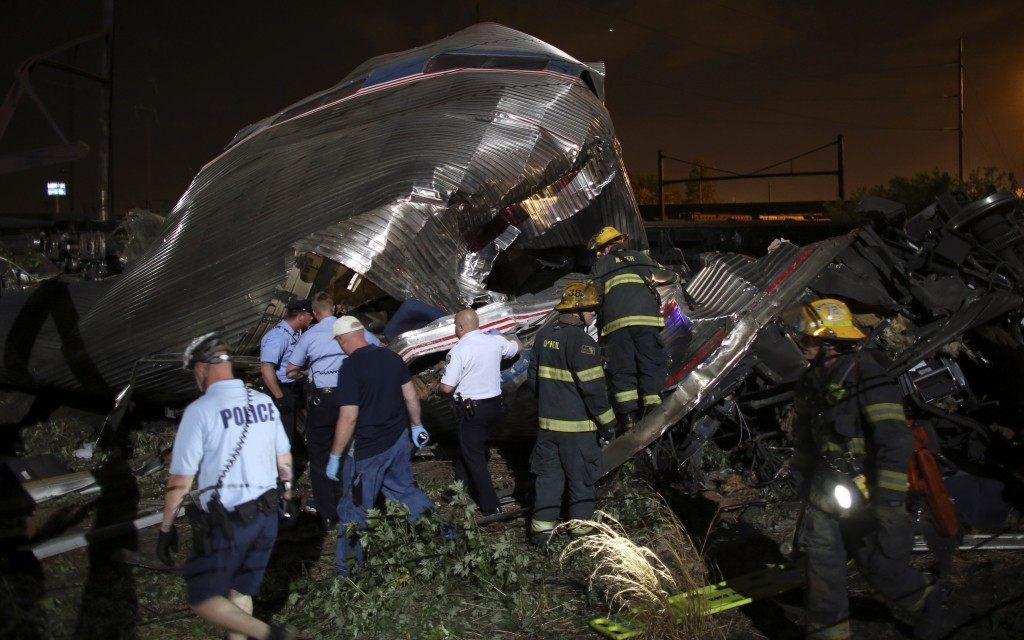 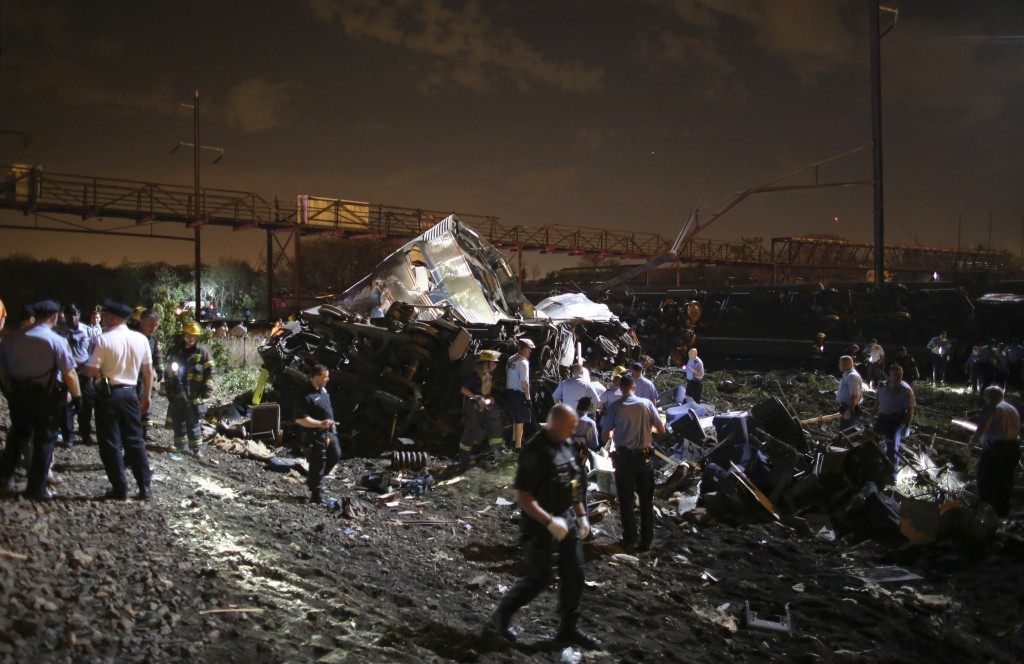 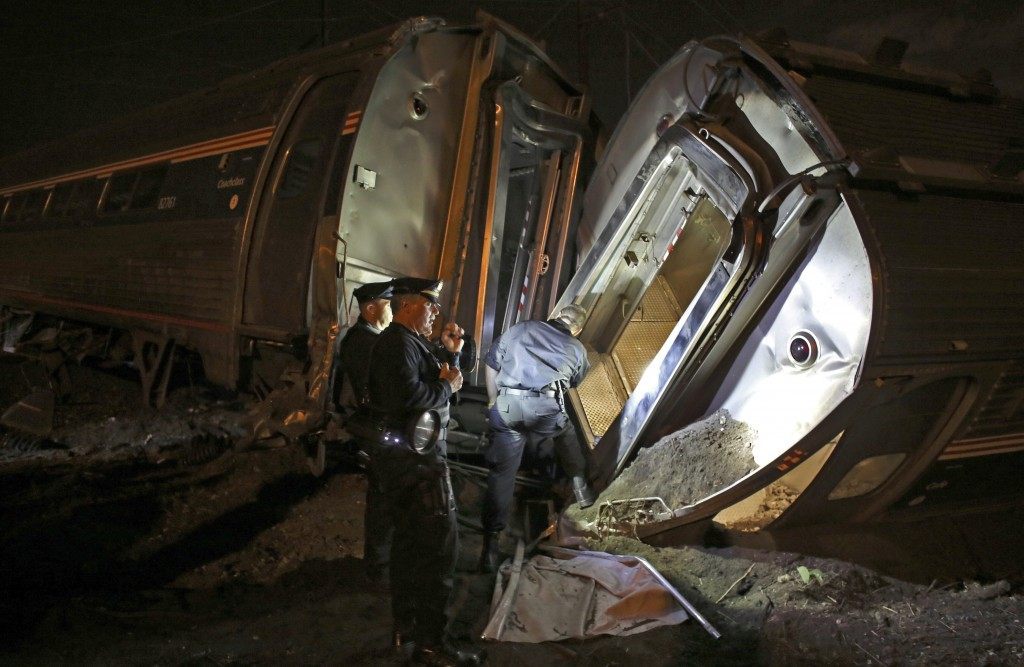 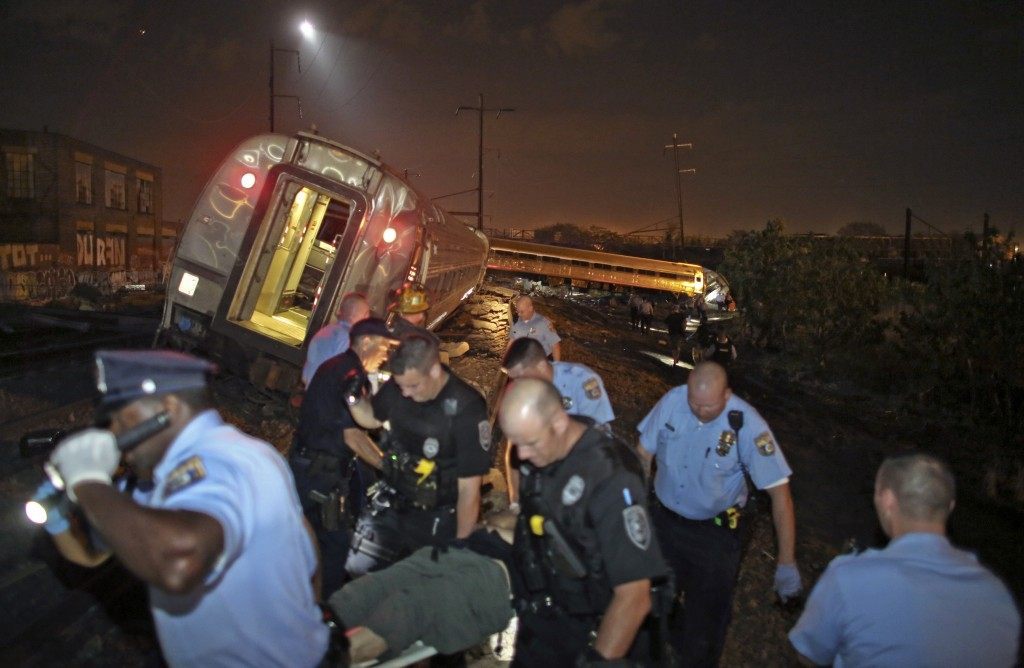 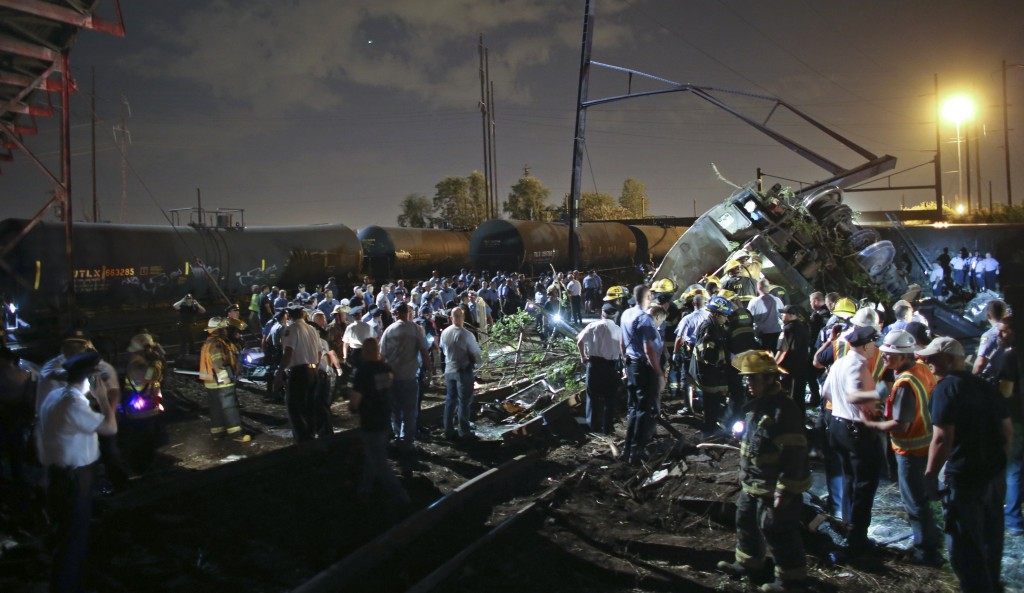 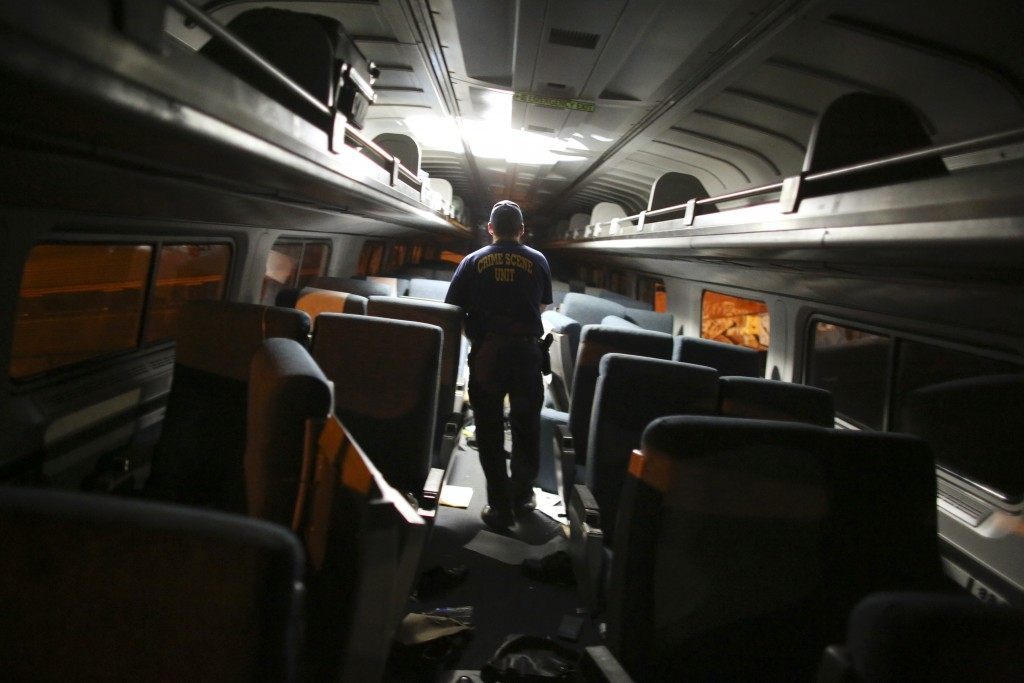 Scene from the Amtrak crash: "We kicked out the window in the top of the train car and helped get everyone out." http://t.co/gYYrnTGCI4

Was just on #Amtrak train that crashed pic.twitter.com/NSGh1ZfW1o

Lot's of injuries at the #amtrak derailment. #Pray pic.twitter.com/DADBYAqojg