Republican Presidential candidate Gov. Scott Walker (R-WI) has cancelled his campaign events scheduled for today in order to attend the funeral of one of the five service members killed in the Chattanooga, Tennessee shooting, Breitbart News has learned.

Marine Sgt. Carson Holmquist, 25, a native of Wisconsin, was killed on July 16th when a gunman opened fire at a Chattanooga Naval Reserve support center. According to Fox 6 Milwaukee, Holmquist was born in St. Croix Falls, Wisconsin, and graduated from Grantsburg High School.

Holmquist joined the United States Marine Corps in 2009, and his service included deployments in Afghanistan and Okinawa, Japan. He was awarded the Navy & Marine Corps Achievement Medal, the Afghanistan Campaign Medal, a Global War of Terrorism Service Medal, and two Sea Service Deployment ribbons. Holmquist married his wife Jasmine in 2012, and they had a son, Wyatt Allen. 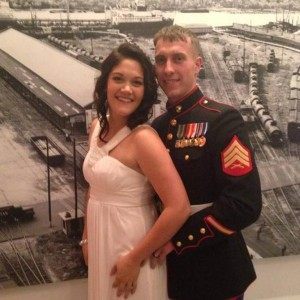 Funeral arrangements are being handled by the Swedburg-Taylor Funeral Home in Grantsburg, Wisconsin, which has set up a page for online condolences.