As part of his three-day trip to Alaska, President Obama made a surprise trip to snuggle with some Husky puppies.

Obama stopped at a doglot belonging to 2011 Iditarod Trail Sled Dog Race champion John Baker after visiting a sea wall in the town of Kotzebue.

After Baker introduced Obama to the puppy, he immediately grabbled one and held it closely. 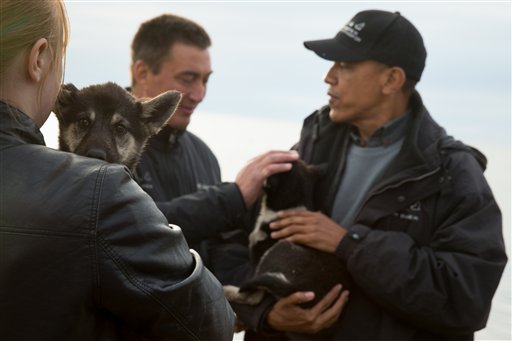 (Photo via the Associated Press)

“Sweetie, you’re OK, sweetie,” Obama told the puppy named “Feather” as stroked it. He continued to hold the puppy as he went over to view one of Baker’s dog sleds.

Obama was also given a team branded baseball cap and jacket provided to him by the racing team which he put on immediately.