Talk radio host Glenn Beck, who was in Nevada campaigning on behalf of Ted Cruz at the caucus, denounced Donald Trump’s supporters as “brown shirts” after the GOP frontrunner upstaged Beck by making an impromptu appearance at the same caucus venue he was speaking at.

Beck took to Facebook to protest the behavior of Trump supporters, describing them as “some of the nastiest people I have ever been with.”

“We have their hate and rage on tape,” Beck wrote. “Others around them were embarrassed for them. It was scary and sad.”

“All candidates have someone speak for them at the caucus. In the middle of my speech Trump walked in,” Beck explained, linking to a Politico article about Trump’s surprise appearance at the same location Beck was speaking at.

“I believe Trump, whether he knows it or not, is grooming brown shirts,” Beck stated, adding, “Don’t believe me, go to a caucus.”

At his brief appearance, which MSNBC carried live, Trump said, “We are going to have hopefully a historic night. I appreciate everybody being here. I wanted to be here myself and say a few words.”

Trump didn’t stay long, as he promised his supporters on Twitter that he would be making appearances “at various caucus sites.”

GO VOTE FROM NOW TO 8:30 P.M. NEVADA. I WILL BE AT VARIOUS CAUCUS SITES. MAKE AMERICA GREAT AGAIN!

Beck ended his Facebook note by musing that the 6’2” Trump is “even smaller in person than I remember. I think it is simply what he says that make him appear that way.”

Beck endorsed Cruz before the Iowa caucus last month and has been traveling and campaigning with the Texas senator ever since. After Cruz’s third place finish in South Carolina, Beck invited his Facebook followers to join him and his family in fasting for Cruz in the run-up to the Nevada caucus.

Beck has been staunchly opposed to Trump’s candidacy and particularly critical of his supporters. He has suggested that Trump’s Tea Party supporters are racist for opposing President Obama while supporting Trump, who Beck considers to be a leftwing progressive.

This latest dust-up isn’t the only controversy surrounding Beck today. The museum spokesperson at George Washington’s Mount Vernon estate told the Huffington Post that George Washington’s two copies of Miguel de Cervantes Don Quixote are “stored safely” in their collection. Beck has been carrying around a copy of the classic novel as a prop in his stump speech for Cruz, telling audiences that his book was the very one that George Washington purchased on the same day the Constitution was signed. The curators at Mount Vernon helpfully tweeted a photograph of the real copy Washington purchased that day:

Washington bought the book Don Quixote on 9/17/1787, the day the Constitution was signed. It's still housed @GWBooks pic.twitter.com/4JPfQOrCKG

Beck has not yet responded to explain the provenance of the book he’s been describing as Washington’s copy of Don Quixote. 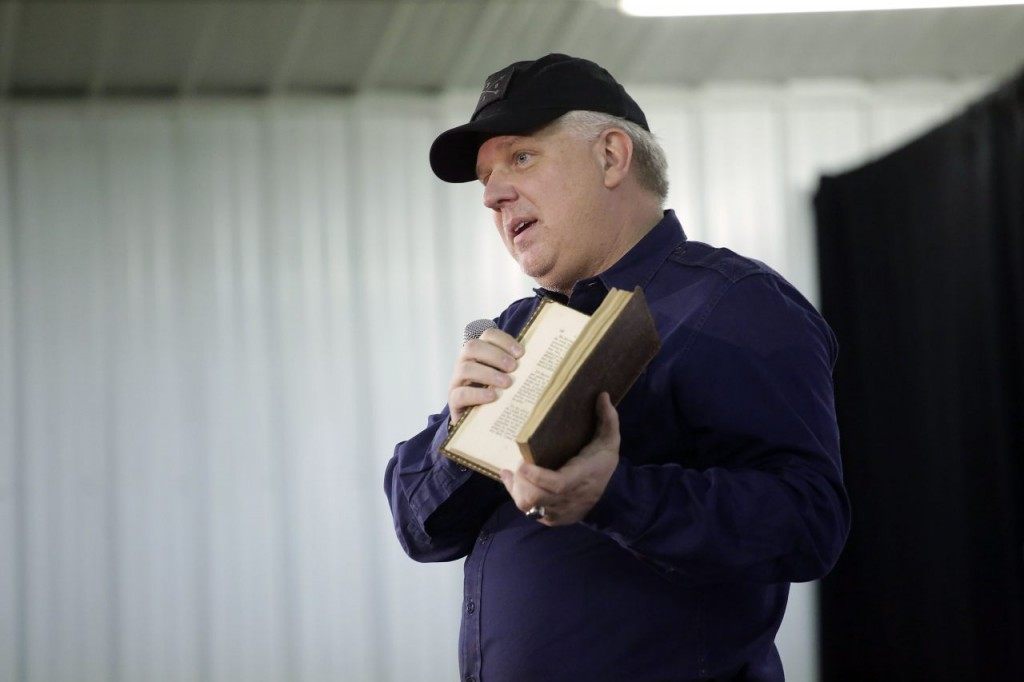 On the campaign trail for Ted Cruz, Beck has been using as a prop in his stump speech what he alleges is George Washington’s copy of “Don Quixote.” (Photo by Joshua Lott/Getty Images)