Louisiana State Police (LSP) were investigating an earlier minor injury, single car accident and St. John the Baptist Fire Department was protecting the scene along with LSP when the bus Rodriguez was allegedly driving struck the fire truck on scene. LSP stated that the party bus had been “traveling at a high rate of speed” when it struck the fire engine, then a Toyota Camry that it pushed into another truck and trailer, then struck three firefighters that had been standing near a guardrail.

A portion of the LSP statement describes what happened next:

The firefighters were thrown over the edge of the elevated interstate into the water below, approximately 30-40 feet. The Fire Chief, Spencer Chauvin, was transported to River Parishes Hospital where he was pronounced deceased. Firefighter William Mack Beal (age 35) of Gonzales, LA was transported to a local facility with moderate injuries, and Firefighter Nicholas Saale (age 32) of Ponchatoula, LA was airlifted to University Medical Center Level 1 Trauma Center with critical injuries.

One of the four occupants of the Camry died on scene, 21-year-old Jermaine Starr. The driver was airlifted with serious injuries and two other passengers were taken to the hospital, one in critical condition, the other in serious condition.

Photos of the wreckage, courtesy of Louisiana State Police, show the extensive damage: 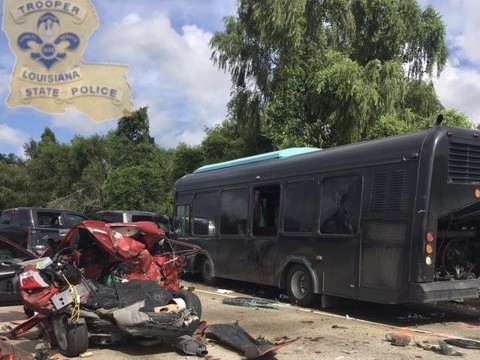 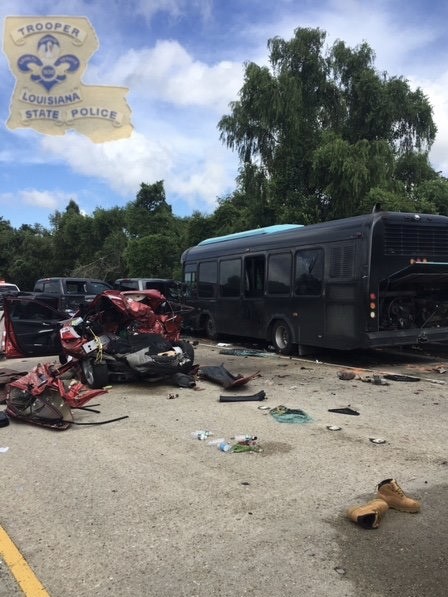 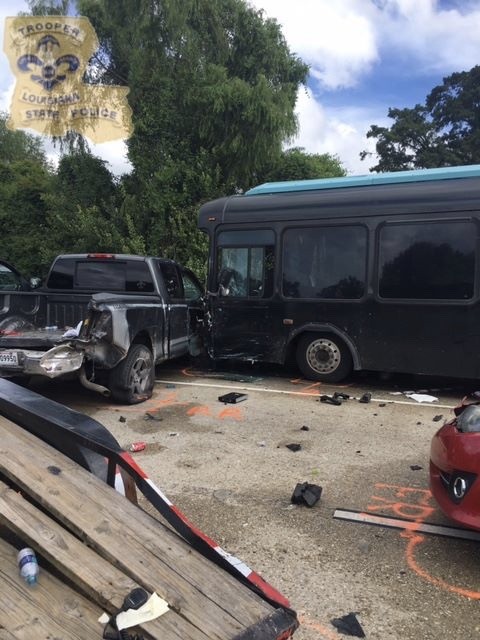 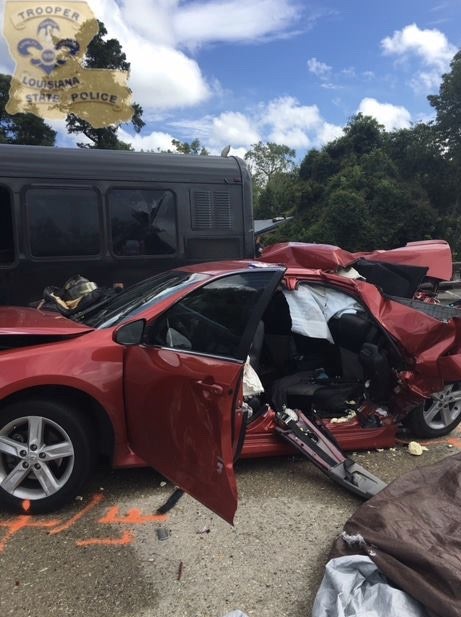 Rodriguez was found to be a 37-year-old Honduran national illegally present in the United States and was driving without a license, according to state police. Kristina’s Transportation LLC/AM Party Bus owns the bus.

“This is a very sad day for all first responders in Louisiana,” said Colonel Mike Edmonson, Louisiana State Police Superintendent according to the Louisiana State Police. “Our thoughts and prayers are with the St. John the Baptist Fire Department. Louisiana has the “Move Over” law in place to protect our first responders on our roadways. Please adhere to this law and slow down when approaching emergency vehicles and disabled vehicles on the road.”

It is a sad day in St. John the Baptist Parish as we lost one of the bravest and most dedicated firefighters that I know.  Our thoughts and prayers go out to his family, as well as to the families of the other 2 firefighters involved in the accident.

This was a horrific accident and one that is still very active. This type of loss will affect the entire department and they will have our full support as they deal with the grief of losing a comrade.  It is heartbreaking, especially after this same group of individuals helped to guide St. John the Baptist Parish safely through Hurricane Isaac, the February tornado and the flood event last week.  Please pray for all involved and please pray for our community.

At the time of the police statement, Rodriguez was set to be booked into the St. John the Baptist Correctional Center on “two counts of Negligent Homicide, Reckless Operation, Negligent Injuring and No Driver’s License.” Additional criminal charges will be forthcoming, police said. The crash is still under investigation with Homeland Security Investigations assisting the state police.