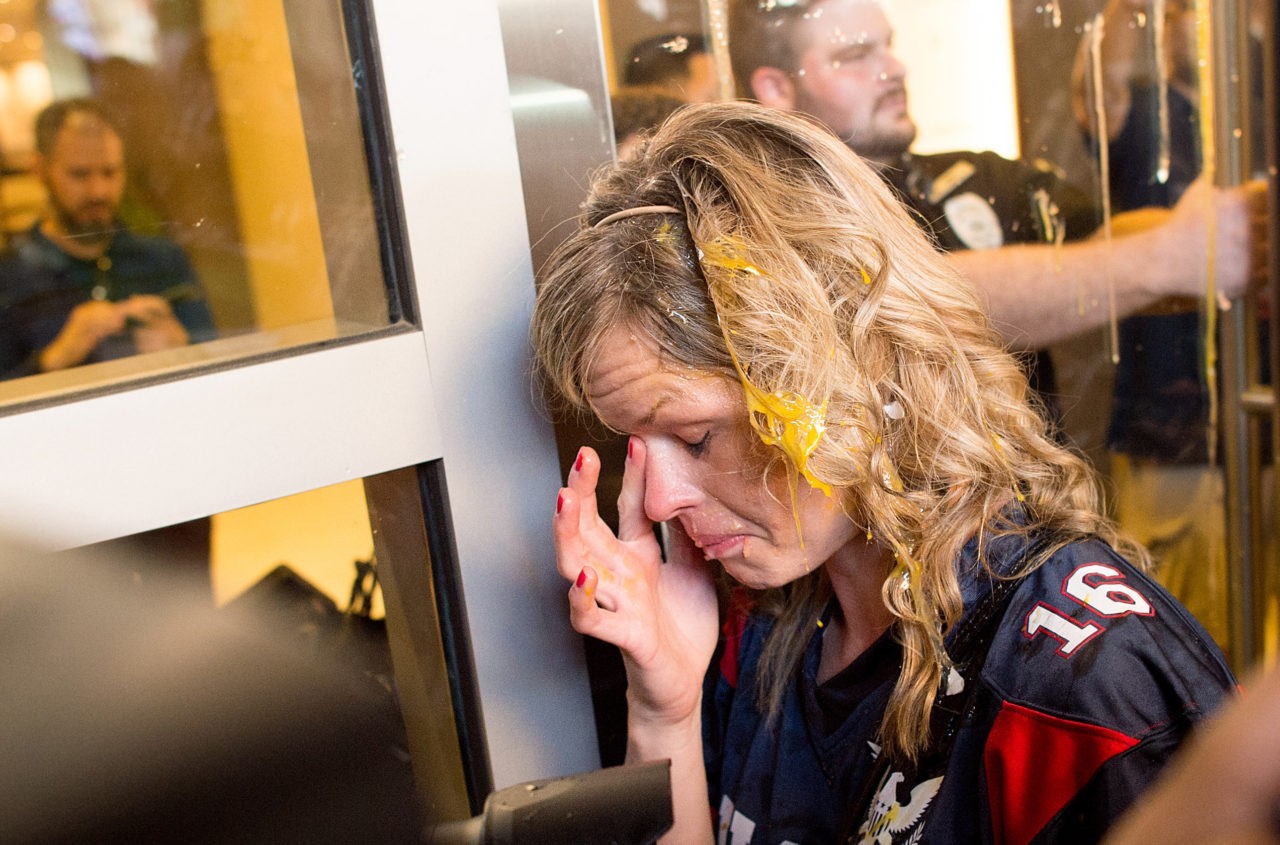 Above: A Trump supporter has eggs thrown at her (Noah Berger/The Associated Press)

Above: A Trump supporter gets sucker punched

On June 2, 2016, extreme left groups converged on a Trump rally in San Jose, California with various messages including “America was Never Great”, “Get off Mexican/native soil” and “F*ck Donald Trump.” Some of the protesters threw eggs at a Trump supporter. Others snuck up and punched Trump supporters leaving the rally. The ensuing havoc led to the victims of this assault to sue San Jose, the city mayor, and the city police chief over negligence in failing to prevent the chaos. 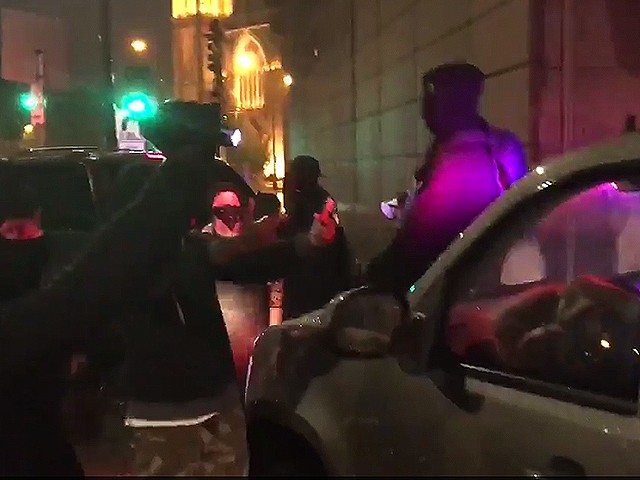 Above: Protesters trying to stop Donald Trump’s motorcade after his Minneapolis fundraiser (Twitter/@EmmaSapong)

Some protesters got aggressive at the end of the night as Trump supporters left Minneapolis fundraiser. @StarTribune pic.twitter.com/gNcZGYhqBm

Above: A video of the protesters

A group of Leftists assaulted Donald Trump’s motorcade and spat on his supporters in Minneapolis on August 19. The local media reported the raucous reception with the headline, “Donald Trump Fundraising Event in Minneapolis draws GOP Donors, Protesters to Convention Center.” With no mention of the protesters, the report went on to claim, “Donald Trump roiled Minnesota politics for a few hours Friday night.” 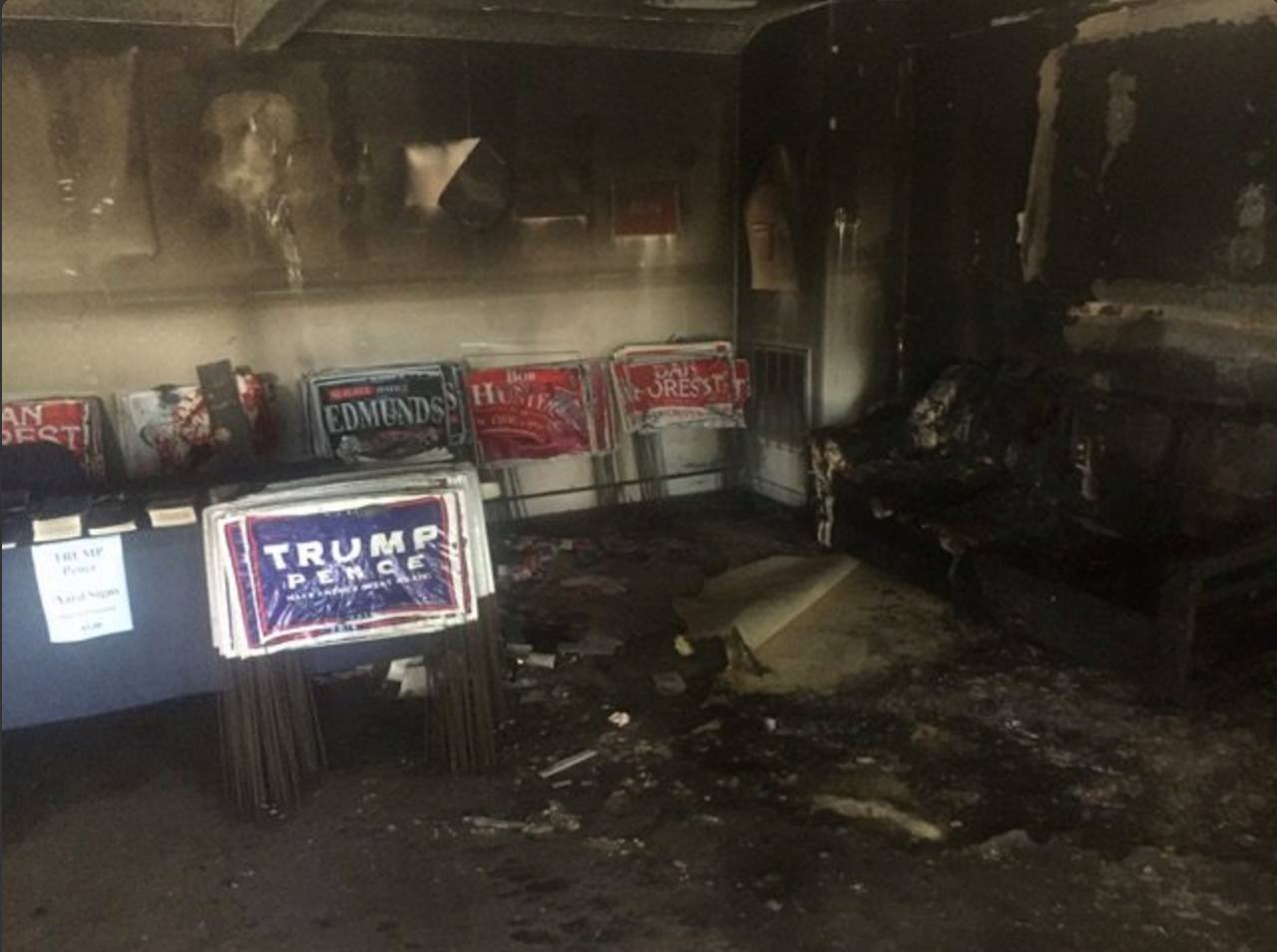 “Nazi Republicans, leave town or else” was the message scrawled on a neighboring building to the bombed- out GOP HQ. Then-Governor Pat McCrory called the outburst “political terrorism.” In response to the attack, Donald Trump tweeted out, 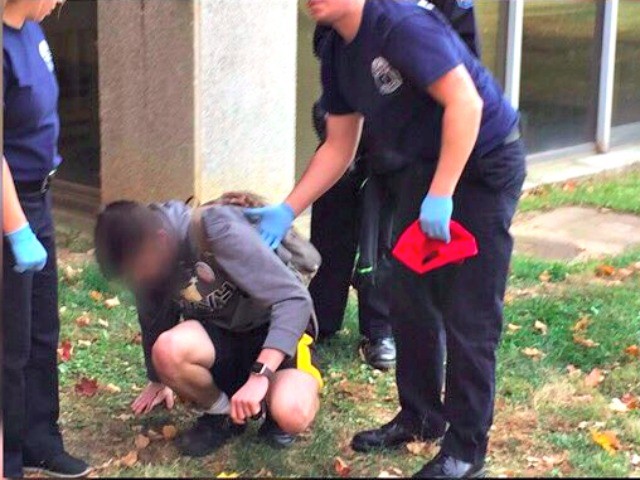 “They jumped him and beat him up pretty bad,” a witness recounted to WTOP radio. The victim, wearing a “Make America Great Again” hat, was beaten during a walkout anti-Trump protest from Montgomery High School in Rockville, Maryland. Police officers claimed the victim displayed no signs of aggression during the attack.

Above: A young, mentally disabled man had his torture live streamed as his captors shouted anti-Trump and anti-white epithets.

In what is perhaps the most sinister example on this list, a young 18-year-old with schizophrenia was beaten and tortured in a Chicago home in January of 2017. His torturers live streamed the affair on Facebook Live. He was forced to drink toilet water and part of his head was scalped. While the young man’s political affiliation remains unknown, his attackers shouted, “F*ck Trump” and “F*ck white people.” The whole episode was so horrendous that it drew significant mainstream media attention and condemnation from then-President Obama. 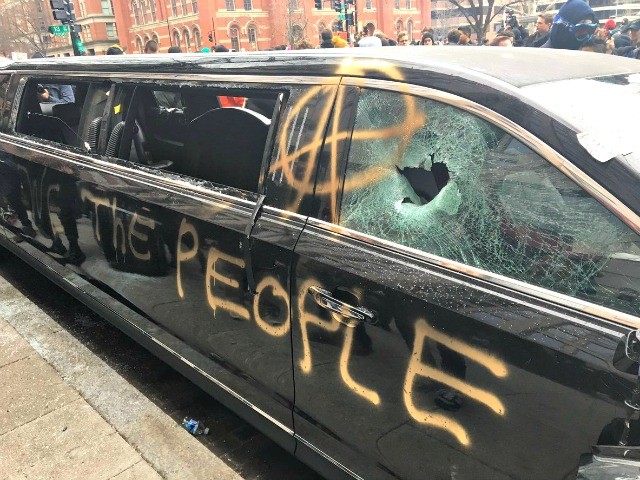 Antifa’s representatives and members of like-minded organizations such as BAMN, proudly engage in violence with the justification that any speech they do not like is, in fact, self-defense against future violence.

Their rage was on full display in Washington, DC in the days surrounding Trump’s inauguration. Rioters smashed the windows of cars and businesses. One Trump supporter was assaulted as he attempted to put out Antifa-ignited fires. As Breitbart News reported:

Anti-Trump protesters wearing black masks clashed with police officers in front of the National Press Club Thursday night, January 19, 2017. The pro-Trump “DeploraBall” event inside drew the ire of the hundreds of anarchists and their associates. Many of the mask-clad protesters physically resisted police efforts to clear the sidewalk as others shot their middle fingers to the police officers.

7. Antifa Goes on Rampage in Berkeley to Protest Milo Yiannopoulos 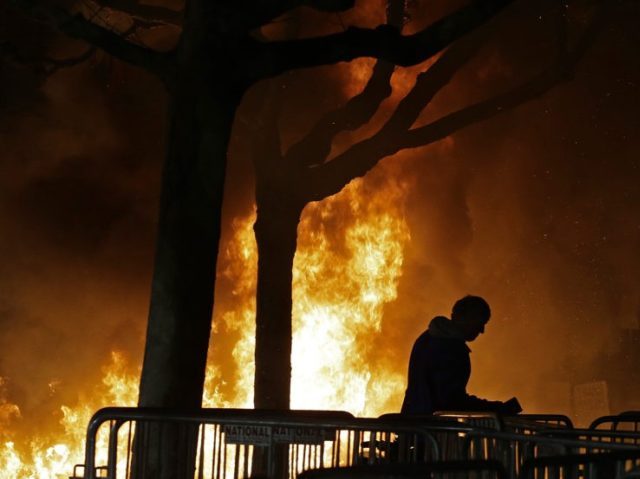 Above: Burning Berkeley (The Associated Press)

Above: A Trump supporter is pepper sprayed by while giving an interview at UC Berkeley

A student got pepper sprayed, fires raged across campus, windows got smashed and dozens of Milo fans were assaulted on February 1, 2017. Leftist responses to the Berkeley maelstrom (the first of many for 2017) ranged from praise, to conspiracy theories and to blaming Trump. Many were quick to point out that the iconic flashpoint of free speech protests had now become a symbol of suppression of free speech.

Above: A video depicting the assault of a Trump supporter

On April 15, an assailant later identified as a college professor, Eric Clanton, reportedly beat a Trump supporter with a bike lock. Clanton snuck up on him and quickly ran away after the blow to the head. He was later identified and arrested. He faces three counts of suspicion of assault with a deadly weapon that is not a firearm and assault causing bodily injury. 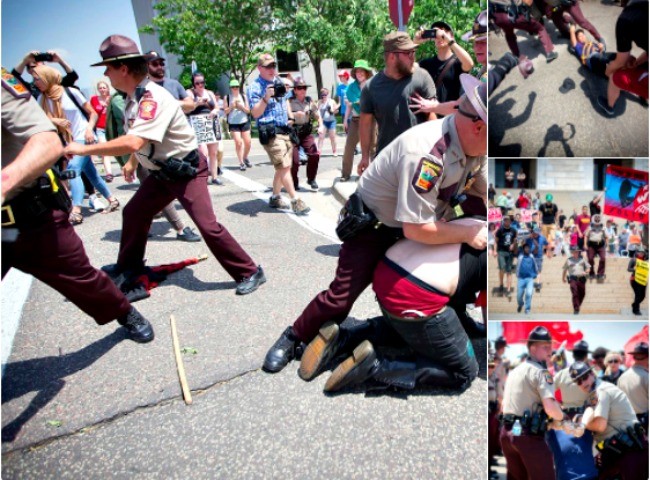 Above: Scenes at an Anti-Sharia march on June 10, 2017 (Twitter/@StarTribune)

Above: Video of the attack

Members of Antifa threw urine on Libertarian blogger Lauren Southern and her friends as she was being interviewed during a march against Sharia law on June 10. She responded:

This list is by no means exhaustive. Indeed, it does not even scratch the surface of calls for violence in rhetorical discourse. To give perspective, over 12,000 tweets have called for Trump’s assassination since his inauguration.

This list merely highlights significant incidents of Leftist violence to illustrate heightening divisions in a country increasingly fractured on political fault lines. These divisions have grown to the point where it is not improbable that Wednesday’s alleged shooter could have been influenced by partisan rhetoric to shoot up a Congressional baseball game after rationalizing that “It’s time to destroy Trump & Co.” (His attempts were met with praise on the far-left corners of Twitter.)

These events and others have led commentators on both the right and the left to postulate whether America is perhaps in the beginning stages of Civil War.