Female soldiers must give “dignity and respect” to transsexual men who join them in their shared shower rooms, according to training manuals leaked by soldiers in a mandatory class.

But this “dignity and respect” is a one-way street, according to the training slides, which were developed by officials working for former President Barack Obama. “Transgender Soldiers are not required or expected to modify or adjust their behavior based on the fact that they do not ‘match’ other Soldiers,” according to the slides, which were first leaked by TheFederalist.com: 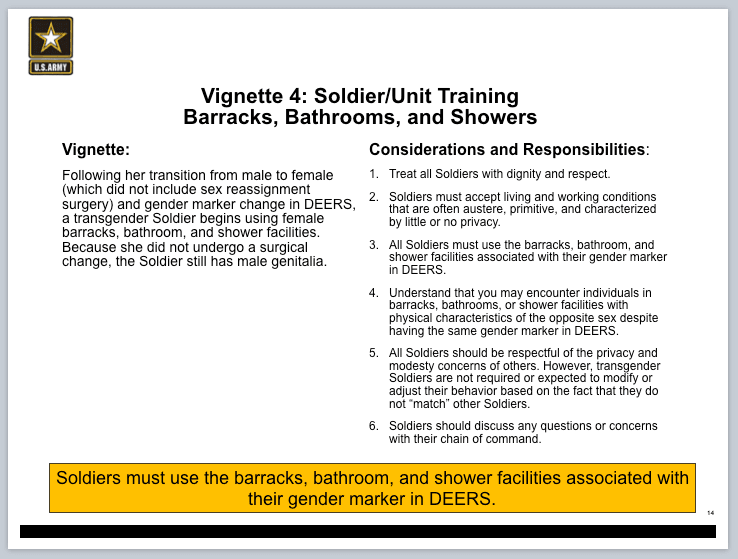 The insistence that women remain mute when a man enters their shower room “shows a lack of respect for the vast majority of service members [because] no consideration is given to their feeling about this circumstances,” said Peter Sprigg, senior policy studies expert at the Family Research Council in Washington.

Female soldiers in showers are supposed to ignore visible biology and “act as if nothing has happened when some male … is all of a sudden in the shower room with them,” said Austen Ruse, president of the Catholic Family and Human Rights Institute. “This is a flat-out humiliation of women. … Females will have their dignity and respect violated [and] they are being told this does not matter even a little bit,” he added.

Female soldiers will not even be allowed to cover themselves because it could signal a lack of “respect” for the transsexual man in the shower, Ruse said.

Several nations have decided to accept transsexuals into their militaries, including Sweden, Canada, Australia and New Zealand. In 2014, a group of those transsexual soldiers held a joint press conference with the ACLU in Washinton D.C. See photo above.

The demand for “dignity and respect” of transsexuals is shot through the Army documents because the “transgender ideology” insists that normal Americans — including American soldiers — must respect claims by men who insist they are women, regardless of their visible genitalia, civic practices, law, and science.

The justification for this transsexual demand is the unproven claim that all people have a so-far unverified “gender identity” that can be disconnected from their obviously female or male body. Transgender activists then argue that a person’s “gender identity” is more important than the fundamental sexual distinctions between male and female humans, and, in fact, also requires that the transgender men be treated as legal females, whether or not they have had surgery.

a documented medical treatment plan is complete, no functional limitations or complications persist, and the individual is not experiencing clinically significant distress or impairment in social, occupational, or other important areas of functioning. Continuing medical are, including but not limited to cross-sex hormone therapy, may be required to maintain a state of stability.

The shift to pro-transgender, anti-sex language also means there are no recognized male or female bodies in the military, nor are there any recognized members of the two sexes. Instead, the sex of each soldier is reduced to a mere “gender marker,” which is amputated from Americans’ expectations for the behavior of members of the male sex and the female sex. According to the new rules, the “gender marker” is a just “data element” in the “Defense Enrollment Eligibility Reporting system.”

This shift in focus from the sex of a soldier to the “gender marker” has additional impacts. For example, all soldiers are expected to take periodic drug tests by peeing into a cup in front of a higher-ranking soldier. This means female soldiers will be required to pee into cups while sitting beside a soldier with a female “gender marker,” even when the observing soldier is male. According to a document provided with the training. “It is DoD and Army Policy that a urinalysis sample must be collected by direct observation and that, absent an exception to policy, the observer will be the same gender as the Soldier being observed (as reflected by the gender marker in DEERS).”

The new policy of ignoring sexual differences in favor of a “gender marker” will apply throughout many Army procedures, including sharing bedrooms: “For facilities subject to regulation by the Army, a Soldier uses those billeting, bathroom, and shower facilities associated with the Soldier’s gender marker in DEERS.”

These military documents establish the transgender ideology as a government-backed belief system in place of Americans’ long-standing treatment of women and men as equal, different, and complementary, says Sprigg. The transgender rules are “really serving an ideological purpose, not a military purpose,” he said.

However, on June 30, Secretary of Defense James Mattis announced a six-month delay on the planned July 1 recruitment of transsexuals, scheduled by Obama officials, who also dropped the ban on open transsexuals in the military and commissioned the new training manuals.

The Mattis delay gives the military time to debate and prevent Obama’s damaging pro-transgender policies, said Sprigg. Under Obama, the military was “never asked ‘Do you think this is a good idea?’ – they were told this is what is going to happen,” he said.

For example, the financial costs of the pro–transgender rules will be enormous, he said. Obama’s officials promised to pay for the hormones and surgeries sought by new recruits, and accepted the extra costs of replacing transsexuals who cannot go to war because of their unique medical requirements, such as the muscle-weakening female hormones, he said. Those costs could reach $3.7 billion over the next ten years if the number of transsexual people in the military matches claims by transgender activists, he said.

If the military offers free medical services to transsexual recruits, the number of transsexuals in the military might increase, further boosting costs. Already, military doctors are required to provide transgender-related services to soldiers even if they judge those services are harmful, according to the Center for Military Readiness.

And if the military agrees to establish the transgender ideology at the end of the six-month delay, the pro-transgender campaign will be boosted in the nation’s courtrooms, capitols, and classrooms, said Ruse. “Every transgender activist can point to the military to say, ‘They’ve done, it, so we should do it… in grade schools, high schools, colleges, everywhere,” said Ruse.

The progressive outcome is possible because White House officials have not taken a strong stand against the transgender ideology’s hostility towards the two sexes, he said. “I’m very nervous,” said Ruse.

“We have not seen a lot of concern from Trump … [so] we’re working closely with allies on Capitol Hill,” said Sprigg.

The long-term goal “is cultural transformation, not one of increasing the effectiveness of our military,” said Sprigg.

The transgender ideology demands that the federal government force Americans to accept the “gender identity” sex-switching claims made by each person, regardless of scientific data about genetics, biology, and the variety of normal behavior and appearances shown by normal, equal, different, and complementary women and men, boys and girls.

The progressive push to bend Americans’ attitudes and their male-and-female civic society around the idea of “gender” has already attacked and cracked popular social rules for how Americans handle the many charming differences between complementary men and women.

To read more about the “transgender” ideology, visit here.