Roughly 40,000 illegal aliens who were previously shielded by a temporary amnesty program have obtained permanent amnesty by getting Green Cards through an immigration loophole, new federal data confirms.

The latest data from the United States Citizenship and Immigration Services (USCIS) agency confirms previous reports by Breitbart News, revealing that about 40,000 illegal aliens are now able to remain in the U.S. permanently.

Those illegal aliens were able to obtain Green Cards by using the immigration loophole known as ‘advanced parole’ where DACA recipients could leave the U.S., then re-enter the country and be considered ‘legal immigrants,’ thus able to apply for permanent residency and eventually citizenship. 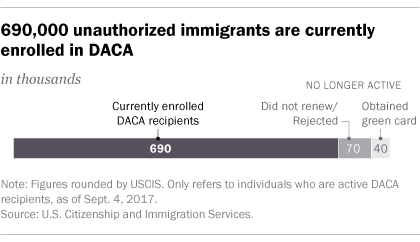 All of the illegal aliens who have gained permanent residency via Green Cards are now eligible for U.S. citizenship, something pro-American immigration reformers warned about years ago.

Since the USCIS data has come to light, the Trump administration has ended advanced parole for DACA recipients, immediately cutting off the backdoor flow of amnesty for illegal aliens.

President Trump, who adamantly opposed the amnesty for illegal aliens protected by DACA, has since defended the recipients of the program, as well as leveraging a deal where the foreign nationals could seek a pathway to citizenship through legal status, as Breitbart News reported.

Latest data from USCIS shows that 618,342 illegal aliens from Mexico currently have DACA status. If they were amnestied into the U.S., it would give them the opportunity to bring adult parents and relatives to the U.S.

According to Princeton University researchers Stacie Carr and Marta Tienda, for every one new Mexican immigrant to the U.S., an additional 6.38 Mexican nationals come to the U.S. through family-chain migration.

Based on the Princeton research, the 618, 342 illegal aliens from Mexico who are covered by DACA would be able to bring upwards of four million additional relatives and family members to the U.S. in the years to come.

But if the remaining roughly 180,000 DACA recipients were to bring the same number of family members as Mexican DACA recipients are expected to bring to the U.S., it would result in nearly 1.2 million more legal family-based immigrants coming to the country.

Although screening for DACA was previously touted as being sufficient in keeping criminals out, USCIS revealed that more than 2,100 recipients had their status revoked for being criminals or gang members.