President Donald Trump golfed again on Friday during his Christmas vacation and invited Coast Guardsmen to join him on his course.

About 60 “Coasties” joined the president at his Trump International Golf Course on Palm Beach, participating in a four-man scramble.

Trump allowed the press to take photographs of the group on the golf course as three men held a Coast Guard flag. A few of the Coast Guard members were wearing Make America Great Again hats.

“I like those hats,” he said as he shook hands with the guardsmen: 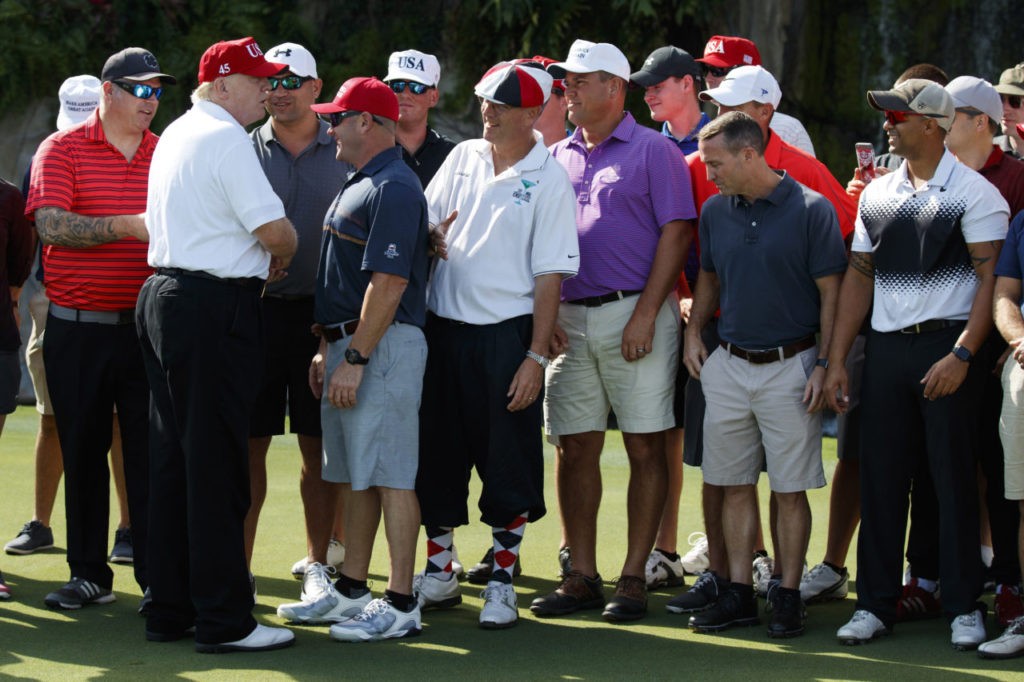 He joked about the servicemembers at the course who were watching him golf.

“Enjoy the course. I think all of you were watching my shot,” he said. “Don’t say I took a triple bogey when I actually did a birdie.”

The president has spent several days golfing during his vacation, inviting golfing professionals and a U.S. senator to join him on separate occasions.

But this time, he extended the invitation to the Coast Guard.

“These brave men and women patrol the waterways near Palm Beach and Mar-a-Lago every day,” Hogan Gidley, the White House deputy press secretary said in a statement to the media. “The president wanted to thank these servicemembers personally for their service to this nation.”

Trump demonstrated a special love for the Coast Guard after experiencing their bravery and hard work in the wake of the hurricanes that hit the United States in 2017.

“The Coast Guard, always respected. But if you were looking at it as a brand, there’s no brand that went up more than the Coast Guard, with what happened in Texas,” Trump told Coast Guardsmen during a visit to a Florida station in November for Thanksgiving.

During a Christmas teleconference with servicemembers of the Armed Forces, Trump praised their efforts in rescuing storm victims in Florida, Cuba, Texas, and Louisiana.

“What a job you’ve done,” he said. “The Coast Guard saved thousands and thousands of lives. Almost it’s unbelievable when I look at the charts; I saw the number of lives you saved.”