Immigration is the “most important problem” in the United States among Republican voters heading into the 2020 presidential election, a new poll finds.

According to the Reuters/Ipsos poll, when asked to rank the main issues facing the U.S., nearly 40 percent of Republican voters say immigration is the biggest problem, far outpacing every other issue.

Running second to immigration as the biggest problem in the U.S. is healthcare with 13 percent of GOP voters ranking it as the main issue facing the nation.

Increasingly, since 2017, American adults have said immigration is the biggest problem in the U.S., the Reuters/Ipsos poll has found. 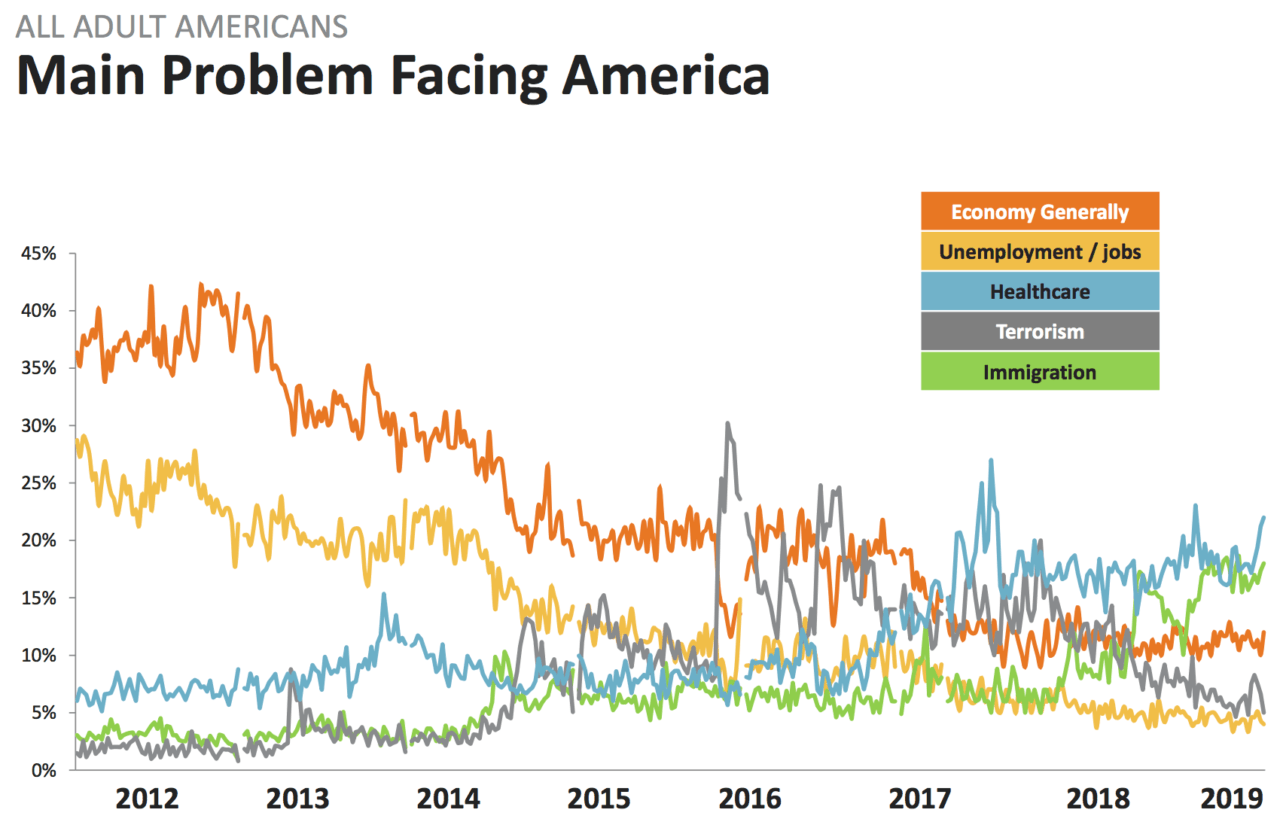 Most recent Pew Research Center polling reveals that deporting illegal aliens from the U.S. is the top priority among Republican voters, outpacing issues like avoiding tax increases and reducing the national debt.

About 65 percent of GOP voters told Pew Research Center that the highest priority of the Republican Party should be ending illegal immigration and reducing the illegal alien population currently living in the U.S.

Mass illegal and unchecked immigration to the country has stagnated U.S. wages for decades while redistributing the wealth of America’s working and middle class to higher income earners.

At current rates, illegal immigration is projected to reach about 1.28 million southern border apprehensions this calendar year — more than every fiscal year of Obama and Bush. Similarly, at current levels, nearly one million migrant children could enter the country before the 2020 election with potentially 80 percent enrolling in public schools around the U.S. by next year’s school year.

Skyrocketing illegal immigration at the U.S.-Mexico border has not only strained public resources but could choke four percent wage hikes that President Trump has delivered to America’s blue collar and working class.

Experts like former Secretary of State Kris Kobach have warned that if illegal immigration levels continue to rise over this year and throughout 2020, the four percent wage hikes President Trump was able to deliver to America’s blue collar and working class could be depleted by a saturated labor market with more cheap, foreign workers competing against Americans.

Every year, the U.S. admits more than 1.5 million illegal and legal immigrants, with more than 70 percent arriving through the process known as “chain migration,” whereby newly naturalized citizens can bring an unlimited number of foreign relatives to the country. In 2017, the foreign-born population reached a record high of 44.5 million. By 2023, the Center for Immigration Studies estimates that the legal and illegal immigrant population of the U.S. will make up nearly 15 percent of the entire U.S. population.