A Korean immigrant is suing chip-maker Intel Corp. for allegedly allowing its imported Indian managers to illegally favor the hiring and promotion of Indian job seekers.

Hoseong Ryu is a Korean who became a U.S. citizen in 2009, and “throughout the course of his employment, Ryu has worked in an environment with management that favors employees who are from India or are of Indian or South-Asian descent and disfavors employees who do not fall into that category,” says the California lawsuit, filed by the Alexander Krakow firm.

“Intel’s actions against Ryu occurred under circumstances that give rise to a reasonable inference of discrimination” based on racial and national origin, the lawsuit says.

The lawsuit comes as a growing number of Americans and legal immigrants argue that Indian managers and recruiters are excluding young and experienced Americans from jobs in the nation’s software industries.

The evidence of routine discrimination is piling up amid multiple lawsuits, testimony from sidelined Americans, and statements from Indians.

“I have had 4 on-site interviews since being laid off and interviews with 18 people during those interviews,” a U.S. graduate told Breitbart News September 30. “A full 13 of them appeared to have been born in India and only one seemed to be likely U.S. born. That may have been partially bad luck … Still, it seems to point out a risk of one nationality getting too high a representation in the hiring process,” he added.

These concerns were spiked during the charged debate this month over Sen. Mike Lee’s pending S.386 bill, which would fast-track at least 300,000 Indian visa-workers towards green cards and permanent U.S technology jobs — including management and recruiting jobs.

The plaintiff in the Intel lawsuit, Ryu, moved to the United States in 1996 and became a citizen in 2009.

The lawsuit began by describing Ryu’s hiring interview, where the one Indian on the three-man hiring panel allegedly argued for his rejection, and the hiring of an generic Indian. According to the lawsuit:

19. Former Senior Firmware Engineer Ravi Gopalan, who is of Indian descent and was a member of the management of Ryu’s team, openly favored the hiring and promotion of only employees from India. Gopalan’s stated rationale was that “Indians work hard” and “Indians are harder workers.” Gopalan also encouraged Ryu’s former supervisor, Peter Bisgaard, to hire only Indian employees.

20. Throughout Ryu’s tenure, management of the System Integration Team, which is primarily composed of managers from India, has openly shown favoritism toward employees from India or of Indian or south-Asian descent regarding the use of vacation and leave. Most employees who are not Indian or south-Asian receive only two to three weeks of vacation or leave per year. But employees who are originally from India or of Indian descent typically receive additional leave time and sometimes receive as much as five or six weeks of leave per year.

21. In or about December 2017, Ryu met with then Joint Team Manager of the System Integration Team Srikanth Amaraneni (who is originally from India).

24. On or about February 9, 2018, Intel named Ramesh Kondru (who is from India) as Manager of the System Integration Team. This position was a promotion for Kondru. Kondru had previously worked as a system debugger. By contrast, Ryu had worked as an integration engineer and had served as a de facto manager of the team for about 18 months prior to Kondru’s promotion. Ryu had also established the System Integration live test rack for Intel in the United States. By contrast, Kondru had no management experience and had significantly less experience with system integration than Ryu.

26. On or about March 2, 2018, Ryu initiated an internal Open Door Investigation at Intel in which he alleged that his non-promotion in favor of Kondru was retaliation by Amaraneni based upon a previous complaint to Human Resources about Amaraneni. Intel’s Open Door Investigation was inconclusive and revealed that the job had been offered exclusively to Kondru.

Intel did not respond to emails from Breitbart News.

Since 2016, Intel has asked the government for 6,500 more H-1B workers, according to MyVisaJobs.com. Intel has also asked for 3,000 green cards for H-1B and other visa-workers who are already employed at Intel, according to federal data collected by the site. 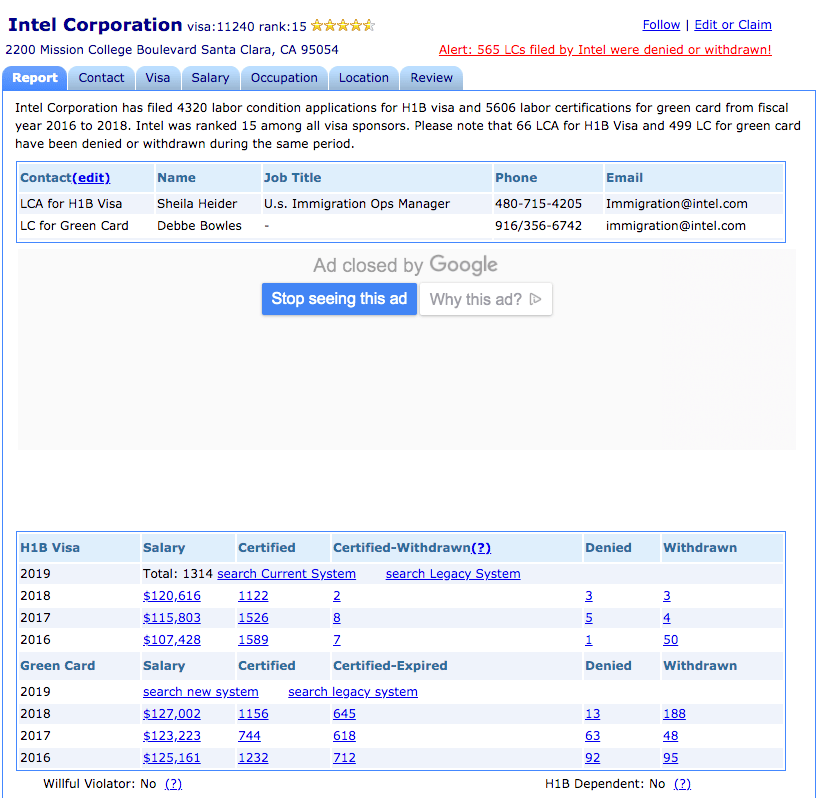 The claim of discrimination echoes a  September 9 lawsuit filed by Kotchen & Low in San Jose, California. The suit was filed on behalf of an American who was allegedly belittled and sidelined by Indian managers at an U.S.-based Indian company, named Happiest Minds. The lawsuit says:

On information and belief, both Happiest Minds’ internal recruiters and its third-party recruiters give preference to locating and recruiting South Asian and Indian candidates, who are then given preference throughout the hiring process

Americans are also fired at higher rates by the company’s executives, says the lawsuit:

Overall, at least 1.4 million foreign graduates hold U.S. white-collar jobs using the visas and work permits. This population is far larger than the 800,000 Americans who graduated from college in 2018 with degrees in healthcare, business, accounting, engineering, science, software, math, or architecture.

Many of the Indians are employed by U.S.-based companies who are in long-term outsourcing contracts with brand-name companies in the Internet, retail, banking, insurance, travel, design, healthcare, and accounting sectors. The contracts are part of the U.S.-Indian Outsourcing Economy, which has uses the U.S.-based visa-workers to send at least 2 million additional U.S. white-collar jobs to cheap Indian workers in India.

The outsourcing economy is strongly supported by India’s government, which treat Indian visa-workers in the United States as a national asset.

DHS exposes trafficking of Indian graduates to US jobs via B1 & H-1B visas. Smuggled B1s are paid Indian wages so they help Indian CEOs grab white-collar jobs from US grads & companies. Crappy jobs for you & your kids if @SenMikeLee's @S386 becomes law. https://t.co/xfsR99hn3O

Many of the Indian employers and managers reportedly run their U.S. worksites using Indian ideas and social norms — such as the idea of an ingrained “caste” hierarchy — regardless of U.S. laws against nepotism, bribery, and national, racial, and sexual discrimination. Visa-workers and Americans repeatedly say that the Indian managers also discriminate against Indians who are not from the Indian managers’ extended families or home regions, such as Andhra Pradesh and Telangana.

Indian managers and recruiters can be rewarded informally to steer new jobs to Indians instead of Americans because they are tied together by their close ties to the Indian economy and to other Indians in the Indian communities in the United States.

Follow Neil Munro on Twitter at NeilMunroDC, create an alert for “Neil Munro, immigration,” or email the author at NMunro@Breitbart.com