The Department of Justice (DOJ) has quietly told the Supreme Court that it does not have the legal authority to issue work permits to Deferred Action for Childhood Arrivals (DACA) migrants and has effectively invited the court to block the annual award of more than one million work permits to migrants.

“If the [judges] make a decision, it would have a huge impact,” said John Miano, a lawyer who is seeking to end two of the many work-permit programs. Prior presidents created the two programs, which allow U.S. companies and Indian managers in the United States to annually hire roughly 150,000 Indians for technology jobs sought by American graduates.

The invite is on page 19 of a “Reply Brief” that DOJ sent to the Supreme Court on October 28. The court will hear the DACA case on November 12.

The DOJ’s brief narrows the department’s prior 2018 claim that Section 1324a of federal law allows the administration to approve an unlimited number of work permits for foreigners:

Section 1324a may have ratified extending work authorization to aliens who received deferred action on an individualized basis or pursuant to interstitial class-based deferred-action policies.

But it cannot reasonably be interpreted to have “br[ought] about [the] enormous and transformative expansion” in the Secretary’s authority that would be required to support conferring work authorization in conjunction with a deferred-action policy like DACA.

The “may have ratified” admission is a huge step back from a 2018 plea where the solicitor general wrote that the 1324a section permits:

pre-existing DHS regulations [to] allow all deferred-action recipients to apply for employment authorization, enabling them to work legally and pay taxes. 8 U.S.C. § 1324a(h)(3) (empowering the Executive Branch to authorize the employment of noncitizens).

The new DOJ language threatens the many administration programs, which award more than one million work permits each year to foreigners. If the court strikes down those programs, it will open up many technology jobs to the American graduates who are now locked out by managers’ favoritism for Indian workers.

Estb. media touts the migrants' side of the DACA debate. So Breitbart follows the $$$ to show how investors & gov't are asking SCOTUS to rescue the huge & hidden "work-permit economy" – and to quietly prevent wage raises for many millions of Americans. https://t.co/OQbcJ2AUpc

“The government has given conflicting statements on what its authority is to grant aliens employment,” said Miano, a lawyer with the Immigration Reform Law Institute. Miano’s group favors less government inflation of the annual labor supply. He continued:

The story keeps on changing whether they have the [1324a] authority to grant aliens work authority. That authority does not exist — Congress has never granted this vast authority, and even if it did, it would be unconstitutional because Congress is supposed to be the legislative body. We basically know the executive is now inventing immigration law.

A Texas appeals court blocked the 1324a work-permit claim when it blocked President Barack Obama’s 2014 Deferred Action for Parents of Americans (DAPA) amnesty for the illegal-immigrant parents of U.S.-born children. The Texas court said:

For the authority to implement DAPA, the government relies in part on 8 U.S.C. § 1324a(h)(3), a provision that does not mention lawful presence or deferred action, and that is listed as a “[m]iscellaneous” definitional provision expressly limited to § 1324a, a section concerning the “Unlawful employment of aliens”—an exceedingly unlikely place to find authorization for DAPA.

The Supreme Court’s DACA decision could settle the work-permit issue, especially if the judges recognize the weak legal claim, which justified the award of work permits to the DACA illegals, Miano said.

The work programs were created or expanded by officials working for President George W. Bush and Obama.

For example, Bush’s secretary for the Department of Homeland Security (DHS) expanded the Optional Practical Training (OPT) program, which allows hundreds of thousands of foreign students to get work permits by enrolling in U.S. colleges and universities.

The OPT program and the companion Curricular Practical Training (CPT) program ballooned to 430,000 active work permits in 2017. That army includes tens of thousands of foreign graduates who were invited by Indians managers to take jobs at prestigious U.S. firms — so cheating children of the U.S. professional class. The minimal coverage of the OPT labor inflow by the established media program also helps to hide the massive scale of OPT fraud.

Most of the roughly 100,000 H4 EADs have been given to Indian spouses, allowing them to be hired by Indian managers — even when Americans are seeking the same jobs. The program worsens job competition for U.S. tech professionals, a federal court decided November 8.

In 2018, at least 1.97 million work permits — most lasting one year  — were issued to foreigners, according to data provided by DHS. The wave of work permits was issued via a diversity of mandatory and discretionary programs directed by Congress — but also by many programs justified by the 1324a claim. The huge total provides roughly two work permit workers for every four Americans who turned 18 that year.

The work permit total does not include at least 150,000 new visa workers each year, including the 100,000 new H-1B workers who joined the existing population of roughly 750,000 H-1B workers. 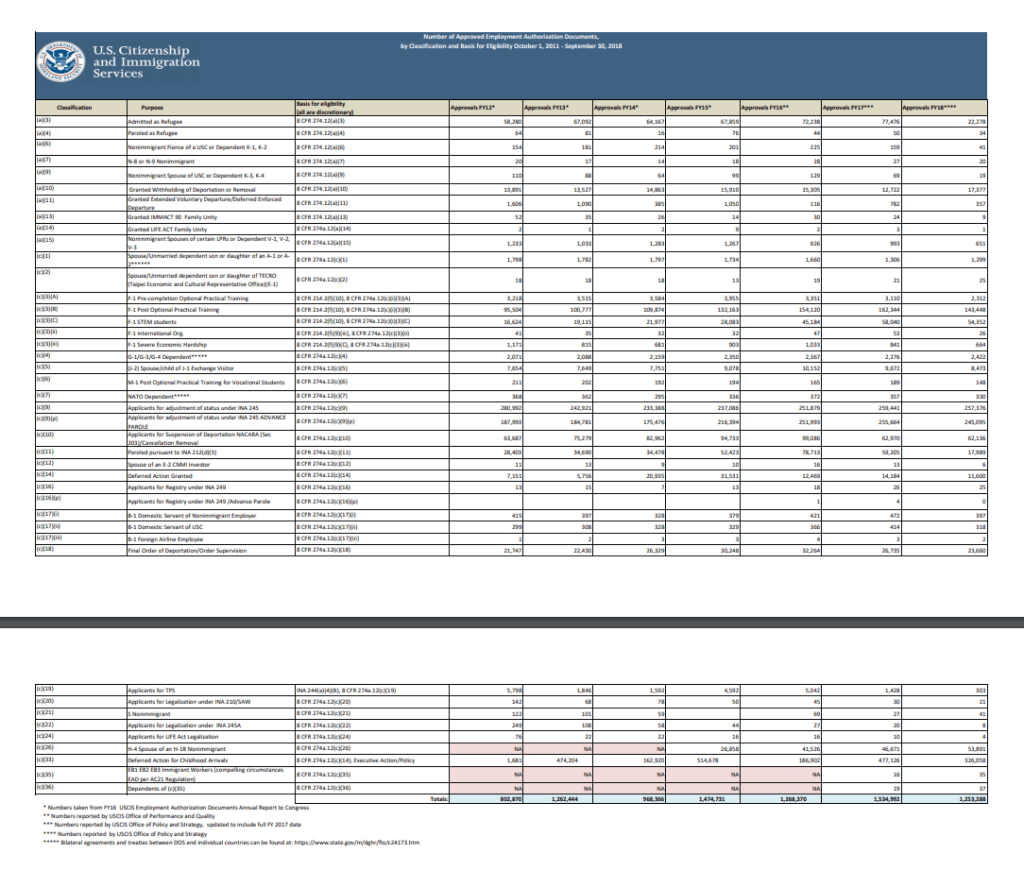 The courts are reluctant to protect Americans employees from the flow of cheap overseas workers, Miano said. For example, he has been fighting to overturn the OPT program for more than ten years, but the cases have been passed back and forth by various judges, he said. In his H4 EAD case, Miano just won an appeal that sends the case back to a judge to decide if the 1324a section allowed Obama’s officials to create the H4 EAD program.

Business groups have fought against every effort to reduce the inflow of foreign workers into Americans’ jobs. For example, a group of companies sent a letter to DHS on November 8 protesting a proposal to delay the award of work permits to Central American migrants. Reuters reported the business groups’ demand:

“We are concerned that the proposed rule would hurt our ability to attract and retain talent,” they wrote. “Many of the undersigned companies already have asylum seekers in our workforce and many will have need to hire members of this population in the months ahead.”

Christopher Miller, an activism manager with Ben & Jerry’s, said in a statement that the company opposed the fee changes. “These policies are disappointing but not surprising from an administration that is doing everything it can to build walls and keep people out,” he said.

The Reuters article did not mention the corporations’ interest in cheap labor or the migrants’ impact on American employees and their families.

In 2017, roughly 400,000 border-crossing migrants got work permits. The flood of new workers helps to suppress wages for Americans, boost revenue for real estate investors, and spur sales by retail companies. The letter was sent by Ben & Jerry’s, DoorDash, Airbnb, Chobani, Western Union, and several other companies.

The potential loss of the OPT and CPT programs is a big issue for the investors who formed FWD.us. The investors gain higher stock values because the program inflates the supply of workers, renters, and consumers. In a November 5 post denouncing criticism of the OPT program, FWD.us wrote:

Optional Practical Training (OPT) allows graduates to gain valuable hands-on experience and begin contributing their education and training to the U.S. immediately. Without OPT, most international graduates would have no choice but to leave the U.S. and contribute their skills to our global competitors. Protecting the option of OPT for international graduates is critical to attracting, educating and retaining promising talent from around the world.

The loss of foreign labor would sharpen employers’ competition for U.S. graduates and blue-collar workers, so boosting salaries and opportunities for Americans.

Here's 5 things you should know about Optional Practical Training #OPT, a program that allows international students to gain valuable hands-on work experience in their field of study after graduating from US colleges and universities.
https://t.co/sDZKXL9Yr2

Miano laughed when the FWD.us post was pointed out to him. “They’re scared that we’re reaching the endgame in the [OPT and H4 EAD] lawsuits,” he said, adding that FWD’s prior silence showed “they did not want to give credibility to them.”

FWD.us is helping to fund a media campaign and demonstrations that feature attractive DACA migrants. That sentimental bait has been snapped up by reporters around the country, so helping them avoid covering DACA’s huge economic redistribution from American workers to investors and their migrant workers.

Todd Schulte, the executive director of FWD.us, declined to respond to Breitbart News.

The OPT program was expanded in 2008 by Bush’s DHS secretary, Michael Chertoff, according to Miano:

Microsoft proposed this scheme to the Homeland Security Secretary Michael Chertoff at a dinner party at the home of the owner of the Washington Nationals baseball team. (See pp. 229-230 in my book Sold Out, co-authored with Michelle Malkin.) From there, DHS worked in absolute secrecy with industry lobbyists to craft regulations implementing Microsoft’s plan.

In a classic example of Washington cronyism, the first notice that DHS was even considering such regulations came when they were promulgated as a fait accompli, without notice and comment, on April 8, 2008 (73 Fed. Reg. 18,944).

Microsoft’s founder, Bill Gates, is one of the founders of FWD.us, along with Brad Smith, Mark Zuckerberg, and a host of other wealthy West Coast investors.

The company has joined the DACA lawsuit to protects its access to imported workers, according to an article co-written by Smith, now Microsoft’s president:

Microsoft aims to make technology that empowers every person on the planet, and to do that, we need to better reflect the world we seek to serve. Our innovations thrive on diverse voices, experiences and perspectives. Attracting and retaining talented people from all over the country and the world helps our company and our economy grow.

One of our Microsoft employees came to this country when he was only 4 months old. He has never known a home other than the United States. He earned a bachelor’s degree in computer science from California Polytechnic State University. Today, he works on one of the most important products that we create — our cloud computing service, Microsoft Azure.

Microsoft and Princeton’s challenge to the federal government’s termination of DACA is part of our institutions’ long-standing support of sound immigration policies. In a world where talent is mobile, we need to do everything we can to ensure that those who want to contribute and innovate are welcome here in the United States.