Those who relish the unyielding power of the state over the individual have had a good year. Lockdowns by tyrannical governors and state and local bureaucrats, along with expansive authority seized out of thin air by the CDC and other arms of the federal government, have made America almost unrecognizable as a bastion of freedom.

Local public schools, once trusted unequivocally by parents, have revealed themselves not only as just another arm of the government, but one controlled by teachers’ unions doing the bidding of one political party. Lockdowns and mask and vaccination mandates have been enacted against the wishes of many parents.

Yes, the statists have had a good run. But the backlash has arrived. Americans are renewing their distrust of government in a manner reminiscent of the founders. And who could blame them?

The government agencies (NIH, FDA, CDC, etc.) have proven to be shockingly incompetent and inconsistent, while unflinching in their authoritarianism. It would be comical if it were not so tragic.

First, they fostered denial and then hysteria. Then they made all sorts of promises and assurances, some of which has panned out, but others have not as goalposts have been moved time and again.

Then there was collusion between the government and Big Tech to censor all but the approved government talking points. Emails were exposed that seemed to indicate that Dr. Anthony Fauci and Facebook founder Mark Zuckerberg were colluding to control public discussion on COVID-19. Millions of Americans have been deeply disturbed by the censorship of their social media posts.

They then threatened and tied the hands of doctors who were doing their best to treat patients. And if all of this were not reason enough for Americans to lose trust in their government, we have now learned that the U.S. government provided funding that might have led to the creation of this virus in a Chinese lab.

Tyrannical state authorities and local health departments have grabbed authority with the gusto of the Gestapo. They have closed churches and threatened pastors across the nation. Last November, American Constitutional Rights Union assisted Dr. Dennis Jackman at Community United Methodist Church in Anne Arundel County Maryland when he received a citation for not wearing a mask while alone in his church and he was threatened with church closure and possible jail time. 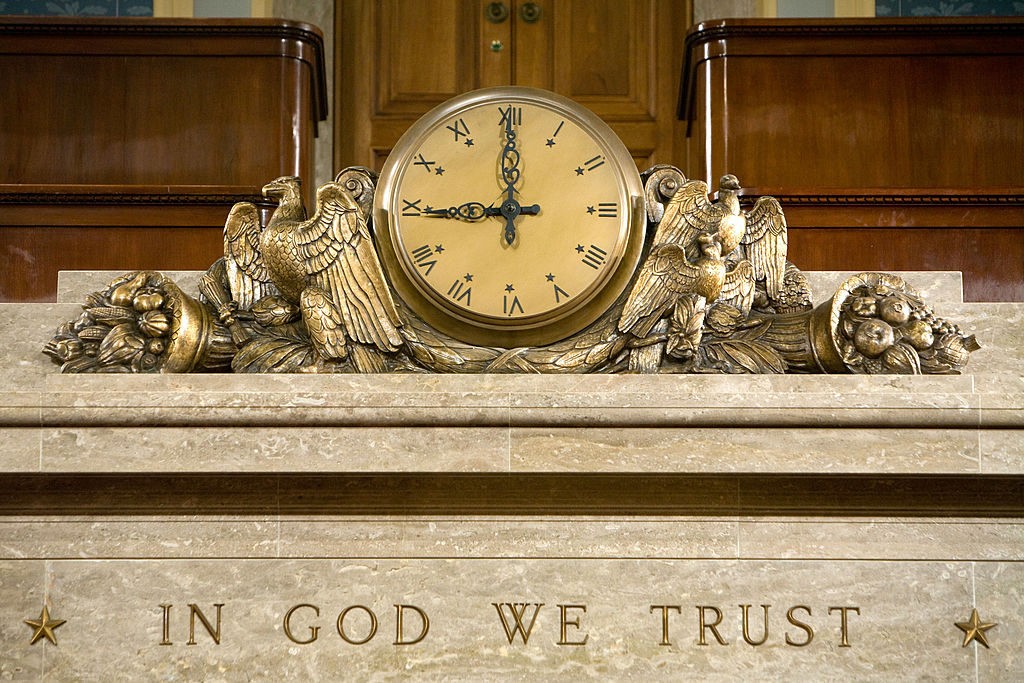 A clock bearing the affirmation “In God We Trust” stands proudly over the Speaker’s rostrum in the U.S. House of Representatives chamber. (Brendan Hoffman/Getty Images)

A recent victory for a church that fought California and Los Angeles County for the right to conduct in person worship has shown the tide is turning. The officials who had threatened to jail the pastor, Dr. John MacArthur, have been given a resounding slap down.

Grace Community Church of Sun Valley will receive $800,000 from the state and county to cover the legal costs of their challenge for religious freedom. This and other settlements have been made possible by the Supreme Court’s ruling against California’s church lockdowns.

And the recall of California Governor Gavin Newsom is one more indicator of the rebellion of the American people against tyranny and incompetence at the highest levels.

The tide is also turning in public schools. A wave of parent activism has swept over the country leading to heated school board meetings and a rise in homeschooling. For many parents, the pandemic exposed the indoctrination of their children through Critical Race Theory and politically charged lessons. Mask mandates were then the tipping point.

The rate of homeschooling in America doubled in just six months in 2020 from 5.4% to 11% and the homeschooling rate for black students rose most dramatically from 3.3% to 16.1%.  Predictably, this has led to calls by the Left to ban homeschooling; however, this movement has gained fervor that will likely not dissipate.

The nation is quickly being divided. But not as the Left intends. The Left strategically fosters division to advance their agenda of bigger government and less personal freedom. But this time, it appears to be backfiring.

Thomas Jefferson once said, “…under pretence of governing they have divided their nations into two classes, wolves and sheep.”

For the last year and a half, it appeared that the wolves had complete control of the sheep. That is changing.

The American concept of liberty is rooted in resistance to government actions that threaten that liberty.

In the words of Thomas Jefferson in a letter to Abigail Adams in 1787: “The spirit of resistance to government is so valuable on certain occasions that I wish it to be always kept alive. It will often be exercised when wrong, but better so than not to be exercised at all.”