Infighting continues to consume congressional Democrats as the House nears a vote on Thursday to pass the $1.2 “bipartisan” infrastructure bill.

The infighting has pitted the radical left against more moderate Democrats who want a legislative win they can tout heading into the 2022 midterms. But the radical left House members are opposed to the $1.2 trillion bill because it would release leverage they have to pass the massive $3.5 trillion partisan reconciliation package.

Rep. Ilhan Omar (D-MN) and Rep. Pramila Jayapal (D-WA) are leading the charge against passing the $1.2 trillion bill until the reconciliation package is passed by the House and into law.

“The bills are linked. And they have to be linked in order for anything to pass the House,” Omar told reporters Monday.

“Until that happens, there aren’t the votes for the infrastructure bill,” Jayapal said after Monday’s Democrat Caucus meeting with House Speaker Nancy Pelosi (D-CA). “We are going to vote for both bills after the reconciliation bill is done.” 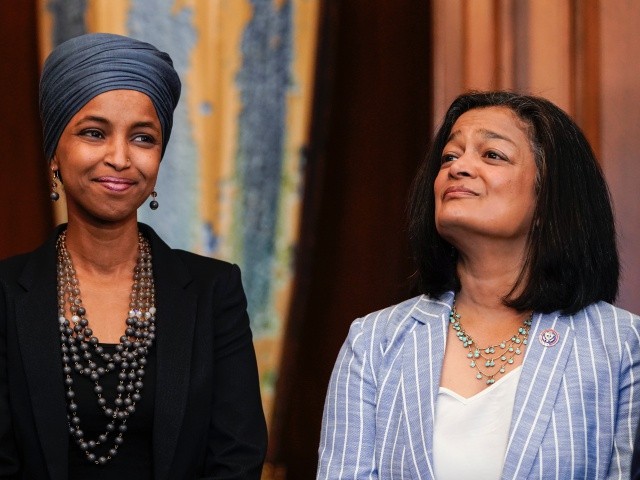 WASHINGTON, DC – JUNE 17: Reps. Ilhan Omar (D-MI) and Pramila Jayapal (D-WA) listen as Speaker of the House Nancy Pelosi (D-CA) holds a bill enrollment signing ceremony for the Juneteenth National Independence Day Act on June 17, 2021 on Capitol Hill in Washington, DC. Juneteenth, celebrated on June 19th, commemorates the of the end of slavery in the United States and will be celebrated as a national holiday. (Photo by Joshua Roberts/Getty Images)

Pelosi has tried to calm the radical left’s passion by explaining the reconciliation package is not ready for the House to hold a vote.

“We had to accommodate the changes that were being necessitated,” Pelosi reportedly told members. “And we cannot be ready to say until the Senate passed the bill, we can’t do BIF [bipartisan infrastructure deal].”

Pelosi also reportedly said the reconciliation package is being held up in the Senate, where the budget for the massive tax and spend bill is still undefined. “[W]e’re still waiting for the number because you cannot prove the design on the legislation without the number,” Pelosi said to the caucus. “And the president is working on that piece. He’s working on that piece.”

Moderate House Democrats, meanwhile, are skeptical the reconciliation package will be completed. 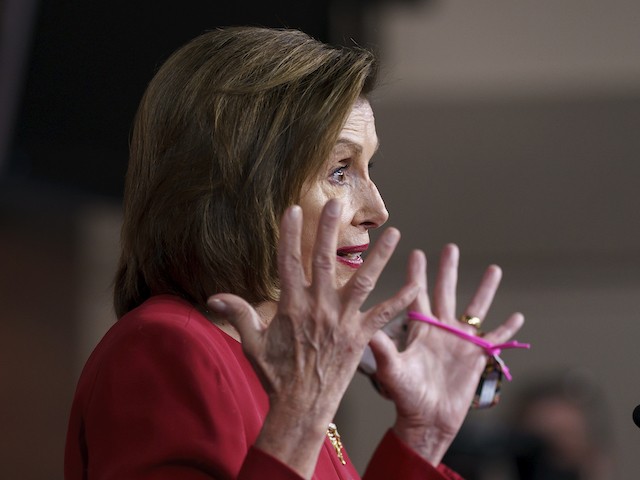 Speaker of the House Nancy Pelosi (D-CA) meets with reporters to discuss President Joe Biden’s domestic agenda including passing a bipartisan infrastructure bill and pushing through a Democrats-only expansion of the social safety net, the at the Capitol in Washington, Sept. 8, 2021. (AP Photo/J. Scott Applewhite)

“The Senate’s not going to go along with $3.5 trillion,” Rep. Steve Cohen (D-TN) said after the caucus meeting. “We don’t need to sacrifice our transportation infrastructure bill on something that the Senate may never come to an agreement on.”

Rep. Hakeem Jeffries (D-NY) also blamed Democrat Senators for withholding the “clarity” as to what will be included within the reconciliation package. “What’s holding everything up are a few senators who aren’t providing us with any clarity as to where they ultimately will land,” said Jeffries.

But there is some optimism among the party. Rep. Elissa Slotkin (D-MI) told reporters she feels better about the chances of passing the “bipartisan” deal. “I feel more confident now that it will pass,” she said. “But God forbid it didn’t, we’d have a real problem.”