Rep. Elise Stefanik (R-NY) asserted on Wednesday that House Speaker Nancy Pelosi (D-CA) shared blame for the riot that occurred on January 6 at the U.S. Capitol.

Stefanik, who serves as House GOP Conference chair, released a statement on the eve of the Capitol breach’s anniversary, thanking law enforcement for their work to control the riotous behavior but condemning Pelosi for ultimately being the one “responsible” for leaving the Capitol prone to attack.

The New York Republican called it “unacceptable” that despite Pelosi’s nine-person investigatory committee — comprising seven Democrats and two of the most outspoken Never Trump Republicans in Congress, Reps. Liz Cheney (R-WY) and Adam Kinzinger (R-IL) — persisting with its probe into the riot, “one year later the American people still do not have answers as to why the Capitol was left so vulnerable.”

“Rather than focusing on improving the security of the Capitol and adopting all the recommendations from the U.S. Capitol Police, Nancy Pelosi and House Democrats are instead using their illegitimate partisan sham of a committee to shred Constitutional precedent and punish their political opponents,” Stefanik said in reference to the committee targeting former President Donald Trump and dozens of his closest allies with subpoenas.

Stefanik led a call with reporters on Monday in which she and three others, Reps. Jim Jordan (R-OH), Jim Banks (R-IN), and Rodney Davis (R-IL), emphasized their stance that Pelosi’s January 6 committee is in fact a “cover-up” for Pelosi’s own transgressions.

They pointed to a letter Davis, the House Administration Committee ranking member, sent to Pelosi on Monday in which he accused the speaker of obstructing records related to security preparedness of the Capitol from the Sergeant-at-Arms, the Chief Administrative Officer, and the House General Counsel, all of whom, Davis said, report to Pelosi.

Stefanik on Wednesday also reiterated that the January 6 committee has essentially deemed Pelosi exempt from blame for the riot, despite Pelosi’s history of overseeing security-related actions of the Capitol like installing magnetometers, holding a briefing on security preparedness ahead of a September 18 rally, and limiting Capitol visitation because of coronavirus.

January 6 committee chair Rep. Bennie Thompson (D-MS) went so far as to say as much in a CNN interview last July. “Well, if you look at the charge that we have in the resolution, it says the facts and circumstances around January 6. I don’t see the speaker being part and parcel to that,” Thompson had said.

Stefanik declared in her statement Wednesday, “The American people deserve to know that the ONLY office that is off limits to this investigation is the Speaker’s office.” 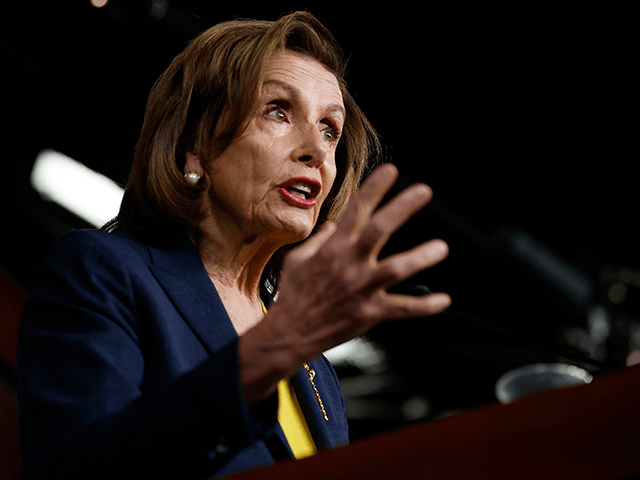 Speaker of the House Nancy Pelosi (D-CA) talks to reporters during her weekly news conference in the U.S. Capitol Visitors Center on December 15, 2021, in Washington, DC. (Photo by Chip Somodevilla/Getty Images)

“The fact is that Nancy Pelosi bears responsibility as Speaker of the House for leaving the Capitol so vulnerable despite multiple warnings and requests, and now she is responsible for the cover-up of that fact,” Stefanik concluded.

Stefanik’s office confirmed to Breitbart News that the Republican congresswoman, who serves in the 21st District in the North Country region of New York, would be spending January 6 in her district holding a roundtable with local law enforcement members.

Similarly, Jordan’s office said Jordan, too, would be in his district in Ohio “meeting with local police and business owners who have been impacted by Joe Biden’s rising crime wave and failing economy.”

Meanwhile, Pelosi has arranged for several events in D.C. for the anniversary, including hearing testimonials about the riot and holding a prayer vigil, according to a letter she sent around to her Democrat colleagues.