Check this out. It’s a passage from a 2002 book by Dan Savage, in which the left-wing firebrand recounts his experience blasting at a picture of Osama Bin Laden at a shooting range. 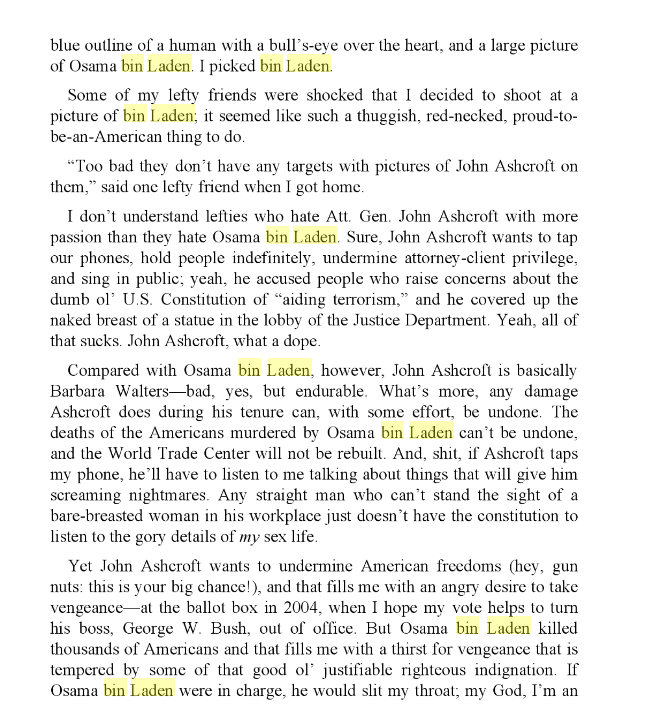 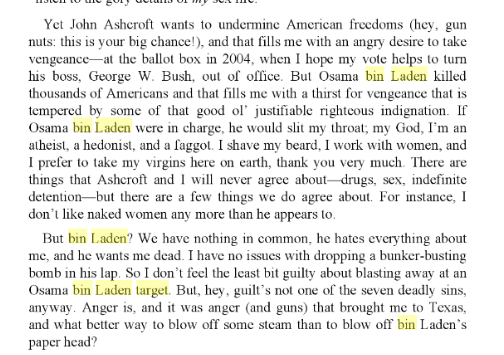 Savage later created a website, “santorum.com,” which promoted the definition. At one point, it passed the socially conservative senator’s own site in Google’s search rankings. Savage promised to take the site down if the senator donated $5 million to the Freedom To Marry campaign.

As you might expect, I don’t have a lot in common with Dan Savage, who hates right-wingers with a passion. His frequent attacks on Christian conservatives, including his Santorum prank, are childish and whiny.

Yet, for a while at least, he was consistent. If the passage above is to be believed, he was once aware that Muslims hate gays with a passion that far exceeds anything the Christian right has ever thrown at us. So what happened? Why isn’t he at the forefront of anti-Islam activities today? Why isn’t he joining forces with Pamela Geller, or Geert Wilders, or me?

And why, after the Orlando shootings, did he go after “gun culture” and “religiosity” instead of the obvious culprit — Islam?

Shattered this morning by news out of Orlando. Ban assault weapons, fight hatred, don't succumb to fear or to demagogues.

In fact, Savage did more than that. He began retweeting the inane #IamOmarMateen hashtag, where leftwingers were posting pictures comparing American conservatives and Christians to the Orlando shooter.

You gotta love in the face of hate but I'm gonna be real nasty for a few days first. #IAmOmarMateen #WeAreOrlando pic.twitter.com/YgzwPRhzyn

Not once did Savage condemn Islam. Not once did he show the same kind of consistency and courage that he did in 2002.

In fact, searching Twitter for tweets from Dan Savage about Islam, I found only three — since 2012. In contrast, he’s tweeted hundreds of times about guns, never positively.

It’s a question I’d like to pose to the entire gay left, frankly.