Ski-mask clad protesters at MILO’s event at West Virginia University who identified themselves as “communists” set off fire alarms in a failed attempt to silence The Dangerous Faggot.

Balaclava masked protesters chanted “Nazi” outside MILO’s event, to which MILO said “they’re wearing balaclavas, oh they’re trying to look black for me!” referencing MILO’s well known love of black men. The mob of protesters were promptly turned away by security and were unable to enter the lecture hall.

Daring to venture outside to meet the angry mob, MILO returned to the function hall triumphant, holding a large sign. “Like a broken clock, even leftists are right every now and then,” said MILO opening the large sign which read “MILO SUCKS” and holding it above his head. Within minutes the protesters had pulled a fire alarm, in another attempt to disrupt the Dangerous Faggot’s event. 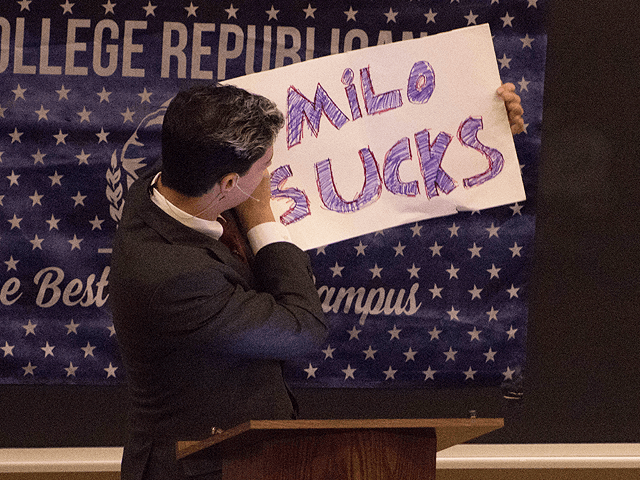 “They’ve pulled the fire alarm! Good heavens! They’re just trying to tell me I’m hot, I know!” said MILO. Refusing to back down, “Well we’re staying aren’t we? No, we’re not going anywhere!. This is what the left does when they can’t win arguments with facts, they use fire alarms!.”

“Unlike other conservative speakers, I will not be ejected from my room because some idiot outside has pulled the fire alarm, lets get through it!” shouted MILO above the siren sound of the fire alarm.

Watch the full event below.