The tweets displayed below are only a sampling of the threats sent to conservative campus activists Ariana Rowlands and Kassy Dillon have received. Although those responsible have been repeatedly reported to Twitter, no action has been taken.

Kassy Dillon, the President of the Mt. Holyoke College Republicans who has also written for Breitbart, has been bombarded with threats from left-wingers angry at her conservative commentary and defence of Milo Yiannopoulos in the wake of his Twitter suspension.

A user who posted a Twitter poll calling for the death of Mt. Holyoke student Kassy Dillon, received no punitive actions from Twitter. In addition, a user who sent Dillon an unsolicited “sext” via Twitter’s direct message system has yet to have his account sanctioned. 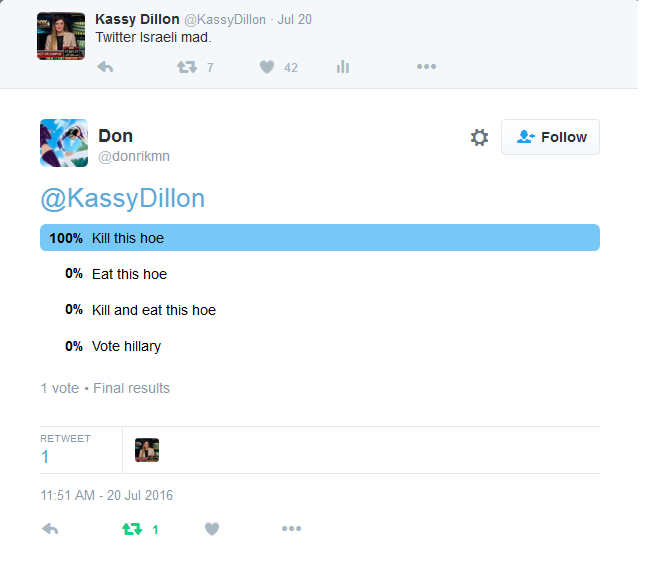 Just sent you a flaccid picture of my dick in the DMs. God bless @KassyDillon

Despite being reported to Twitter by both Dillon and her followers, the social network, which leaped to ban Breitbart editor Milo Yiannopoulos for being mean to a Ghostbusters actress, has yet to take action.

is the account who threatened you still up? I reported it twice. Jack's on here trying to defend himself.

Ariana Rowlands, president of the UC Irvine College Republicans and former guest on the Milo Yiannopoulos Show has a similar story. She has been repeatedly threatened by a Twitter user, who has been reported to Twitter by both her and her followers — yet the social network has taken no action.

Because the individual threatening Rowlands attends her university, a police report has been filed with the UC Irvine Police Department. Despite the police report, Twitter has yet to warn, suspend, or terminate the account.

Mayb next time u won't be so lucky ὄ for someone who talks shit about safe spaces, u sure did have a lot of security https://t.co/xRlnI50eUp

I didn't. I just think u should be thankful I didn't swing on none of y'all lmfao

shut the fuck up u sad excuse for human life drink bleach https://t.co/KiLL6yrztl

(UDPDATE: Jose Santacruz has made his account private, causing the above tweets to be rendered inaccessible. Twitter has still not suspended him.)

Twitter’s lack of response to death threats and harassment against conservative activists will bolster claims that it does not enforce its terms of service evenly. In the wake of the murder of policemen by black activists in Dallas and Baton Rouge earlier this month, the platform also tolerated a flood of tweets from Black Lives Matter supporters calling for more violence against the police.

Twitter also allowed death threats against Republican senators to remain on the platform for weeks before taking action. Given what the platform tolerates, it’s little wonder that they haven’t banned Ghostbusters actress Leslie Jones, who openly incites her fans to attack other users and repeatedly makes racist tweets.

Tom Ciccotta is a classical liberal who writes about Free Speech and Intellectual Diversity for Breitbart. You can follow him on Twitter @tciccotta or email him at tciccotta@breitbart.com