In yet another example of leftists attempting to silence those on the right, a group of conservative comic book creators are being targeted by social justice warriors.

A group of comic book creators has begun dealing with an issue seen in many other industries — the silencing of conservative voices simply for being conservative. Brett R. Smith, Jon Malin and Richard Meyer (better known by his YouTube handle Diversity and Comics) recently announced a new graphic novel titled Jawbreakers. The graphic novel is written by Meyer, drawn by Malin and colored by Smith, and is actually not a political comic book.

The plot is described as “A team of ex-superheroes attempt to save a “monster” from a vicious warlord who wants to exploit it!” The team of comic creators took to crowdfunding platform IndieGoGo to gain financing for the graphic novel and have currently raised $261,509 from comic book fans eager to read the new novel. Malin and Smith are both veterans of the comic book industry having worked for the “big two” companies, Marvel and DC, while Meyer has gained a large following online for his critical reviews of modern graphic novels and comics.

Smith has previously worked on conservative graphic novels and books such as Clinton Cash and Thump: The First Bundred Days, Meyer has been a vocal critic of what he feels is forced political correctness within current popular comic series while Malin hasn’t openly stated his political views but has criticized social justice warriors in the comic book industry referring to them as “Nazis.”

X-Men are closer to Jews in SJW Hitler's Germany fighting for freedom because they see ideologues rising, silencing them, weaponizing hate, racism and socialism against the people they claim are the root of social ills. SJWs are not Nazis but Nazis are SJWs and X-MEN aren't SJWs. https://t.co/GlspfHMhLN

But leftists could not stand the idea that artists and writers that had criticised forced diversity in comic books could possibly publish a successful graphic novel. They made their move against the graphic novel’s publisher. Antarctic Press, a small comic book publisher, had agreed to publish Jawbreakers and were initially quite excited about the graphic novel release:

That was until Mark Waid, a Marvel and DC writer known for his work on titles such as The Flash, Captain America and Daredevil, took it upon himself to call the publisher and inform them of “who they’re getting into business with,” according to a post on Waid’s (now deleted) Facebook page: 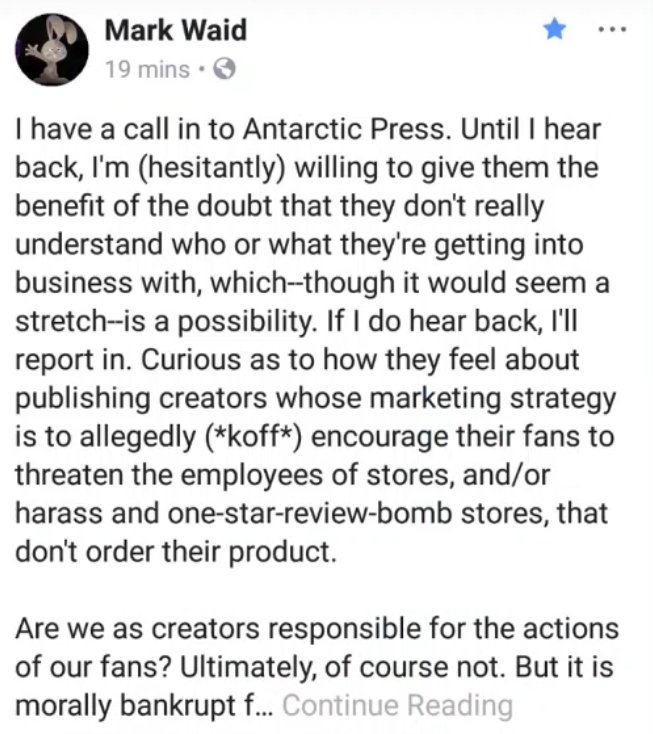 After careful consideration, it is the decision of Antarctic Press to not release the comic series Jawbreakers.

Antarctic Press is a staunch believer in Creator’s Rights and giving creators a chance to showcase their creation and allowing that creation to be judged on its merits.

Many forces, many of them should be viewed with great trepidation about how our society acts, have led us to this decision. We do not take this decision lightly as we do believe that there should be separation between “ART” and the “ARTIST” and that separation has been blurred in our decision.

We appreciate all our supporters and detractors in this process.

Thank you for taking the time to read our statement.

This statement will be removed in 7 days.

The publisher also confirmed via a Twitter post that they had been contacted by Waid shortly before their decision not to publish Jawbreakers but claimed that they were not bullied into dropping the title:

Shortly after this, Richard Meyer announced that the three comic creators behind Jawbreakers would be forming their own company to publish the graphic novel:  “We are starting our own company called Splatto Comics, Splatto del Gato Comics for legal reasons.” Meyer further described the aim of the company saying:

Splatto Comics will be obviously comic centered. That’s what we love. That’s our thing that we do. It’s going to be a variety of things. Exclusive crowd-funding campaigns, for example my Iron Sights graphic novel might only be available in IndieGoGo.

The 112 page one is exclusive. It will not be in stores in that 112 page thing. The only way you can ever get this is through this IndieGoGo. We are going to do exclusive IndieGoGo’s for something like Iron Sights probably.

Moving forward on a way to get it into brick and mortar stores like Barnes & Noble and Amazon and things like that. And then we’re also going to go for things like maybe the Jawbreakers Digest the traditional route into comic book stores through Diamond.

Breitbart News spoke to Brett R. Smith exclusively about the current situation, Smith described the need for more content to cater to the large market of conservative Americans. Smith stated:

We were able to turn Clinton Cash into a New York Times number one bestseller and I just don’t think that’s a fluke. And then you look at the reaction to Jawbreakers, there really is a huge underserved audience out there, you see that with [the TV series] Roseanne, 28 million people turning up to watch her, you see that now with Last Man Standing coming back.

Then you see it with things like American Sniper, or the Passion [of the Christ], when something is catered towards the mass majority of the country in a commercial way that doesn’t lecture, people eat it up. And it’s not that any of it is political, I get back to the fact that it’s pro-Western culture. That’s really kind of the bullseye that we need to focus on, does it advances Western culture and Western philosophies, and if it doesn’t we’re not interested in it, I don’t wanna do it.

Discussing a soon to be announced project he’s working on, Smith commented on the political correctness that has overtaken not only the comics industry, but practically every aspect of popular culture. He said, “at the same time it [the project] is not political at all, it’s just total, pure escapist entertainment which I think people are craving because that’s why we go to entertainment, is to get away from all this stuff. And yet, we’re bombarded with it, even when we turn on the football game or the TV series.”

Smith has seemingly been proven right by the success of Jawbreakers — an apolitical comic book that Smith described as an “80s throwback, Expendables” style story — in his belief that the public is craving pure escapist entertainment. In fact, Jawbreakers has beaten the sales numbers of a number of extremely popular and well-known Marvel and DC graphic novels, which have been criticized for allegedly pandering to SJWs in recent years:

Didn't plan this update but some "pros" must have missed it the first time. #Jawbreakers beat 2018 GN sales of #Avengers #Thanos #Batman #StarWars #JLA #XMen #Daredevil by #MarkWaid +more

Jawbreakers is set to be released to IndieGoGo backers in August 2018, Breitbart News will be publishing a full review of the highly anticipated independent graphic novel when it is available.