The University of Texas has placed a “toxic masculinity” project on hold after it was accused of treating masculinity as a “mental health issue.”

The update, which was initially provided by The College Fix, signals that universities are having second thoughts about pushing the pseudointellectual “toxic masculinity” notion, which purports that American men are socialized into an unhealthy, violent form of gender expression.

In a statement, the university attempted to clarify the aims of the program, claiming that it was designed as a well-meaning program that would help young men reduce their desire to commit sexual violence.

The MasculinUT program does not treat masculinity as a “mental health issue,” and any such statements are simply not accurate. It was established to bring more men to the table to address interpersonal violence, sexual assault and other issues.

Like other UT programs related to sexual assault and interpersonal violence, MasculinUT is housed administratively in the university’s Counseling and Mental Health Center. Its goals include helping men explore ways to reduce sexual violence, helping students take responsibility for their actions, and fostering healthier relationships on campus and beyond.

The original website for the “MasculinUT” program stated it was designed to “provide a framework for men and masculine-identified students to develop a gender awareness that translates into positive contributions to their relationships on campus, relationships to their friends and families, and quality of life, including career goals.”

“At the same time, this program was created as a resource and support for students who want to learn more about their masculine gender identities, including students traditionally understood as male, as well as female, transgender, genderqueer, and non-binary students who embody a diversity of masculinities,” the program’s description continues.

One poster for the program featured a male talking about wearing a dress and makeup. “Even though I’m masculine, I can wear makeup, and if I feel like wearing a dress, I can do that too and it’s totally fine,” the poster reads. 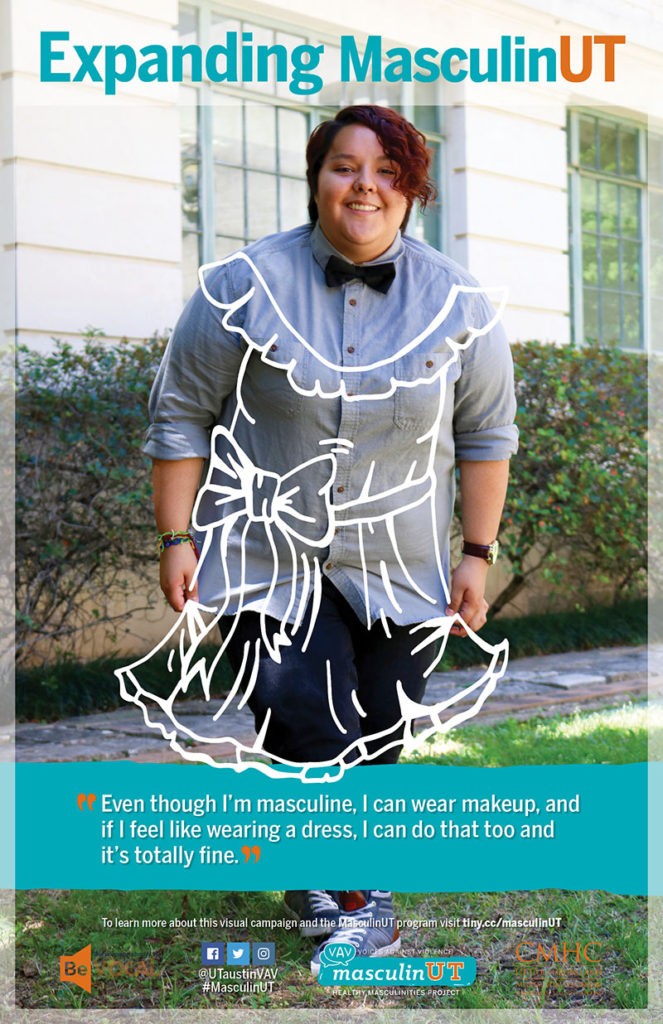 The University of Texas is just one of many universities around the country that is treating masculinity as a mental health issue. Just last week, Dickinson College Professor Crispin Sartwell argued in the Wall Street Journal that the left wants to use “conversion therapy” on those with “toxic masculinity.”

Breitbart News reported last year that a university in Canada was hosting a “toxic masculinity” confessional booth where male students were asked to come and repent. Somewhat akin to the practice of confession with the Catholic faith, the confessional allowed male students the opportunity to confess instances in which they acted with too much aggression or violence. Late last year, Breitbart News reported that men were eschewing traditional therapy in favor of classes that would teach them about healthy ways to express their masculinity.