As the election results showed Republican Karen Handel soundly beating her opponent Jon Ossoff in the special election in Georgia, CNN analysts appeared disappointed by the results before anchor Anderson Cooper cut to a break.

TFW Your Candidate Gets His Ossoff Handeled – wrote Reddit user Colonel_Falhma on The_Donald subreddit, highlighting their “SALTY TEARS” and a screenshot of the CNN moment. 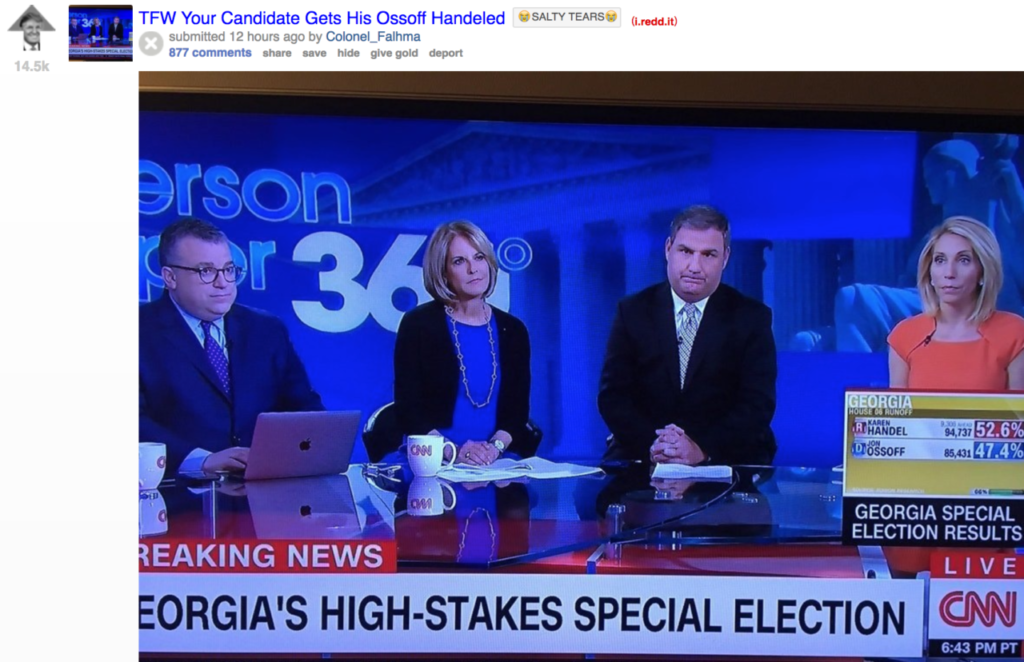 Although CNN hadn’t called the race for Handel yet, it was clear the Democrats’ candidate had lost.

Right before the moment, CNN’s Chief Political Correspondent Dana Bash pointed out that the district was one where Democrats should have been more competitive after Mitt Romney won by double digits and President Donald Trump won it by just over one percentage point.

“[I]t is wealthy, it is educated and the kind of voters that are in this district were supposed to be the kind that Democrats could pick off from the Republican,” she said, pointing out that Democrats had failed again.

The image was widely shared by Trump supporters, including some White House staff.

“Hey @CNN its like your constant conspiracy theories and hatred towards the President actually doesn’t make a difference,” wrote Turning Point USA founder Charlie Kirk in a Twitter message that was retweeted by Donald Trump Jr.

America is winning daily..Then we have this 'hot mess' of a news team with the long, sad, faces trying to cope. 👇🏼👇🏼😭👇🏼👇🏼😂@CNN pic.twitter.com/2KBSRJZ4jG

Well, nevermind, I'd be sad too if my party was 0-4 in the special elections. #GA06 pic.twitter.com/AJ5yglXtox