So what we’re talking about here, is not a group of opinion columnists or pundits. These are five people who identify, who pass themselves off as, and who are sold to us as unbiased, capital “J” journalists.

And yet, here they are, not only joyously celebrating Donald Trump’s impeachment… Oh, no, that’s not the worst of it. The worst of it is that they know the institution they work for — the corporate media — is now so corrupt, so deranged with hate, so bubbled and tribal, that it is okay to “own the Trumptards” by tweeting out a photograph of that celebration without any fear it will result in any kind of disciplinary action.

I mean, here it is… And while you gasp, keep in mind “journalism is worth paying for”: 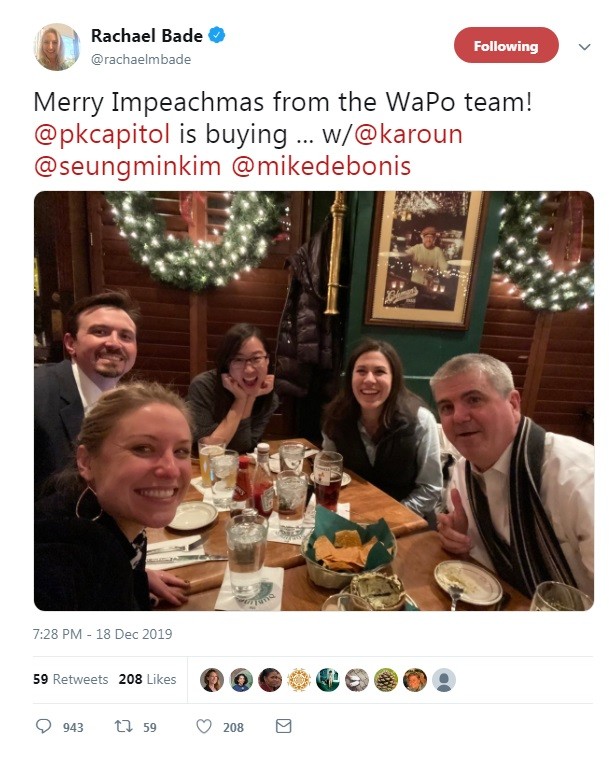 Keep in mind these despicable people would never dare wish us a “Merry Christmas,” because that actually would result in sanctions and disapproval within their social circles, a tsk-tsk from that plague of Jeffs known as Zucker and Bezos.

But this is fine.

And then — because, again, she works for an institution that is so corrupt, so deranged with hate, so bubbled and tribal, that it is okay to “own the Trumptards,” — Bade doesn’t just delete the tweet. Oh, no…

As if to prove to CNN and to the Washington Post that she truly is one of them — a shameless liar willing to shamelessly lie, she shamelessly lies with what is yet another troll of us Trumptards; she claims her tweet celebrating Trump’s impeachment, complete with a photograph of that celebration, complete with the caption “Merry Impeachmas from the Wapo team!” was nothing of the sort:

I’m deleting a tweeting tonight that is being misinterpreted by some as an endorsement of some kind. To be absolutely clear, we at the Post are merely glad we are getting a break for the holidays after a long 3 months. I will retweet the group photo w/ a better caption!

So try not to forget “journalism is worth paying for,” and that “democracy dies in darkness,” and that this is an apple not a banana, and that we would be lost without the free press and its brave firefighters, and that they most definitely are not the “enemy of the people.”