REYNOSA, Tamaulipas – The hunt for the Gulf cartel plaza boss in this border city has intensified this past week.

The man known as “Comandante Toro,” who runs the Los Metros faction of the Gulf cartel in Reynosa, has managed to evade a series of recent moves by authorities to capture him. Authorities had captured him in March, however as Breitbart Texas had previously reported, he had managed to negotiate and bribe his way out.

After the arrest of Jose Hugo “El Gafe” Rodriguez Sanchez in April, Toro ended up inheriting the criminal organization that runs the city of Reynosa.

On May 26, 2015, a shootout took place in the rural dirt road known as Becerro where a convoy of Mexican marines came upon a group of cartel gunmen; the gunmen began firing at the troops in an effort to avoid capture.

After this last shootout, authorities seized a large weapons cache, vehicles and evidence pointing to El Toro’s presence in the area. A series of photographs were leaked by citizen journalists this past week. 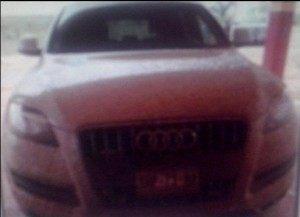 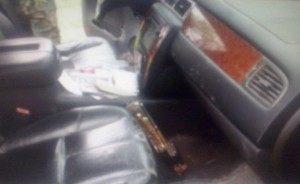 The inside of the vehicle driven by Gulf Cartel Commander Toro 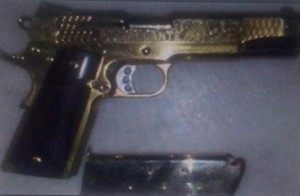 The photographs show an armored SUV belonging to the Gulf cartel commander as well as a jeweled handgun with the word “Comandante” and a drawing of a bull edged on the slide of the pistol.

In what appears to be a desperate move, on May 28, a series of banners were hoisted around town by the Gulf cartel and signed by El Toro asking the public to call the authorities to report on those committing petty crime while claiming to be part of the Gulf cartel. 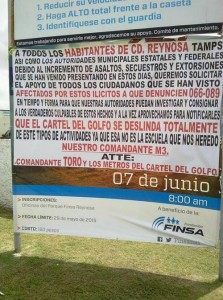 The criminal organization appears to be disorganized after the constant pressure from Mexican authorities and the ongoing internal fighting within the Gulf Cartel.