RIO GRANDE CITY, Texas—In yet another public corruption scandal on the Texas border, a judge in this city has been arrested on bribery and drug charges. “You’re going to leave me without my Christmas money,” the judge allegedly told investigators.

Starr County Justice of the Peace Salvador Zarate turned himself in to authorities Monday afternoon on a warrant charging him with two counts of bribery and one count of possession of a controlled substance, court records obtained by Breitbart Texas  revealed. 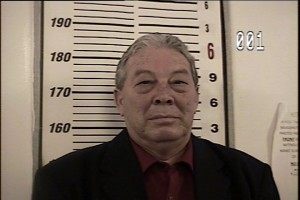 Mugshot of Starr County Justice of the Peace Salvador Zarate who has been arrested on bribery and drug charges.

Zarate stands accused of taking a single $500 bribe from two individuals on December 24, 2014, in exchange for lowering their bond.

The case began when a confidential informant told investigators that Zarate asked for $500 to reduce the bond of a man and a woman who had been arrested on drug charges. The bribe was to lower the bond from $30,000 to $5,000.

The informant acted as a go-between and went to deliver the $500 to Zarate in Rio Grande City while the investigators conducted a surveillance operation. Moments after the exchange, investigators went to Zarate’s vehicle to carry out a search. The judge had parked right outside of his office.

After the judge gave investigators the money, they searched the vehicle and found a small bag with cocaine which had been hidden inside a cigarette box.

Breitbart Texas had learned about the investigation into Zarate back in December but after meeting with one of the agencies handling the investigation had agreed to hold any stories until an arrest was made as to not jeopardize the case or tip off Zarate.

Zarate’s investigation into bribery came just before the man was set to take his oath of office for another term as a Starr County Justice of the Peace, where he has served for multiple terms.

Even before the bribery and cocaine investigation, Zarate had already been reprimanded by the State Commission on Judicial Conduct in 2003 following three separate arrests for DWI.

One DWI arrest took place on February 16, 2000, another one on October 2000 and the third arrest came on June 21, 2003. During that last arrest, Zarate told the Texas DPS trooper that he was a justice of the peace and asked, “Can you give me a break?”

The three separate DWI charges remain dormant, meaning they were never brought to trial or disposed of by Starr County Attorney Victor Canales.

The Texas border has long been a hotbed of corruption that has resulted in a parade of public officials going before the justice system on bribery or other charges. As previously reported by Breitbart Texas, the corruption levels on the Texas border are high enough that the FBI created the Public Corruption Task Force which has already resulted in multiple arrests and a large volume of open investigations.