A disabled veteran who placed a pro-cop message of “Police Lives Matter” on his truck claims to have become the victim of a vandalism attack.

“Black Lives Matter” and #FYF (F**k Your Flag) graffiti was sprayed in black paint on the outside of his truck. The vandals allegedly defaced the truck with “F**k your flag, your family, your feelings, your faith,” and tore up the inside of the truck .

#FYF911 or #FYF “black radicals” promise to hold the “imperial powers” responsible for the terrorist attacks on September 11th accountable on Friday, as previously reported by Breitbart Texas. Supporters pledge to burn white people’s symbols of “the illusion of their superiority” and their “false white supremacy.” Those include items such as the American flag, the British flag, police uniforms, and Ku Klux Klan hoods. 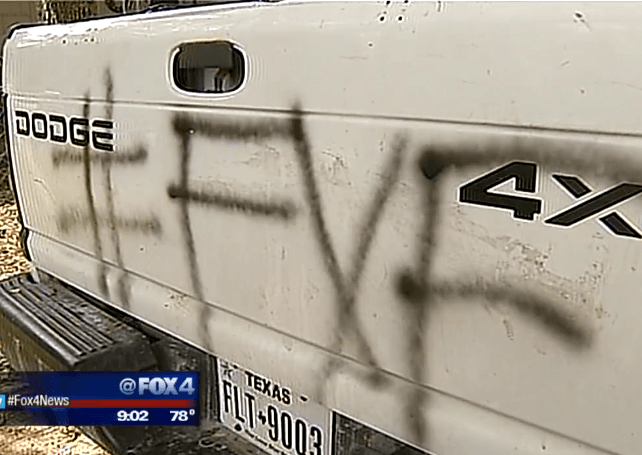 Fox 4 News in Dallas-Fort Worth interviewed the disabled veteran’s family in the video below.

“We heard about all the fallen officers for the month and [Deputy Darren] Goforth’s funeral and Back the Blue Day, and we wanted to support that,” said 18-year-old Jason Lattin. He told Fox 4 News that he has always dreamed of becoming a police officer.

Harris County Sheriff’s Deputy Darren Goforth was executed in Houston, Texas, on August 28th while he was putting gas into his car at a Chevron gas station.

The Lattin family decorated the fence of their Whitney, Texas, home with blue ribbons to show support for law enforcement. Witney is located about half-way between Fort Worth and Waco.

“They need support so they can feel that what they do, putting their lives on the line every day, is worth it,” said Scott Lattin, Jason’s father.

“Engage me in a dialogue,” said Scott. “Don’t destroy my stuff; it’s the only truck we have and because of this, it’s totaled now…. I firmly believe black lives matter, white lives matter, police lives matter. Yes, absolutely.” 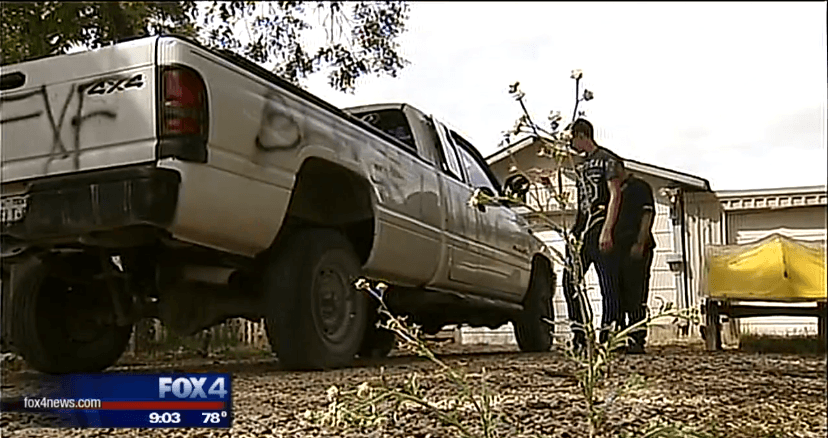 “They tore off our glove box. They took our laptop, our scanner and ripped our seats,” Jason Lattin told Fox 4 News.

Whitney Police Officer Chris Chadwick told Fox 4 News that kids might have vandalized the property. He added, it still troubles him “Because this is where it starts. It starts out as spray paint on a truck, and then it could escalate.”

Breitbart Texas reported on August 28th that members of the #FYF911 or #FukYoFlag and #BlackLivesMatter movements called for the lynching and hanging of white people and cops. They encouraged others on a radio show to “turn the tide” and kill white people and cops to send a message about the killing of black people in America.

New Black Panthers marched on the Waller County Jail where Sandra Bland died and shouted, “You’re gonna stop doing what you’re doing, or we will start creeping up on you in the darkness,” as reported by Breitbart Texas. The deputy was executed just 30 miles down the road two weeks later.

At a press conference attended by Breitbart Texas the day after Deputy Goforth’s execution, Harris County Sheriff Ron Hickman said, “This rhetoric has gotten out of control.” He continued, “We’ve heard ‘black lives matter,’ ‘all lives matter,’ well cops’ lives matter too.” The visibly emotional Hickman continued, “Why don’t we just drop the qualifier and say ‘lives matter.’ Take that to the bank.”

This article has been updated throughout.