Thousands of people turned out to honor Hatch, New Mexico Police Officer Jose Chavez as his flag-draped coffin was transported from Albuquerque to his hometown of Las Cruces.

A large motorcade of police officers from across the state and country joined in a 225-mile journey to take the fallen officer home for the last time. Officer Chavez was killed on Friday afternoon during a traffic stop, Breitbart Texas reported. The small-town officer was shot point-blank as he approached the passenger window of a vehicle carrying two men from Ohio who are allegedly wanted for murder. 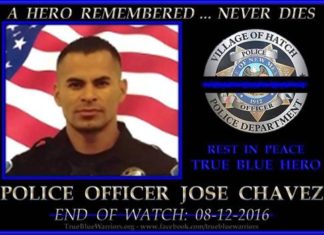 Following an autopsy in Albuquerque, a procession lined up to carry the officer’s body south along Interstate 25, through his community of Hatch and on to Las Cruces where he will be laid to rest. As the procession headed southward, people lined the streets to pay their respects to Officer Chavez. In addition to police motorcycles and vehicles escorting the body, firetrucks in communities along the route erected flag-bearing ladder bridges as a sign of respect and mourning.

One observer told KFOX14 he was there with his children to show respect.

“We feel bad for him, his family especially. His two young kids,” Lea Lucero said. Her husband, Raymond told the Fox reporter, “We have a lot of friends and family that are in law enforcement and they definitely don’t get paid enough for what they do.”

The final journey for Officer Chavez lasted over three hours as he returned to his home.

“But I’ll see him again sometime and we will smile and talk about family and I’ll tell him how much I miss him.” He remembered that the officer always made him feel safe. On the counter of his store was a donation jar for Chavez’ family.

Chavez was the 35th police officer to be shot and killed in the line of duty this year. Since his death on Friday, two other officers have been shot and killed.

Republican presidential candidate Donald Trump told a group gathered in Wisconsin Tuesday night, “The war on our police must end and it must end now,” Breitbart’s Alex Swoyer reported. The remarks came during a law-and-order policy speech that drew a sharp contrast with his opponent, Hillary Clinton.

Speaking to the violence that has erupted in many minority communities over the past year, Trump said, “Law and order must be restored … it must be restored for the sake of all, but most especially for those living in the affected communities. The main victims of these riots are law abiding African American citizens living in these neighborhoods.”

“Crime and violence is an attack on the poor and will never be accepted in a Trump administration,” Trump vowed.

“A vote for her [Hillary Clinton] is a vote for another generation of poverty, high crime, and lost opportunities,” he jabbed. He reminded voters that the cities most effected by high crime are the cities like Baltimore, Chicago and Milwaukee that have been under Democrat political control for decades.

He went on to make a strong appeal for African-American voters to reject policies that work against their own self-interest.

I’m asking for the vote of every African American citizen struggling in our country today that wants a different and much better future,” Trump said. “It’s time for our society to address some honest and very difficult truths. The Democrat Party has failed and betrayed the African American community.”

“I’m fighting for you,” the GOP nominee concluded, and for “peaceful regime change in our own country.”