The apprehension of Family Unit Aliens (FMUA) and Unaccompanied Alien Children (UAC) saw dramatic increases despite substantial existing records. The total apprehensions of illegal immigrants rushing into the U.S. ahead of the 2016 General Election also jumped nearly 17 percent over the prior month.

President-Elect Donald Trump told reporters on Thursday that he will make immigration one of his top priorities, Breitbart News reported.

Earlier this month, Breitbart Texas reported that cartel smugglers were using the U.S. elections as a “marketing tool” to bring more illegal immigrants to the U.S. border. That marketing ploy was apparently successful. 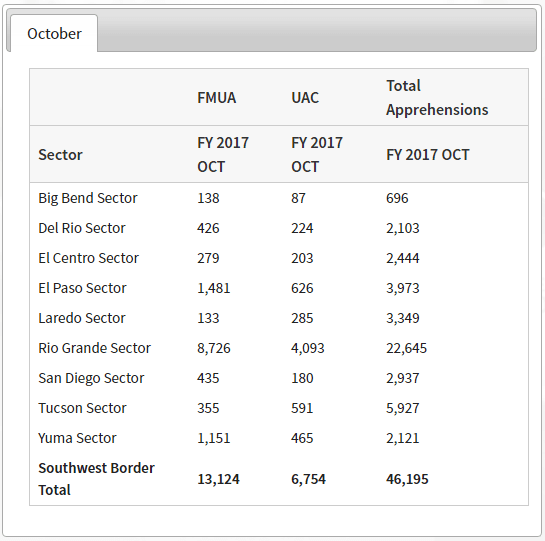 “In October a total of 46,195 individuals were apprehended between ports of entry on our southwest border, compared with 39,501 in September and 37,048 in August,” Department of Homeland Security (DHS) Secretary Jeh Johnson said in a written statement obtained by Breitbart Texas. “Within these totals, we have seen corresponding increases in the numbers of unaccompanied children and individuals in families apprehended. We’ve also seen increases in the numbers of those who present themselves at ports of entry along the southwest border seeking asylum.”

Johnson said the flood of immigrants has increased the population in detention facilities to about 41,000. This represents an increase of 7,000 to 10,000 people over normal average detentions. “I have authorized Immigration and Customs Enforcement to acquire additional detention space for single adults so that those apprehended at the border can be returned to their home countries as soon as possible,” the DHS secretary stated.

Once again, the Rio Grande Valley (RGV) Sector saw the brunt of the alien influx.

“The cartel uses what happens in the U.S. as a marketing tool in Central America,” Mayor Darling said. “The need is there (in Central America) but what happens in Washington and the way the news media presents it, they (cartels) say you better get up here. So that causes the surges … We”ll see what happens after the election to see if it slows down.” McAllen is ground zero in the flood of illegal immigrants crossing in the RGV sector.

These totals mean that Border Patrol agents were tied up with processing at least 19,878 minors.

“The smugglers learned in 2014 that they could tie up Border Patrol agents as babysitters and keep us from our primary mission of stopping illegal border crossings and drug smuggling,” U.S. Border Patrol Agent Chris Cabrera told Breitbart Texas in his capacity as president of National Border Patrol Council Local 3307 in an interview on October 26. “When are we going to get back on the border?”

“In 2014, it was primarily the Rio Grande Valley Sector that saw the massive numbers of families and children,” Cabrera explained. “Now we are seeing increases in every sector–some as high as 200 percent.”

Total apprehensions of all illegal immigrants who crossed the borders outside of designated ports of entry were 46,195. This represents a nearly 17 percent increase over September. Those numbers had also been increasing nearly every month (with the exception of the summer months of June and July). Of the total number in October, nearly half (49 percent) were apprehended in the RGV Sector and 35,210 were apprehended in the six Texas sectors.

“Those who attempt to enter our country without authorization should know that, consistent with our laws and our values, we must and we will send you back,” Secretary Johnson stated. “As difficult as circumstances may be in Central and South America and the Caribbean, our borders cannot be open to illegal migration.”

This article has been updated to reflect a change in terminology.